Fresh selloff in seen in Dollar as we enter into US session. Euro was lifted earlier today by strong PMIs. But it could be taken over by Yen before weekly close. Mild risk aversion in Europe is keeping Yen afloat. US futures are mixed at the time of writing, but looks vulnerable. As for the week, Dollar is set to end as the worst performing, followed by Aussie and Loonie. Yen will likely end up as the strongest, followed by Euro.

Technically, USD/JPY’s break of 107.75 is another sign of Dollar weakness, and it could be heading to next fibonacci level at 105.77. Now, our attention will be on when EUR/USD would break through 1.2079 temporary top to resume the rebound form 1.1703. Besides, USD/CHF may follow and break through 0.9127 temporary low too.

Chris Williamson, Chief Business Economist at IHS Markit, said: “Companies are reporting a surge in demand for both goods and services as the economy opens up from lockdowns and the encouraging vaccine roll-out adds to a brighter outlook. In more than 23 years of PMI history, we have only seen one spell of faster growth than this, recorded between August and November 2013”.

Phil Smith, Associate Director at IHS Markit said: “The third wave of the pandemic has stifled progress in Germany’s service sector, with April ‘s flash PMI data showing activity close to stalling following the return to growth at the end of the first quarter. The country’s manufacturing sector remains on a strong footing, though even here the data show growth being held back by supply problems.

Eliot Kerr, Economist at IHS Markit said: “Latest PMI data pointed to the first increase in private sector activity since the end of the initial COVID-19 rebound last summer. The result was a continuation of the improved trend seen in recent months, but previously growth had remained elusive due to an ongoing decline in the service sector. However, with an expansion in services activity and another strong rise in manufacturing production during April, the French private sector finally managed to achieve growth.”

Japan CPI core (all-item less fresh food) improved to -0.1% yoy in March, up from -0.4% yoy, above expectation of -0.2% yoy. But that’s still the eight straight months of negative reading. Further fall in core inflation is expected due to drag from mobile phone fee cuts. All-item CPI rose to -0.2% yoy, up from -0.4% yoy. CPI core-core (all-item less fresh food and energy) also ticked up to 0.3% yoy from 0.2% yoy.

Separately, BoJ Governor Haruhiko Kuroda told reiterated to the parliament, “when Japan’s inflation approaches our target, we will deliberate an exit strategy at our policy-setting meeting including details such as the timing and means for selling ETFs.” But for now, inflation remains distant from target.

Usamah Bhatti, Economist at IHS Markit, said: “While some Japanese private sector businesses noted that a resurgence in COVID-19 cases could dampen prospects in the second quarter of the year, firms remained optimistic that overall business activity would improve in the coming 12 months. That said, there is concern the impact of the pandemic will be prolonged further.”

Pollyanna De Lima, Economics Associate Director at IHS Markit, said: “Australia’s private sector started the second quarter on a strong footing, with growth of output accelerating for the second time in a row to the steepest on record as sales were boosted by improved market confidence due to a reduction in the negative impact of COVID-19.

“The stronger growth momentum filtered through to the labour market… The overall degree of business sentiment improved from March’s seven-month low and was above its average… Ongoing supply-chain disruptions continued to exert upward pressure on inflation. The flash results highlighted the steepest increases in both input costs and selling charges since the inception of the survey.” 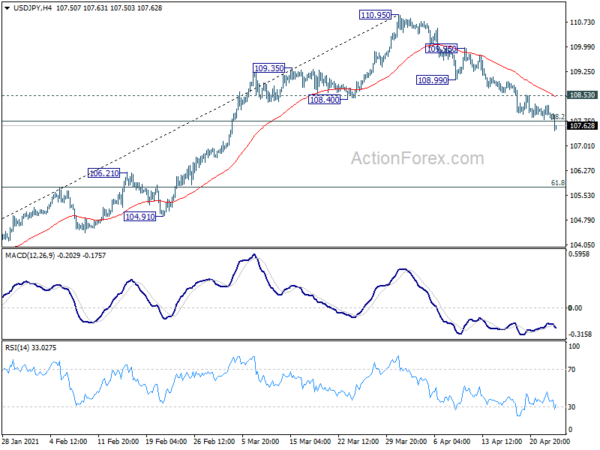 In the bigger picture, current development suggests that rise from 102.58 might have completed at 110.95, as the third leg of the pattern from 101.18 low. Medium term outlook is neutral first, as the pair could have turned into sideway trading between 101.18/111.71. We’d look at the structure and momentum of the fall from 110.95 to gauge the chance of upside breakout at a later stage. 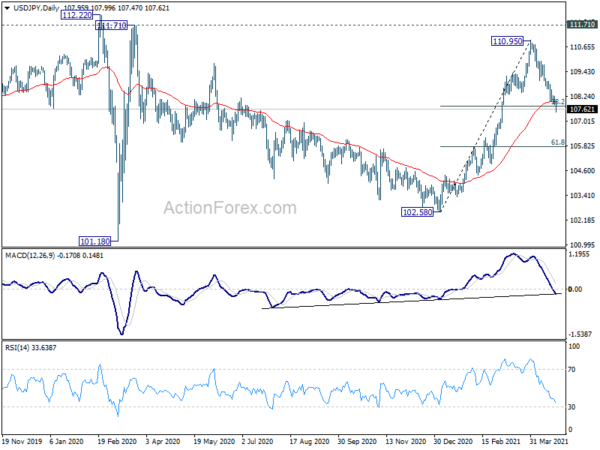