Global equities are under selling pressure today with another round of rise in treasury yields. In particular, Germany 10-year yield jumped above -0.1% handle and hit the highest level since mid-2019. The development came after stronger than expected inflation reading from UK, which was later followed by Canada CPI. New Zealand Dollar and Australian Dollar are the weakest ones for now, followed by Swiss Franc. Dollar and Euro and the strongest, followed by Canadian.

Technically, on focus now is whether the selloff in equities would intensify and push commodity currencies lower. In particular, break of 0.7687 support in AUD/USD would indicate completion of rebound from 0.7530, and bring retest of this low. Similarly, break of 0.7133 support in NZD/USD will indicate completion of rebound form 0.6942 and bring retest of this support. The development could depend on FOMC minutes to be featured later in the session. 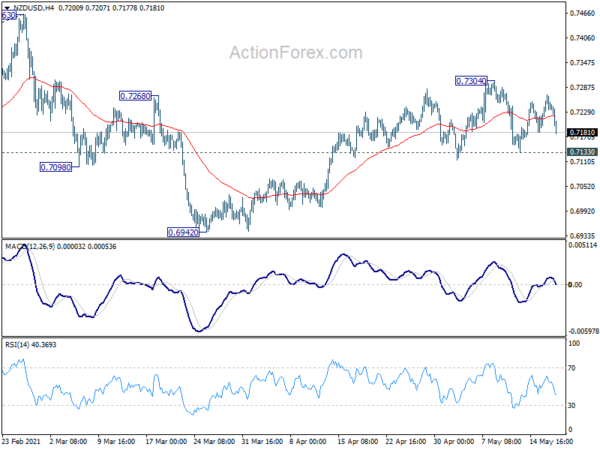 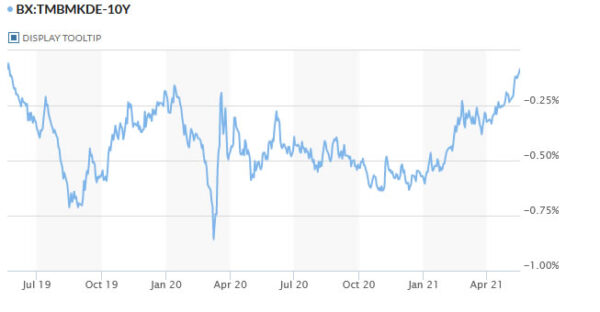 ECB Vice President Luis de Guindos said today that “as the euro area emerges from the third wave of the pandemic, risks to financial stability remain elevated and have become more unevenly distributed.”

As fiscal support is “gradually removed”, “considerably higher insolvency rates than before the pandemic cannot be ruled out, especially in certain euro area countries,” he added. “Extensive policy support, particularly for corporate, could gradually move from being broad-based to more targeted.”

He also noted that “the present level of yields permits that the financing conditions of the governments as well as… for households and corporates are favourable.”

The comments on yields came as Germany 10-year yield breaks above -0.1 level today, hitting the highest level since mid-2019.

BoJ Kuroda: Risks to outlook skewed to the downside

BoJ Governor Haruhiko Kuroda said today that “for the time being, risks to Japan’s economic outlook are skewed to the downside,” even though, it’s likely to “recover on rising external demand” on the back of fiscal and monetary support.

He expected the economy to resume a “sustainable growth path as rising income supports spending”. Capex would more rise more clearly ahead as corporate profits improve.

On inflation, Kuroda said the impact of mobile fees on CPI is likely temporary. He doesn’t expect Japan to return to deflation.

“Economic activity will remain below post-pandemic levels for the time being,” he added. “The near-term focus would be to respond to the pandemic’s impact.” “Taken into account the impact of the pandemic, we will consider extending further” the measures to ease funding strains.

Australia Westpac-Melbourne Institute consumer sentiment dropped -4.8% mom to 113.1 in May, down from 118.8. Still, it’s the second highest print for the index since April 2010. Westpac said, “The fall may also represent some disappointment in the Federal Budget as a very generous Budget was still unable to exceed the exuberant expectations of the community.”

On RBA policy, Westpac expects the board to extend QE to a further AUD 100B starting in September, and to switch the target bond in the yield curve control from April 2024 to November 2024. It said, “this view is based on the expectation that the Board will be committed to monetary stimulus (reducing QE or restricting YCC to the April bond are akin to tightening policy) for the remainder of 2021.”

“Lower lake levels in the South Island have driven up wholesale prices for electricity generation, while an unexpected fall in production at the Pohokura gas field has seen gas supply prices also increase,” business prices delivery manager Bryan Downes said. “The quarterly price change is the largest since 2018 but is nowhere near the magnitude seen in the 2008 power crisis.”

GBP/USD retreats ahead of 1.4240 high and intraday bias is turned neutral first. Further rise is still expected as long as 1.4004 support holds. Decisive break of 1.4240 will resume whole up trend from 1.1409 to 1.4376 key resistance next. However, break of 1.4004 will delay the bullish case. Intraday bias will be turned back to the downside to extend the consolidation pattern from 1.4240 with a another falling leg. 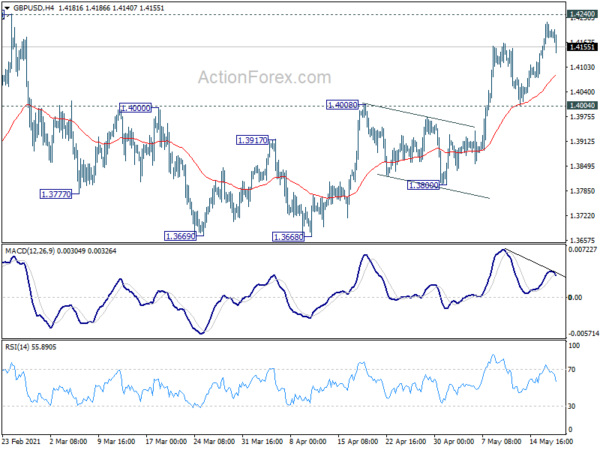 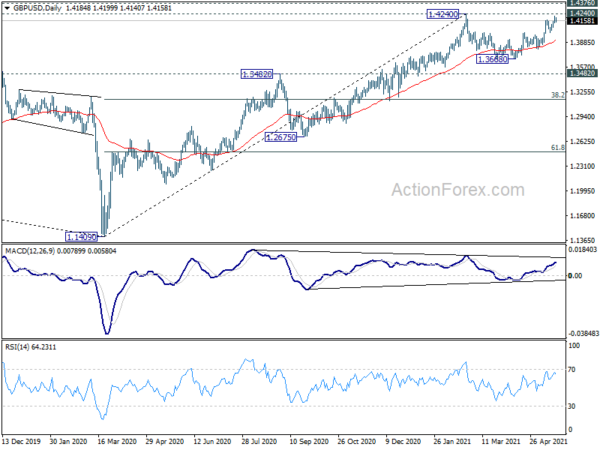