Trading remains relatively subdued in Asian session today. Aussie firmed up slightly, but lost momentum after RBA delivered no surprise to the markets. Sterling is also trying to break through a key near term resistance against Dollar, but there is no follow through buying yet. The greenback, on the other hand, is turning softer, but there is no clear committed upside momentum in Euro. Overall, the markets are still awaiting breakout from the near term ranges.

Technically, gold breaches 1912.56 temporary top and looks ready to resume the rise from 1676.65. Focus will now be on any sign of upside acceleration above 1912.56, towards 1959.16 resistance. Firm break of 1959.16 will raise the chance of long term up trend resumption through 2075.18 high. That, if happens, could be accompanied by renewed selling in Dollar. But break of 1882.07 support will suggest short term topping and bring deeper pull back. Dollar could then be rebounding more strongly in this case. 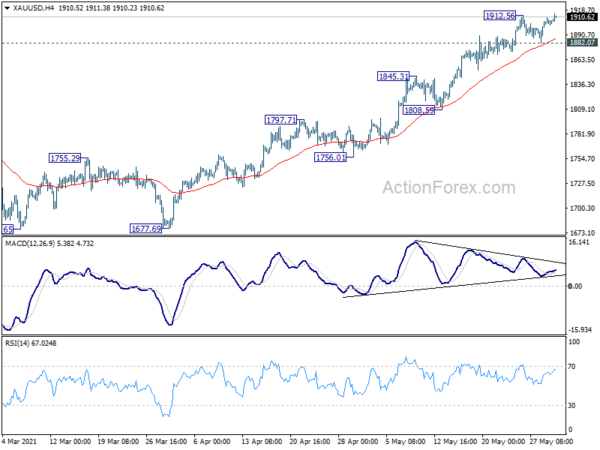 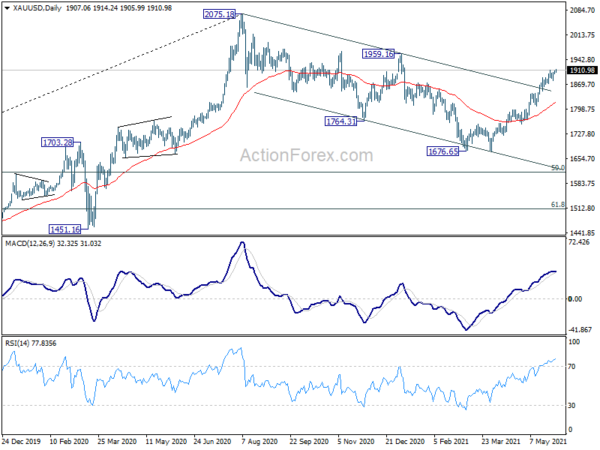 RBA left monetary policy unchanged as widely expected. Cash rate target and 3-year AGB yield target are both kept at 0.10%. Parameters of asset purchases are kept unchanged too. It maintained the pledge to keep “highly supportive monetary conditions” to support return to full employment and inflation consistent with target. Also, the conditions for rate hike are unlikely to be matched “until 2024 at the earliest.

The central bank said economic recovery is “stronger than earlier expected and is forecast to continue”. The central scenario is for GDP to grow 4.75% this year and 3.50% next. Progress in reducing unemployment “has been faster than expected”. Further decline is unemployment rate to 5% by year end is expected. Inflation and wage pressures are “subdued”.

At the July meeting, RBA will consider whether to move the target bond for the 3-year yield target to November 2024 bond. It will also decide then whether to extend the government bond purchase program after September.

Australia AiG Performance of Manufacturing rose 0.1 pt to 61.8 in May. That’s the eighth consecutive month of recovery for the MI, and the highest result since March 2018. It’s also the fourth highest reading on record. Six of seven activity indicators expanded, while only the exports active index indicated a contraction.

Ai Group Chief Executive Innes Willox said: “Australia’s manufacturing sector maintained its rapid pace of expansion in May fuelled by strong demand from the construction sector, a pick-up in business investment and healthy demand from households…While the new Victorian lockdown will dampen enthusiasm somewhat, these conditions are likely to be setting the stage for a lift in investment by manufacturers.”

Japan PMI Manufacturing was finalized at 53.0 in May, down from April’s 53.6. That signaled a softer but still moderate improvement in the health of the sector. There were further expansions in output and new orders, and second successive rise in employment levels. Positive sentiment remained elevated.

Usamah Bhatti, Economist at IHS Markit, said: “May data marked a sustained improvement in the health of the Japanese manufacturing sector, as the latest Manufacturing PMI painted a different picture to 12 months ago. A continued recovery from pandemic-related disruption has now extended to four months…. Japanese goods producers remained optimistic in the year ahead outlook for activity. Firms were hopeful that the pandemic would subside and induce a broad recovery in demand across the sector. IHS Markit estimates that industrial production will rise by 8.8% in 2021.”

Wang Zhe, Senior Economist at Caixin Insight Group said: “To sum up, manufacturing expanded in May as the post-epidemic economic recovery kept its momentum. Both domestic and overseas demand were strong and supply recovered steadily. The job market remained stable. Manufacturers stayed confident about the business outlook as the gauge for future output expectations was higher than the long-term average. Inflation was still a crucial concern as prices continued rising.”

Swiss National Bank, Vice Chairman Fritz Zurbruegg, said in a Corriere del Ticino interview that, “we believe the franc is still high.” “If we look at inflation, it is still very low and GDP is not yet at the pre-crisis levels,” he said. “That is why we are convinced that our expansionary monetary policy remains appropriate.”

“We have to bear in mind that in a small and open country like ours, the exchange rate has a major impact on both inflation and economic growth,” he said. “For this reason, it is important to maintain the instrument of foreign exchange interventions alongside the classic interest rate instrument.”

“Without this expansionary policy, we would have a much stronger franc, lower growth and inflation and higher unemployment,” he said. “So the average Swiss citizen is better off thanks to our policy.” 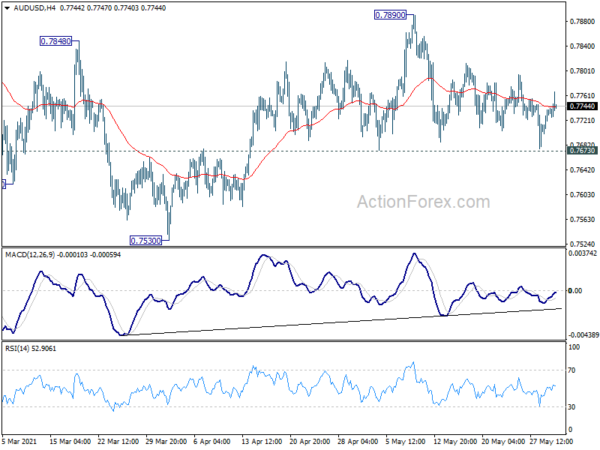 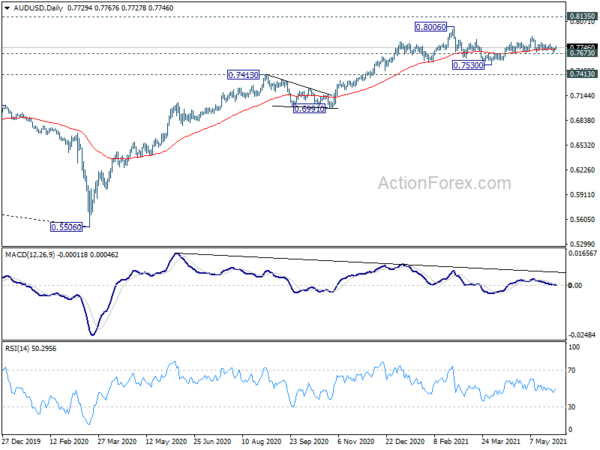