Falling global yields and mild risk off sentiment continue to boost Japanese Yen. On the other hand, Australian Dollar is leading other commodity currencies lower. But the forex markets are mixed elsewhere for now. Dollar and European majors are stuck in near term ranges against each other. Eyes will turn to US consumer inflation data today, and see if that could trigger breakouts in Dollar pairs.

Technically, the pull back in AUD/JPY is turning out to be deeper than expected and threatens the near term up trend at least. Focus is on 55 day EMA (now at 82.98) and sustained break there would open the case for deeper fall back to 77.88 key structural support. Nevertheless, rebound from 55 day EMA, followed by break if 84.16 minor resistance will revive near term bullishness, and bring stronger rise through 86.24 high. We’ll see how the cross reacts to development in both stocks and yields ahead. 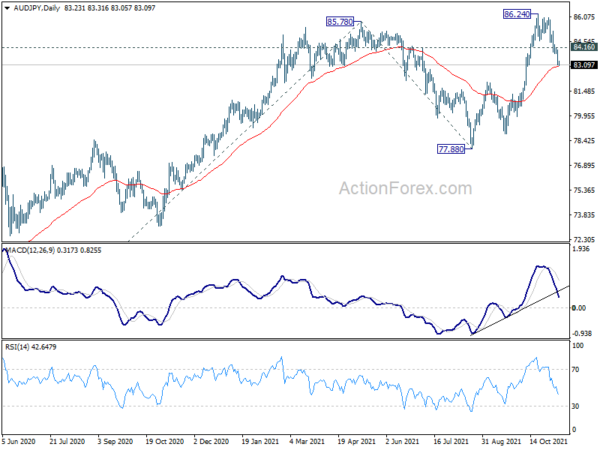 Fed Daly looking at summer 2022 for some clarity

San Francisco Fed President Mary Daly urged patience to wait-and-see before acting on interest rates. She warned that if Fed hikes too soon, it will do very little on inflation, but “absolutely” reduce the pace of job growth. “That’s too much risk to take when we don’t have any indication that these are today persistent trends,” she said.

“I’m looking at the summer of 2022 is when we should – knock on wood, no more variants, no more delta surges – get some clarity,” she said.

On prices, she said, “as we get through the pandemic, we’ll see prices moderate and we’ll be back to that situation in which we had for more than a decade of forces pushing inflation down, not pushing inflation up.”

Fed Kashkari: We are getting these mixed signals out of the economy

Minneapolis Fed President Neel Kashkari said he is keeping an “open mind” on the timing of rate hike and “I have not made any decisions about where my stance is on that.”

“We are getting these mixed signals out of the economy,” he added, referring to rising wages while jobs were still 5 to 7 million short of pre-pandemic levels. “I’m optimistic, in the next three, six, nine months we will get a lot more information,” he said.

He also said, “if the labor force does not return, then that’s going to give me more concern that the high inflation readings that we’ve been seeing may be sustained, because that means that hey, we are already at or maybe we are close to our economy’s potential.”

Australia Westpac Consumer Sentiment rose 0.6% to 105.3 in November, up from 104.6. Looking at some details, the index on economic conditions for the next 12 months improved from 103.2 to 106.6, as reopening of major cities looked to have shored up confidence. Unemployment expectations index dropped notably from 107.1 to 95.3, as more consumers expect unemployment to fall than rise.

Westpac expects RBA to continue with the current AUD 4B per week asset purchases to continue as planned till February, and then reduce it to AUD 2-3B until next most likely review in May. Yet, if RBA assess that the pace of achieving its targets is satisfactory, it could decide to cut taper to ADU 2B per week and Fed, and than end the program altogether by May.

ANZ said: “Overall, the survey shows an understandable wariness as we move into a COVID-endemic world. The one certainty is that costs are through the roof.”

Germany CPI final and Italy industrial output will be featured in the European session. Main focuses will be on US CPI and jobless claims.

USD/JPY’s fall from 114.69 is still in progress and intraday bias stays on the downside. For now, we’d expect downside to be contained above 112.07 resistance turned support to bring rebound. On the upside, break of 113.65 minor resistance will turn bias back to the upside for retesting 114.69. However, sustained break of 112.07 will dampen our bullish view and bring deeper fall back towards 109.11 structural support. 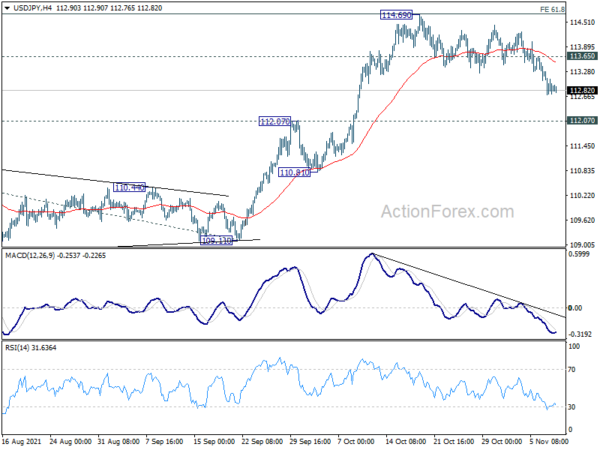 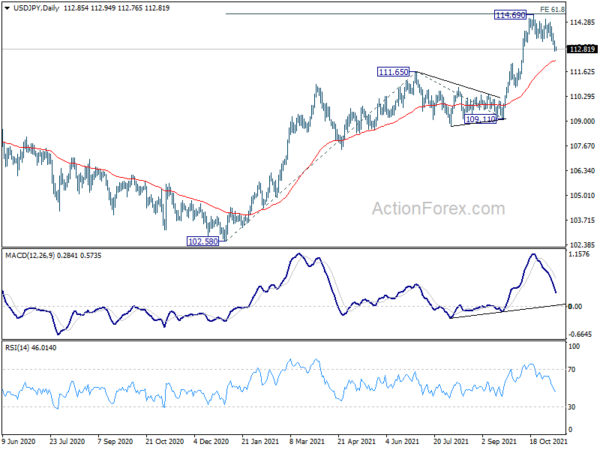