Worries about Omicron remains a main theme in the markets. Nikkei takes a dive after Japan announced to close its borders to all foreigners as Prime Minister Fumio Kishida said he’s taking measures with a “strong sense of crisis”. The forex markets are relatively quiet for now, with Yen and Swiss Franc digesting some of last week’s gains. Commodity currencies are also recovering slightly. But overall, the range in currency pairs is tight.

Technically, the rallies in Swiss Franc and Yen are just taking a breather and we’d expect them to resume sooner or later. The question for the week is whether risk-off sentiment would boost Dollar or Euro more. EUR/USD’s weak recovery from 1.1185 doesn’t warrant a stronger rebound yet. But break of 1.1373 minor resistance will indicate that the tide has turned for the near term. 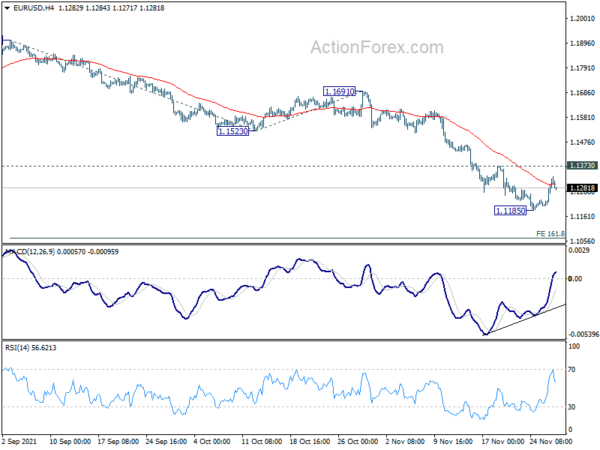 ECB Lagarde: We are all better equipped to respond to Omicron

ECB President Christine Lagarde said over the weekend that there is an “obvious concern” about the Eurozone economic recovery with the new Omicron variant. But she added, “I believe we have learnt a lot”.

“We now know our enemy and what measures to take. We are all better equipped to respond to a risk of a fifth wave or the Omicron variant”, she said to Italian broadcaster RAI.

“The crisis taught us this virus knows no boundaries. Therefore we will not be protected until we are all vaccinated”, Lagarde said.

ECB Executive Board member Fabio Panetta said the current inflation in Eurozone is bad but also temporary. It’s driven by supply chain disruptions and energy prices which are “bound to be overcome”. He would be among the first in favor to intervene if inflation are becoming more permanent.

But he added, “the central bank is not intervening because if it did, it would create more damage than benefit. It’s like an illness, not all medicines are good for all illnesses.”

In a WSJ interview, RBNZ chief economic Yuong Ha said the central bank would have raised interest rate even if Omicron was know before the meeting last week.

He said New Zealand is now “transitioning into a new Covid protection framework” and people are “getting used to the idea of living with Covid”. Hence, Omicron doesn’t change the outlook. “It probably just reinforces the downside risks we saw in the projections,” he said.

RBNZ will be in a better place to assess Omicron’s economic impact at next meeting in February. “If Omicron turns out to be a massive game changer, that might be kind of like August where we just took a pause,” Ha said.

A number of important economic data will be released this week. US consumer confidence, ISM indexes and non-farm payroll will catch most attention. Eurozone will release CPI flash, PPI, unemployment rate, retail sales. Focuses will also be on Canada employment, Australia GDP, and China PMIs.

But, the economic would be overshadowed by news regarding Omicron variant and the impact on risk sentiment.

Intraday bias in AUD/USD remains on the downside for the moment. Break of 0.7105 support will confirm resumption of whole decline form 0.8006. Next target should be 0.6991 key structural support. On the upside, break of 0.7208 minor resistance will delay the bearish case and turn intraday bias neutral first. 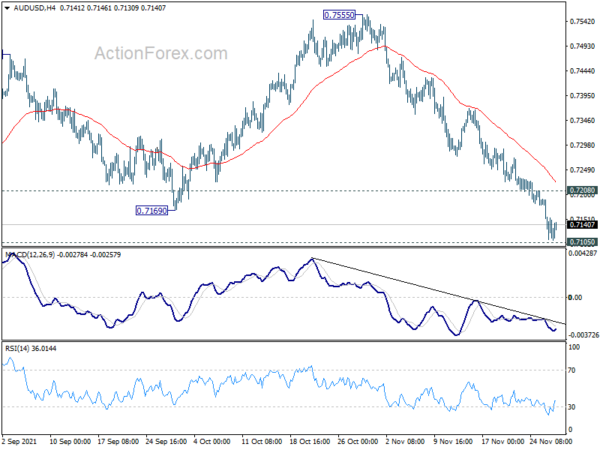 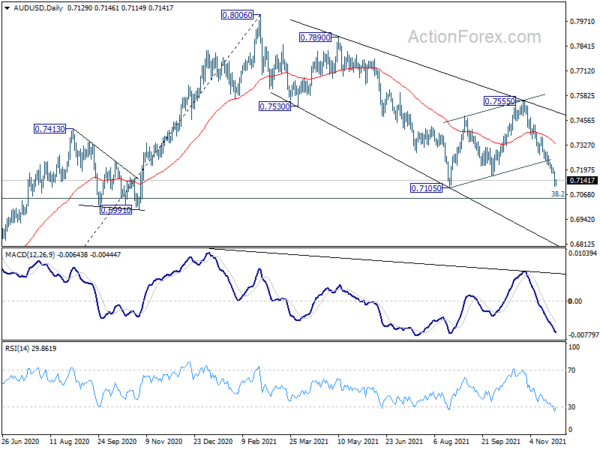