Sterling rises broadly after BoE surprised the markets by raising interest rates and maintains a hawkish tone. Solid risk-on sentiment as well as strong job data boosts Aussie as the second strongest. Euro is not performing badly after ECB announces to end PEPP net purchases in March. Indeed, the common currency is trying to catch up with the Pound. On the other hand, Dollar is trading broadly lower despite Fed’s hawkish turn yesterday. Yen is even weaker while Swiss Franc is not too far behind.

Technically, near term bullishness in Sterling and Aussie is rather apparent with break of resistance levels against Dollar. We’ll now see if EUR/USD would break through 1.1382 resistance to give Dollar another punch. 0.9156 support in USD/CHF is another level to watch. 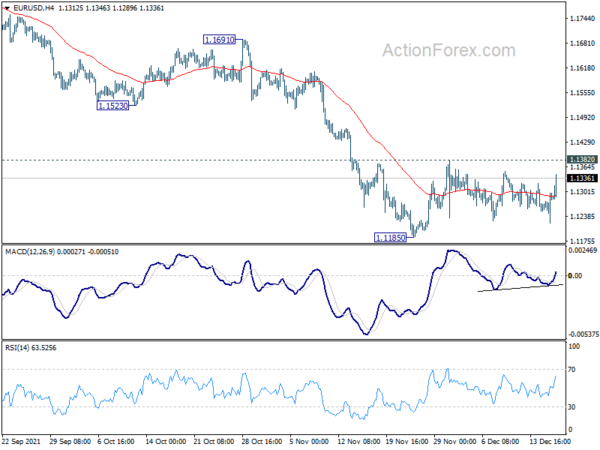 US initial jobless claims rose back to 204k, continuing claims dropped to 1.85m

The central bank said it will review developments, including the impact of Omicron, in the February Monetary Policy Report, with focus on medium term prospects for inflation. There are “two-sided risks around inflation outlook in the medium term”. But, “some modest tightening of monetary policy over the forecast period is likely to be necessary to meet the 2% inflation target sustainably”.

UK PMI composite dropped to 53.2, hit once again by COVID-19

Chris Williamson, Chief Business Economist at IHS Markit, said: “The flash PMI data show the UK economy being hit once again by COVID-19, with growth slowing sharply at the end of the year led by a steep drop in spending on services by households. Some brighter news came through from manufacturing, where an easing of supply chain delays helped lift production growth, but more importantly also helped take some upward pressure off prices to hint at a peaking of inflation.”

ECB announced to “discontinue”net asset purchases under the pandemic emergency purchase programme (PEPP) at the end of March 2022. Reinvestment horizon for PEPP will be extended until at least the end of 2024.

Monthly net asset purchases under the original asset purchase programme (APP) will be doubled to EUR 40B in Q2, then slow to EUR 30B in Q3, and back to EUR 20B in Q4 for “as long as necessary”.

Meanwhile, main refinancing rate, marginal lending facility rate and deposit facility rate were held unchanged at 0.00%, 0.25%, and -0.50% respectively. Forward guidance is maintained that there will be a “transitory period in which inflation is moderately above target.”

Eurozone PMI composite dropped to 53.4, another blow from COVID-19

Chris Williamson, Chief Business Economist at IHS Markit said: “The eurozone economy is being dealt yet another blow from COVID-19… Germany is being especially hard hit, seeing the economy stall for the first time in a year-and-a-half, but the growth slowdown is broad based across the region.

“Encouragement comes from the manufacturing sector, where the strain on supply chains is showing some signs of easing, in turn helping to revive factory production… Easing supply constraints have alleviated some of the upward pressures on inflation, though the overall rate of price increase in December was still the second-highest on record. While inflation could soon peak, the rate of increase remains elevated.”

SNB kept the sight deposits rate unchanged at -0.75% as widely expected. It also remained “remains willing to intervene in the foreign exchange market as necessary, in order to counter upward pressure on the Swiss franc”. The Swiss Franc “remains highly valued”.

As for the economy, the baseline scenario is a “continuation of the economic recovery next year”. SNB expects GDP growth of around 3% for 2022 while unemployment is “likely to decline again somewhat”.

Annabel Fiddes, Economics Associate Director at IHS Markit, said: “The latest Flash PMI data showed that the Japanese private sector recovery was sustained in December, rounding off the best quarterly performance since Q4 2018. However, both manufacturers and services companies signalled softer rates of output and new order growth compared to November, to suggest a softening of momentum.”

GBP/USD’s break of 1.3351 support turned resistance indicates that a short term bottom was formed at 1.3158 already. More importantly, it’s the first sign that correction from 1.4248 has complete with three waves down to 1.3158, after defending 1.3164 key medium term fibonacci level. Intraday bias is back on the upside for 1.3570 support turned resistance first. Firm break there will affirm this bullish case. On the downside, however, sustained break of 1.3164 will carry larger bearish implications. 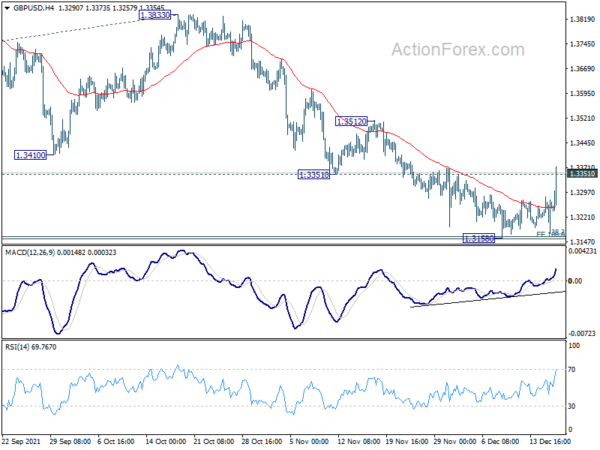 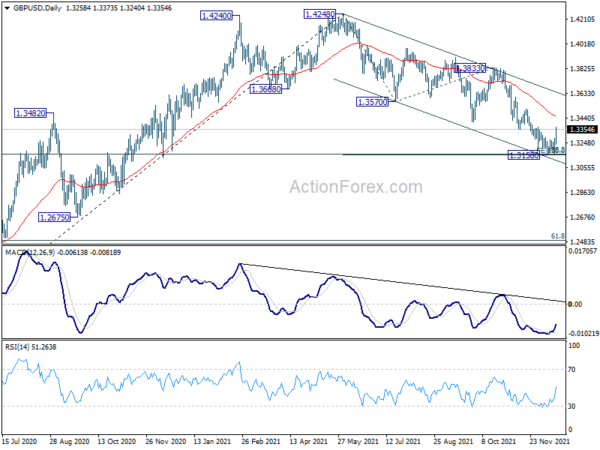