Euro is staying under selling pressure as Russia is continuing its invasion while Ukrainians are holding on defending their country. But selloff in Sterling has eased a little bit. Australia Dollar is extending recent rally as the best performer for the week. Canadian Dollar is following closely with help from BoC’s rate hike overnight, and persistent rally in oil prices. Dollar and Yen are mixed while Swiss Franc upside momentum diminished slightly.

Technically, WTI crude oil has met first medium term target of 100% projection of 33.50 to 85.92 from 62.90 at 115.32 already and there is no sign of stopping yet. It should be noted again that fear-driven moves in commodity markets could be extremely powerful. A clear example was the negative oil price at the start of the pandemic less than two years ago. Sustained break above 115.32 could prompt even more upside acceleration to 161.8% projection at 147.71, in rather quick manner. The implication on inflation, monetary policy, stocks, yields and FX would be rather complicated. 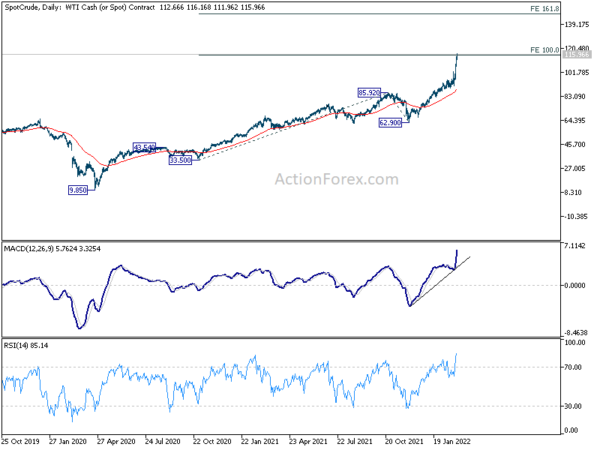 In the semiannual testimony to Congress yesterday, Fed Chair Jerome Powell said,”with inflation well above 2 percent and a strong labor market, we expect it will be appropriate to raise the target range for the federal funds rate at our meeting later this month.”

He reiterated that “federal funds rate is our primary means of adjusting the stance of monetary policy”. And, “reducing our balance sheet will commence after the process of raising interest rates has begun, and will proceed in a predictable manner primarily through adjustments to reinvestments.

Powell also said, “the near-term effects on the U.S. economy of the invasion of Ukraine, the ongoing war, the sanctions, and of events to come, remain highly uncertain. Making appropriate monetary policy in this environment requires a recognition that the economy evolves in unexpected ways. We will need to be nimble in responding to incoming data and the evolving outlook.”

Referring to Russia invasion of Ukraine, BoE MPC member Silvana Tenreyro said yesterday, “recent developments will intensify the terms of trade shock that we were already experiencing, so will push up inflation and have a negative impact on activity. How exactly? That’s the job we will start next week.”

Tenreyro added that she had been surprised by the scale of wages growth. However, “when you are talking about spirals, you are talking about explosive dynamics which we haven’t seen yet. If anything, we are just starting the first round, so how can you talk about second round (effects)” she said.

BoE Deputy Governor Jon Cunliffe said yesterday, “the events of the last few days have led to an abrupt shift in our expectations of the future and an increase in uncertainty.”

“The heightened perception of geopolitical risks, and the potential impacts on growth and inflation, can only increase risks around the adjustment away from riskier assets that is already underway,” he said.

Cunliffe added, “Russia is a relatively small part of the world economy, accounting for around 2% of world GDP. It accounts however for a much larger share of the world supply of energy and other commodities.”

BoJ board member Junko Nakagawa said “for the time being, inflationary pressure will remain strong, mainly for energy, food and industrial goods.” Core consumer prices may “briefly rise close to 2%.”

However, “even if that happens, what’s important is to scrutinise the factors and whether Japan’s economic fundamentals are strong enough to make such price rises sustainable,” she said.

China Caixin PMI Services dropped from 51.4 to 50.2 in February. PMI Composite was unchanged at 50.1.

“Under the “triple pressure” of demand contraction, supply shocks and weakening expectations, the economy’s recovery is still not robust. Stabilizing economic growth remains an important focus of the government.”

Australia AiG Performance of Construction rose from 45.9 to 53.4 in February. Building permits dropped -27.9% mom in January, versus expectation of -3.0% mom. Trade surplus widened to AUD 12.89B, above expectation of AUD 9.1B.

Later in the day, US will release jobless claims, ISM services and factory orders. 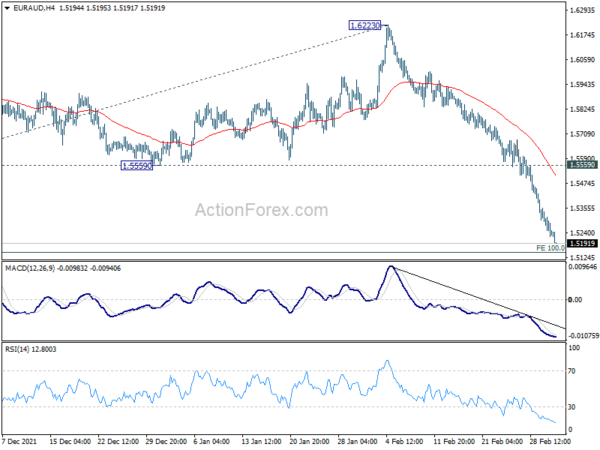 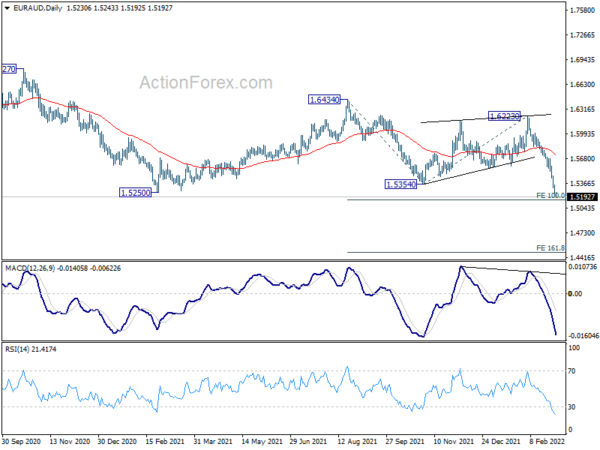