Yen and Dollar rise slightly in quiet Asia session today while Aussie and Kiwi weaken. It’s typical risk-off setting with weakness seen in oil price and gold too, but movements are limited. Major pairs and crosses are staying inside Friday’s range for now. Asia stock markets are also mixed with mild weakness seen in China and Hong Kong. There is little reaction to the much poorer than expected economic data from China.

Technically, main focus remains on whether EUR/USD would power through 2017 low at 1.0339. An interest point to note is that USD/CHF has already broke through parity already. A break of 1.0339 in EUR/USD could also quickly push it through parity too. Both Fed and ECB had already provided clear forward guidance on rates. The trigger for EUR/USD’s next move is more likely from intermarket reactions.

BNZ Senior Economist Doug Steel said that “for large parts of the service sector that have been through the ringer over recent times, we suspect any result above breakeven would be welcomed. But, on the other hand, April’s result also looks somewhat disappointing in the context of easing COVID restrictions (from Red to Orange) halfway through the month.”

The “increasingly grim and complex international environment and greater shock of [the] Covid-19 pandemic at home obviously exceeded expectation, new downward pressure on the economy continued to grow.” The NBS said in a statement. But it added, “with progress in Covid controls and policies to stabilize the economy taking effect, the economy is likely to recover gradually.”

Yuan’s decline has somewhat slowed a little last week. USD/CNH is now close to 61.8% retracement of 7.1961 to 6.3057 at 6.8560. Considering bearish divergence condition in 4 hour MACD, USD/CNH could be about to top for the near term. Break of 6.730 support will confirm the turn into a corrective phase in the uptrend. 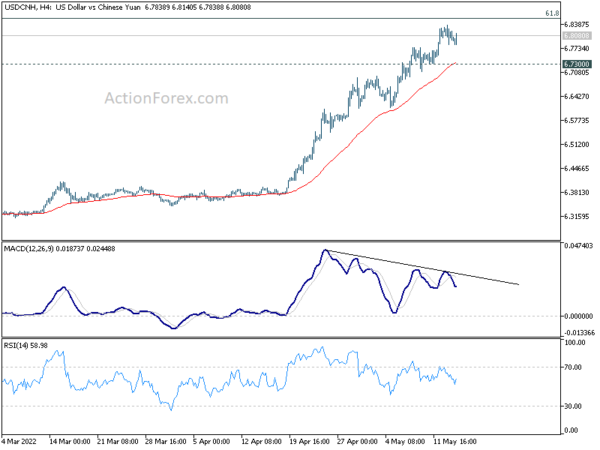 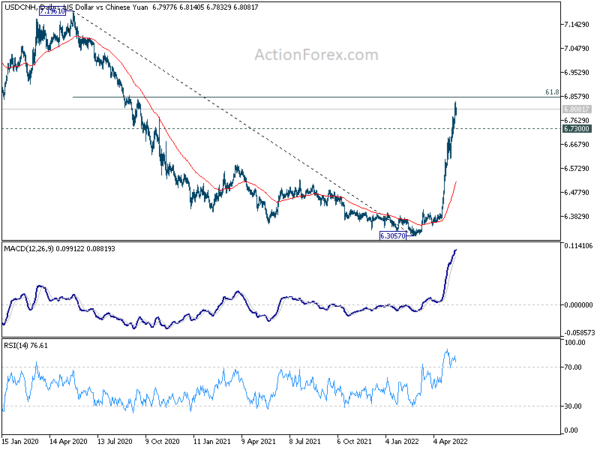 Both RBA and ECB will release meeting minutes this week. As for RBA, markets will look for more explanation on the larger than expected rate hike in May, and the hints on the size of the hike in June. As for ECB, policymakers are building up expectation for a July rate hike recently. The ECB minutes should provide some assurance to such expectations.

On the data front, main focuses will be about consumers in the major economies. Retail sales from US and UK will be featured. CPI from UK, Canada and Japan will also be released. Additionally, employment data will from UK and Australia will also be watched. Here are some highlights for the week:

AUD/USD is staying in consolidation above 0.6828 temporary low and intraday bias remains neutral. Outlook will remain bearish as long as 0.7265 resistance holds. Break of 0.6828 will resume larger fall from 0.8006, and target 0.6756/60 medium term fibonacci level next. 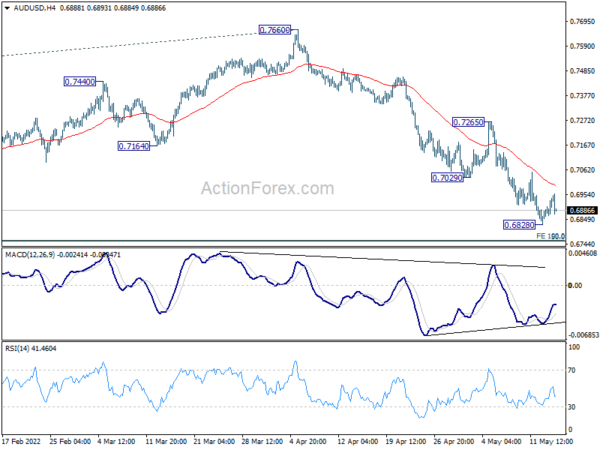 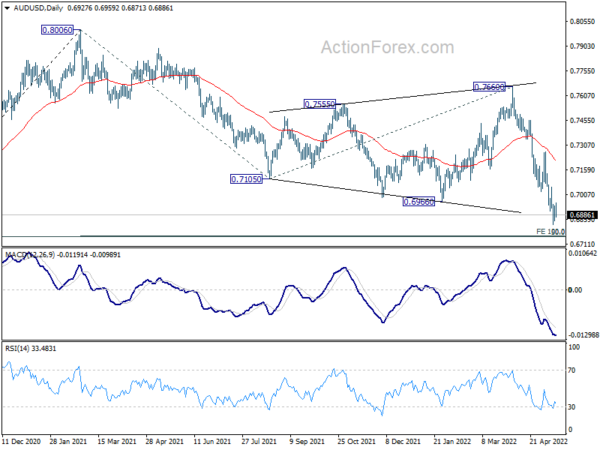