Overall markets are rather steady in Asian session today. Even the free falling crytocurrencies are stabilizing slightly. Major Asian indexes, except Nikkei, are treading water. Dollar and Yen are softening slightly with Sterling. Aussie and Euro and mildly higher. But most major pairs and crosses are just stuck inside Friday’s range. Sterling would be a focus this week with a string of economic data featured, including CPI, retail sales, and PMIs.

Technically, Bitcoin broke through 20k handle over the weekend and stays below. It could now be heading back to pre pandemic high at 13855. In any case, firm break above 25083 resistance turned support is needed to be the first sign of bottoming. But even so, upside potential should be limited below 32368 resistance. 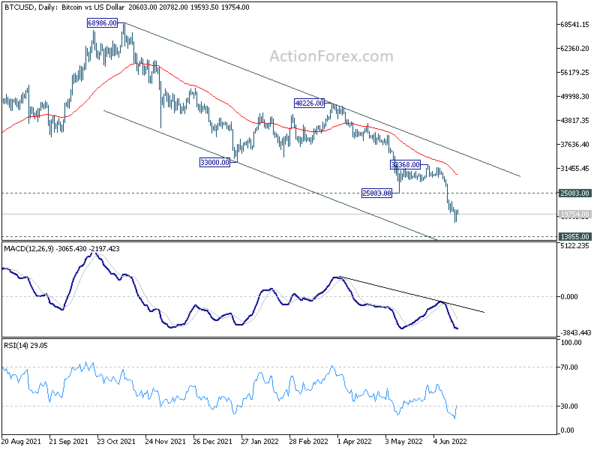 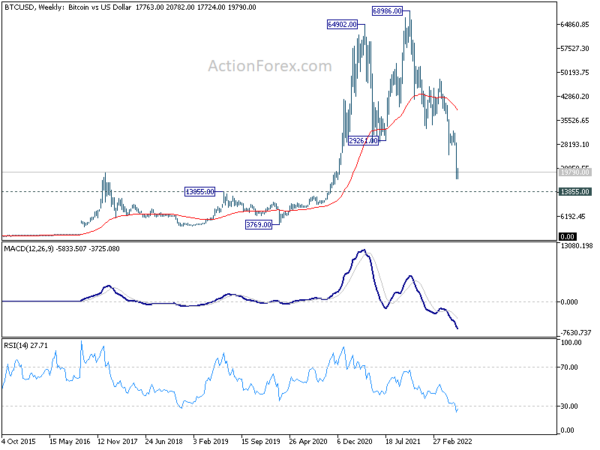 Fed Waller: Fed is all in on re-establishing price stability

Fed Governor Christopher Waller said in a speech over the weekend that “if the data comes in as I expect, I will support a similar-sized move at our July meeting,” referring to the 75bps hike at the June meeting. He added, “the Fed is ‘all in’ on re-establishing price stability.”

“It should not have been a surprise that the policy rate would rise fast in 2022. Rate hikes would need to be larger and more frequent, relative to the 2015-2018 tightening pace, to get back to neutral.”

10-yr JGB yield back below 0.21% after massive BoJ purchases

BoJ offered to purchase unlimited amounts of 5- and 10-year JGBs today. That’s part of the central bank’s move to cap 10-year yield at 0.25%, after doubling down on maintaining this position and the overall ultra loose policy stance last Friday. Just last week, BoJ bought JPY 10.9T yen of government bonds, the most on record according to data compiled by Bloomberg.

BoJ’s move seems to be working well finally with 10-year JGB yield now down below 0.21% handle, after breaking above 0.27% last week. 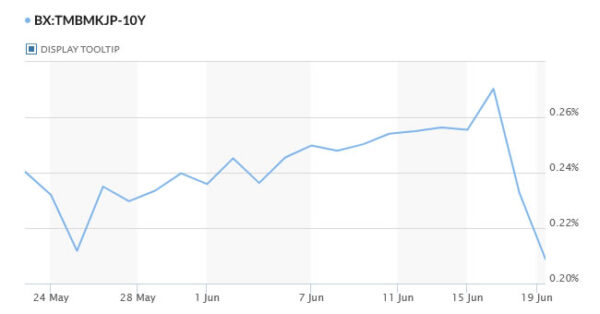 New Zealand BusinessNZ services rose to 55.2, back above average

BNZ Senior Economist Doug Steel said that “while the improvement was far from universal across components, reflecting many ongoing challenges across segments of the service sector, the overall outcome was the first above average result since the outbreak of Delta in August last year.”

UK data this week carry some weight, including CPI, consumer confidence and retail sales. For now, recession risks look higher than other major economies. The key lies in the dynamics between inflation and consumption. That’s the key to how far BoE’s tightening could continue. On the business side, PMIs will also be watched.

On central banks front, Fed Chair Jerome Powell will deliver his semi-annual testimony to Congress. No change in tune is expected, not that soon after last week’s FOMC press conference. RBA and BoJ will release meeting minutes while ECB will publish monthly economic bulletin.

Intraday bias in GBP/USD stays neutral as consolidations continues. But outlook stays bearish as long as 1.2666 resistance holds. On the downside, break of 1.1932 will resume larger down trend from 1.4248. However, firm break of 1.2666 will suggest medium term bottoming and bring stronger rebound back towards 1.3158 support turned resistance. 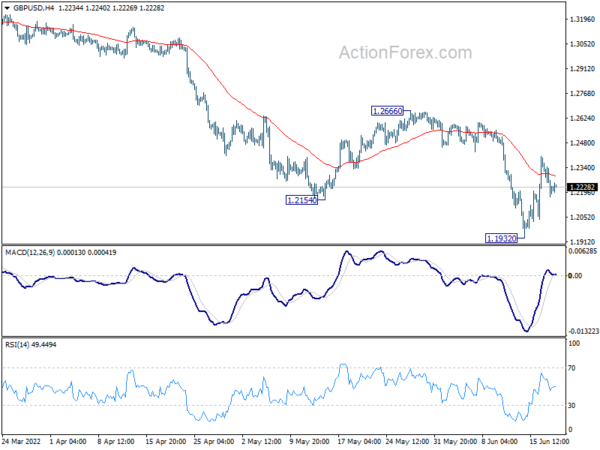 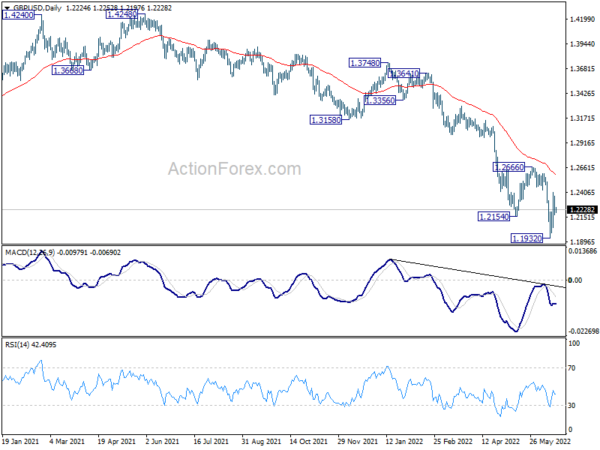