Euro Under Broad Based Pressure as Selling Spreads

Euro is under broad-based pressure today as selloff against Swiss Franc spreads to other pairs. Yen is currently the best performer following another round of pull back in Germany, and to a lesser extent US, benchmark yields. Aussie and Kiwi are also recovering while Dollar is firm. But for the week, Swiss Franc is still the winner followed by Dollar. Euro is the biggest loser so far, followed by Kiwi. 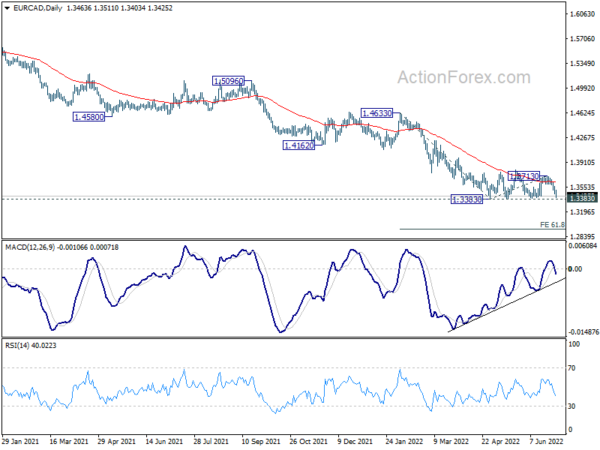 Canada GDP grew 0.3% mom in April, matched expectations. Both goods-producing (+0.9%) and services-producing (+0.1%) industries were up, as 13 of 20 industrial sectors expanded.

However, advanced information suggests that real GDP contracted -0.2% mom in May, with output down in mining, quarrying and oil and gas extraction, manufacturing and construction sectors.

Eurozone unemployment rate dropped to 6.6% in May, EU unchanged at 6.1%

Eurozone unemployment rate dropped from 6.7% to 6.6% in May, better than expectation of 6.8%. EU unemployment rate was unchanged at 6.1%. Eurostat estimates that 13.066m men and women in the EU, of whom 11.004m in the Eurozone , were unemployed in May

France consumer spending rose 0.7% mom in May, slightly above expectation of 0.6% mom. That’s the first increase after five months of contraction. The increase was almost exclusively due to the clear rebound in consumption of manufactured goods (+2.7% after -1.3% in April). Food consumption was stable (+0.1% after -1.2%) while energy consumption decreased significantly (-2.6% after +1.9%).

Swiss KOF Economic Barometer dropped from 97.7 to 96.9 in June, slightly above expectation of 96.8. It’s now below long-term average for the second month in a row. KOF said, “the outlook for the Swiss economy in the upcoming months therefore remains subdued.”

KOF added: “The downward movement of the barometer is primarily driven by bundles of indicators for foreign demand and manufacturing. Only indicators for the financial and insurance services sector and for the construction sector are at a nearly constant level. However, indicator bundles for private consumption show a slight positive trend.”

Japan industrial production dropped -7.2% mom in May, much worse than expectation of -0.3% mom. That was also the worst contraction in two years, since the -10.5% mom decline in May 2020.

Nevertheless, manufacturers surveyed by the Ministry of Economy, Trade and Industry (METI) expected output to rebound 12.0% in June, followed by a 2.5% expansion in July.

“Even though the manufacturing sector continued to recover this month, 49.3 percent of the companies reported orders were insufficient,” said Zhu Hong, senior statistician at NBS. “Soft market demand is still the main problem facing the manufacturing industry.”

ANZ said: ” For now, supply-side issues remain firms’ biggest problems: finding skilled labour, costs, and wages being the top three. The RBNZ needs those problems to ease, and weakening demand to move up the charts. That’s what’s required to bring inflation pressure down.

“Of course, weaker demand might ease the overtime, but it’s unlikely to enhance profitability. That moment of happy equilibrium between demand and supply may prove fleeting, with the RBNZ entirely willing to incur the risk of a hard landing to ensure the long-term structural health of the economy in terms of well-anchored inflation expectations.”

EUR/USD is still staying above 1.0339/58 support zone with today’s decline. Intraday bias stays neutral first. Further fall is in favor with 1.0614 minor resistance intact. On the downside, sustained break of 1.0339/48 will resume larger down trend. Next target is long term projection level at 1.0090. On the upside, above 1.0614 will turn bias back to the upside for 1.0786 resistance instead. 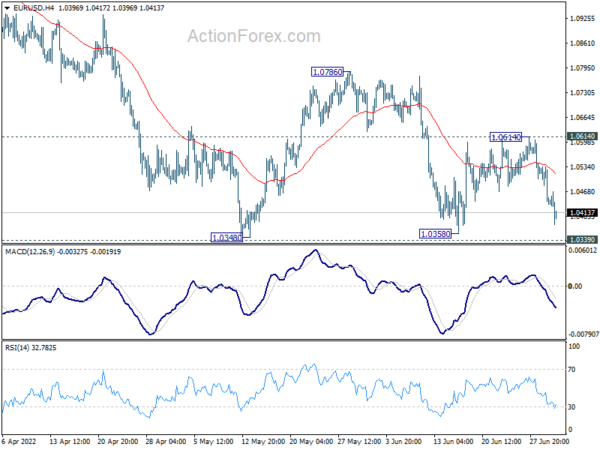 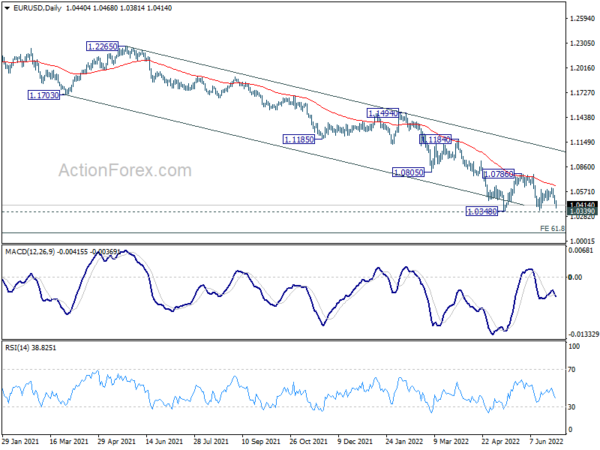