Overall, the development in the financial markets are rather mixed for now, still awaiting further development in Taiwan Strait tensions. Yen’s rally was somewhat choked by the recovery in US benchmark yields overnight. Dollar is attempting a rebound, but momentum doesn’t warrant a reversal yet. Sterling is the relatively stronger European major, but the break out against Euro looks half-hearted. Investors might continue to hold their bets until US House Speaker Nancy Pelosi leaves Taiwan.

Technically, Gold was rejected by 1786.65 support turned resistance on first attempt, but it’s resiliently holding on for now. Further rise will remain in favor as long as 1739.10 support holds. Sustained break of 1786.65 and 55 day EMA will affirm the case and bullish reversal, and target 1878.92 resistance and above next. If happens, Gold’s next rally could come with another rebound of selloff in the greenback. 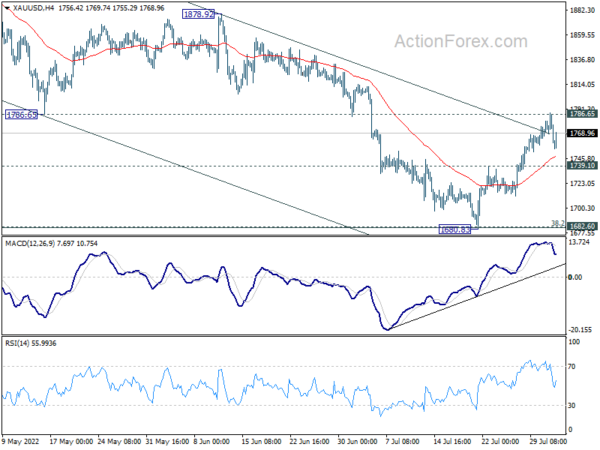 Fed Mester: We’re not in a recession, have more work to do on inflation

Cleveland Fed President Loretta Mester said in a Washington Post interview yesterday, “I don’t believe we’re in a recession… We don’t have a slowdown in labor markets, and that’s two key factors that go into calling a recession.”

“Our policy has been to raise interest rates in order to cool down the demand side of the economy…. but certainly it hasn’t slowed enough, (a), to call it a recession; and (b), to even see that moderation in demand showing through yet to a moderation and a cooling-off of price increases and inflation,” she added.

“We have more work to do because we have not seen that turn in inflation. It’s got to be a sustained several months of evidence that inflation has first peaked – we haven’t even seen that yet – and that it’s moving down,” she also noted.

Fed Bullard: Rates need to go a bit higher than I said before

St. Louis Fed President James Bullard said yesterday that inflation has “come in hotter” than he expected during Q2. Thus, “I think we’re going to have to go a little bit higher than what I said before.” He added that the federal funds rate will have to go to 3.75-4.00% by the end of the year, comparing to the current 2.25-2.50%.

“Since modern central banks have more credibility than their counterparts in the 1970s, it appears that both the Fed and the ECB may be able to disinflate in an orderly manner and achieve a relatively soft landing,” Bullard also noted.

Fed Daly: Need to keep committed until actually seeing inflation down in data

San Francisco Fed President Mary Daly said Fed is “nowhere near almost done”, with inflation. “We have made a good start and I feel really pleased with where we’ve gotten to at this point.”

“It really would be premature to unwind all of that and say the job is done,” she said. “I also think that we’ve been with this high inflation for a while, and really getting too confident that we’ve already solved the problem,” Daly said, adding that the Fed needs to “keep committed until we actually see it in the data.”

Chicago Fed President Charles Evan said that is things “weren’t improving”, the 50bps rate hike in September is a “reasonable assessment”, but 75 bps “could also be ok”. He added “I doubt that more would be called for.”

“We wanted to get to neutral expeditiously. We want to get a little restrictive expeditiously,” Evans added. “We want to see if the real side effects are going to start coming back in line … or if we have a lot more ahead of us.”

HIA Economist, Thomas Devitt, said: “Confidence in the housing sector has been adversely impacted by rising rates which will compound the rise in the cost of construction. This has not yet materialised in slowing sales or approvals of new homes and there is still a large volume of building work in the pipeline to complete. Recent declines in confidence, as shown in this month’s Australian PCI, reflect an anticipation on the part of builders of less new work entering the pipeline in coming months as the RBA’s current tightening cycle will, inevitably, bring an end to the boom.”

New Zealand employment was essentially flat in Q2, below expectation of 0.4% rise. Unemployment rate ticked up from 3.2% to 3.3%, against expectation a fall to 3.1%. Labor force participation rate dropped -0.1% to 70.8%.

“The June quarter had the largest increase in LCI salary and wages rates since late-2008. Over the year, a steadily increasing number of wages have been raised to better match market rates, as well as attracting or retaining staff,” business employment insights manager Sue Chapman said.

Wang Zhe, Senior Economist at Caixin Insight Group said: “In general, the eased Covid situation and restrictions facilitated a continuous recovery in the economy. The services sector, which had been previously hit harder by the outbreaks than manufacturing, showed stronger improvement. Supply and demand continued to improve with supply stronger than demand. The labor market shrank greatly, adding to employment pressures. Business costs steadily climbed while prices charged remained stable, posing challenges for company profits. The market held on to positive sentiment, even with concerns about the outlook for Covid and the economy.”

Intraday bias in GBP/USD remains neutral for consolidation below 1.2292 temporary top. Further rally is expected as long as 1.2062 minor support holds. Above 1.2292 will target 1.2405 resistance first. Firm break there will target 1.2666 key resistance next. On the downside, however, break of 1.2062 minor support will argue that the rebound is over, and turn bias back to the downside for retesting 1.1759 low instead. 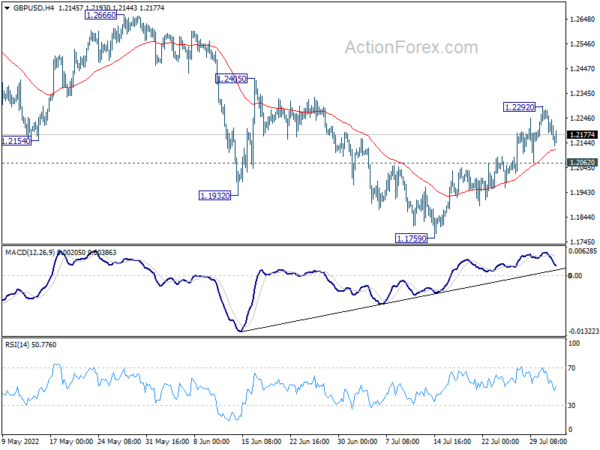 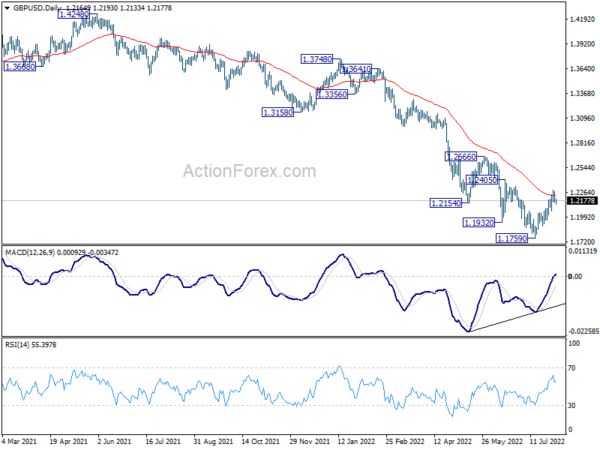