Yen Stays Weak in Quiet Markets, US CPI to Move the Markets This Week

Yen stays generally soft in relatively quiet markets in Asia. But Dollar also softens slightly. On the other hand, Australian Dollar is firmer up on steady market sentiment, as followed by Swiss Franc and Euro. Sterling and Canadian are mixed for now. The economic calendar is light this week. The most market moving even would be on US CPI release on Wednesday, unless there is significant geopolitical developments.

Technically, AUD/JPY is resuming near term rebound from 990.51 by breaching last week’s high at 93.79. Corrective pattern from 96.86 high could have completed with three waves down to 90.51. Further rise is now in favor as long as 92.22 minor support holds, towards 95.68 resistance next. Break there will argue that larger up trend is ready to resume through 96.86 high. Such development will be monitor to verify the strength of underlying risk-on sentiment, if stock market rallies continue this week. 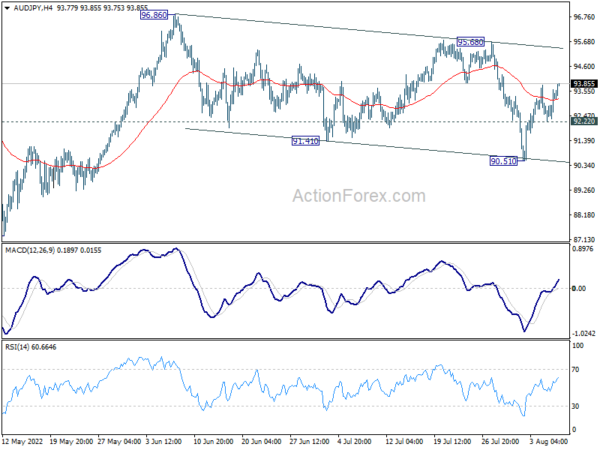 Fed Governor Michelle Bowman sad in a speech over the weekend, she supported Fed’s 75bps rate hike in July, as well as the view that “ongoing increases” would be appropriate at “coming meetings”.

“My view is that similarly-sized increases should be on the table until we see inflation declining in a consistent, meaningful, and lasting way,” she added.

Bowman saw a “significant risk of higher inflation into next year for food, housing, fuel, and vehicles.” And, the supply problems seem “likely to persist”. But job market was tight with unemployment rate finally returning to the pre-pandemic level of 3.5%. Her base case is for a pickup in growth during H2, and for moderate growth in 2023.

Fed Daly: most important risk out there is inflation

San Francisco Fed President Mary Daly said in a CBS New interview, “if you’re out in the economy, you don’t feel like you’re in a recession. That’s the bottom line. The most important risk out there is inflation. And I think the job market just confirms that.”

She added that a 50bps hike in September is still “absolutely” appropriate. “And we need to be data dependent. It could. We need to leave our minds open. We have two more inflation reports coming out, another jobs report. We continue to collect all the information from the context we talk to you to see how this is working its way through the economy,” She said.

Still, the most watched 2 year expectation sit above RBNZ’s target range. There is no change in market expectation that RBNZ would deliver another 50bps rate hike on August 17.

US CPI back in spotlight in a light week

US CPI will come back to spotlight in a relatively light week. It’s expected to slow from four-decade high at 9.1% yoy to 8.7% yoy. There are altogether two set of CPI data before Fed next meets on September 21. By then, Fed should know whether CPI is still climbing, plateauing, or has peaked.

US U of Michigan consumer sentiment will also be watched. elsewhere, Eurozone Sentix investor confidence, UK GDP, and Eurozone production will also catch some attention.

Intraday bias in USD/CHF remains neutral for the moment. On the upside, break of 0.9650, and sustained trading above 55 day EMA (now at 0.9647) will raise the chance that corrective pattern from 1.0063 has completed. Further rally should then be seen to 0.9884 resistance next. However, decisive break of 0.9471 support will carry larger bearish implication. 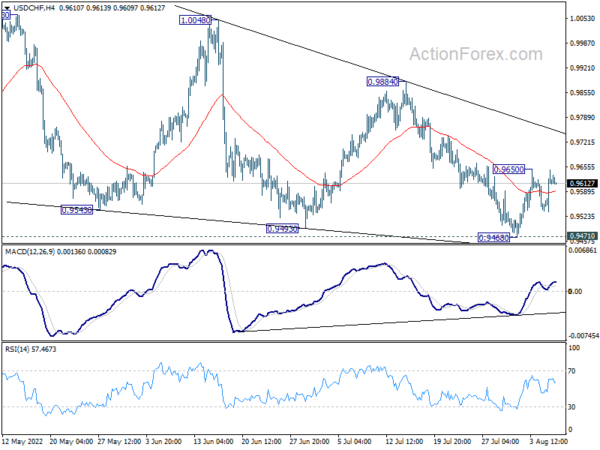 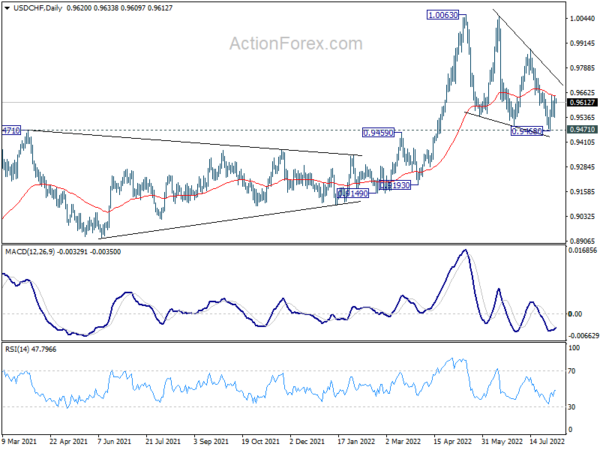