Euro rises slightly as market sentiments are flip-flopping today. Sterling and Swiss Franc are also trading higher. On the other hand, commodity currencies turn soft with Aussie paring most of recent gains. Dollar and Yen are mixed for now. IN other markets, Silver is trading firmer but Gold is still range bound. WTI crude oil is recovering while cryto-currencies turn south. Stocks are mixed with US futures pointing to a flat open.

Technically, the condition is there for WTI crude oil to stage a sustainable rebound considering bullish convergence condition in 4 hour MACD. Yet, it will have to overcome 4 hour 55 EMA (now at 93.81) first. Then ideally, there should be some up side acceleration through 98.04 resistance. Otherwise, chances are for another dip through 88.20 low before WTI forms a solid bottom. 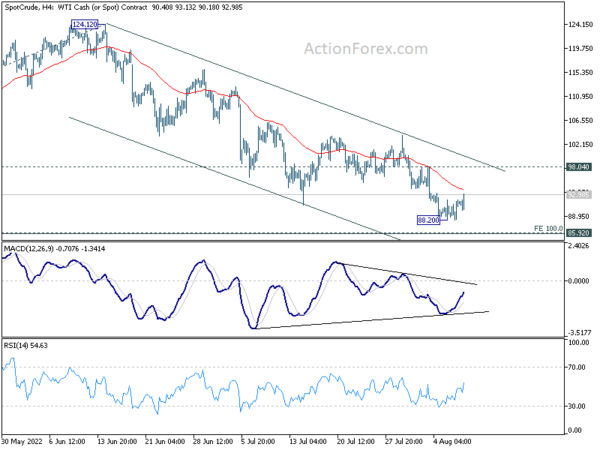 BoE Deputy Governor Dave Ramsden said in a Reuters interview, “for me personally, it’s more likely than not that we will have to raise Bank Rate further.

“But I haven’t reached a firm decision on that,” he added. “I’m going to look at the indicators, look at the evidence as we approach each upcoming meeting.”

“I’m certainly not ruling out a situation where when we look at the risk to the economy, having been raising Bank Rate, at some point we then have to start lowering it quite quickly,” he said. “I can imagine situations, yes, where we’ll carry on… with a pace of QT in the background.”

Australia Westpac Consumer Sentiment Index fell -3% to 81.2 in August. The reading was on par with the lows of the Covid and Global Financial Crisis. Also, there was a cumulative decrease of -22.9% from recent peak made in November 2021.

Regarding RBA’s next meeting on September 6, Westpac expects the central bank to hike by another 50bps to 2.35%, leaving the cash rate in “neutral range”. It expects RBA to then scale back the increase to 25bps per meeting until February 2023.

“Businesses are continuing to report that conditions are really strong,” said NAB Group Chief Economist Alan Oster. “While some of the real time data we look at is showing signs of softening, there are no signs of that in the survey with demand at a really high level. Importantly, the strength is showing up across the board in terms of industries and across the country.”

“Confidence bounced back in July, which was something of a surprise,” said Oster. “Inflation and rising interest rates are clouding the outlook, and there are growing concerns about the global economy, but businesses seem to have a fairly positive outlook at the moment. Forward orders are also fairly strong at +10 index points which also supports the outlook.”

EUR/USD recovers mildly today but stays in established range. Intraday bias remains neutral first. On the downside, break of 1.0095 minor support will argue that larger down trend is ready to resume. Intraday bias will be back to the downside for retesting 0.9951 low first. For now, outlook will stay bearish as long as 1.0348 support turned resistance holds, even in case of another rise. 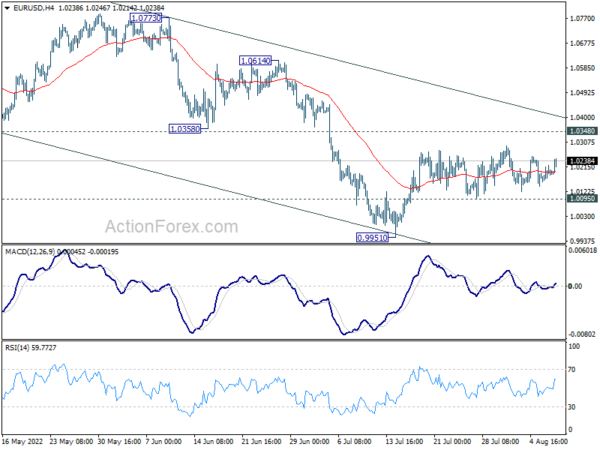 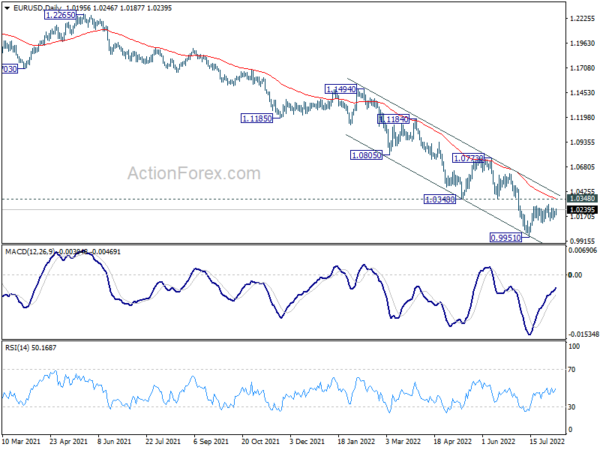