Japan appeared to have intervene in the currency markets again today. But USD/JPY is holding its head up, staying resilient around 32-year high. Both Dollar and Yen are among the worst as the financial markets are basically trading with solid risk-on sentiment. New Zealand and Australian Dollar ride on such sentiment and are the strongest ones so far. European majors are mixed, with Sterling on a slightly softer side.

Technically, USD/JPY’s dip today isn’t half as fierce as it was back in late September when Japan intervened. But in any case, there is no signal of reversal as long as 146.43 support holds. USD/JPY might struggle again on another attempt towards 150. Hence, favor is now on having other Yen crosses, in particular EUR/JPY and GBP/JPY, to rise higher. 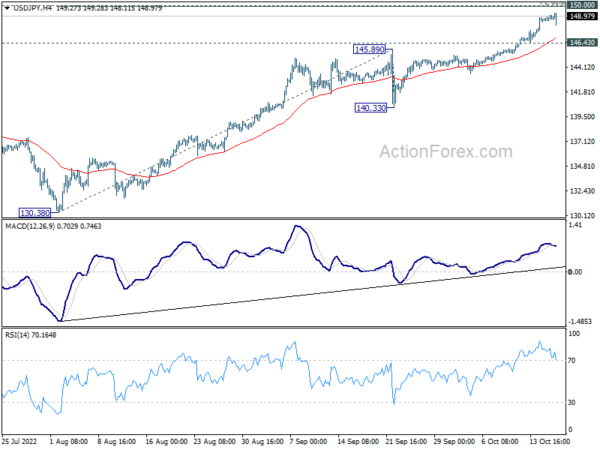 “The ZEW Indicator of Economic Sentiment rises slightly in October. However, the current economic situation is once again assessed as significantly worse than in the previous month. The probability that real gross domestic product will decline in the course of the next six months has also increased considerably. Overall, the economic outlook has deteriorated again,” said ZEW President Professor Achim Wambach on current expectations.

Minutes of RBA October 4 meeting revealed that members “carefully considered two options” of 50bps and 25bps rate hike. The arguments for a 25bps hike “rested on the risks to global and domestic growth, and the potential for inflation to subside quickly”.

Wages growth had “not reached levels that would be inconsistent with the inflation target”. External inflation pressures “might ease quickly given that the global outlook had deteriorated”. There was also an argument to slow for a time to “assess the effects of the significant increases in interest rates to date”.

RBA said the arguments for both options were “finely balanced”, with the case of 25bps hike stronger. “A smaller increase than that agreed at preceding meetings was warranted given that the cash rate had been increased substantially in a short period of time and the full effect of that increase lay ahead.”

RBA Bullock: We meet more frequently than most of our peers

RBA Deputy Governor Michele Bullock acknowledged in a speech that some commentators contracted the 24bps hike in October with those of other central banks that have been hiking by larger increments.

“In part, this reflects our particular economic circumstances,” she said. “But it is also relevant that the Board meets more frequently than most of our peer central banks.”

RBA is “making monetary policy decisions 11 times a year so it is discussing regularly the evidence on the economy and has more flexibility on the size and timing of rate increases… The incremental change in the policy rate at recent meetings has been smaller than some other major central banks. However, our policy rate trajectory has been as steep, or steeper, than other central banks”.

The quarterly rise in prices was mainly influenced by the food group and the housing and household utilities group. Vegetable prices rose 24% during the quarter, largest since the the series began in 1999.

The main driver for annual inflation was housing and household utilities due to rising prices for construction, rentals for housing, and local authority rates.

Suzuki later told the parliament that the government is ready to take actions “decisively” and “we have intervened in the currency markets (last month)”.

“Generally speaking, there are times when we intervene by making announcements and some other times when we do without it,” Suzuki said.

USD/CHF is still holding above 0.9914 minor support and intraday bias remains neutral. On the upside, break of 1.0072, and sustained trading above 1.0063, will confirm larger up trend resumption. Next target is 1.0283 projection level. However, break of 0.9914 support will indicate rejection by 1.0063, and turn bias back to the downside for 0.9779 support first. 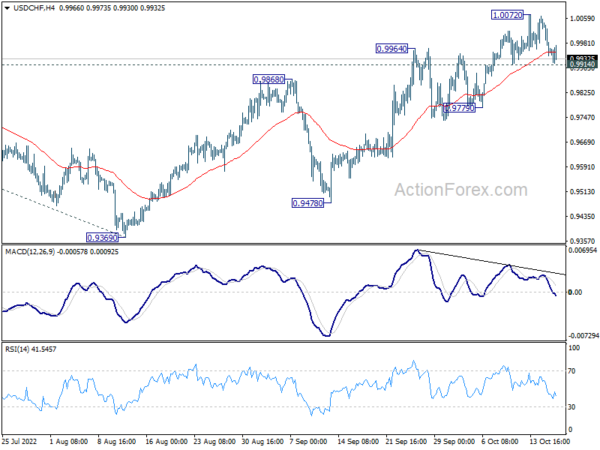 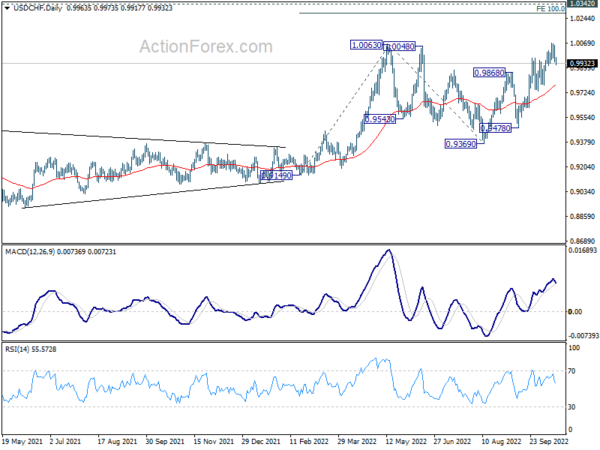