Overall market sentiment is mixed today. European stocks are trading up together with US futures. But heavy selling was seen in Hong Kong and China stocks earlier. Commodity currencies appear to be weighed down by the negative side of the picture, while Dollar is firmer with European majors. Sterling is so far the better performer but there is no follow through buying. The Pound is awaiting news on whether Rishi Sunak will become the next UK Prime Minister. There is little reaction to the poor PMI data from Eurozone and the UK. Yen is mixed for now, slightly on the soft side. 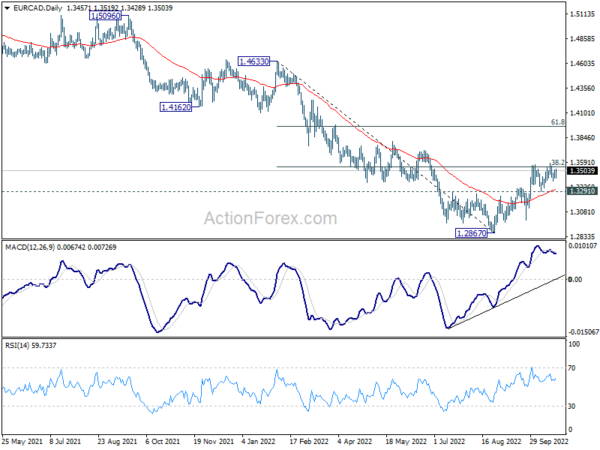 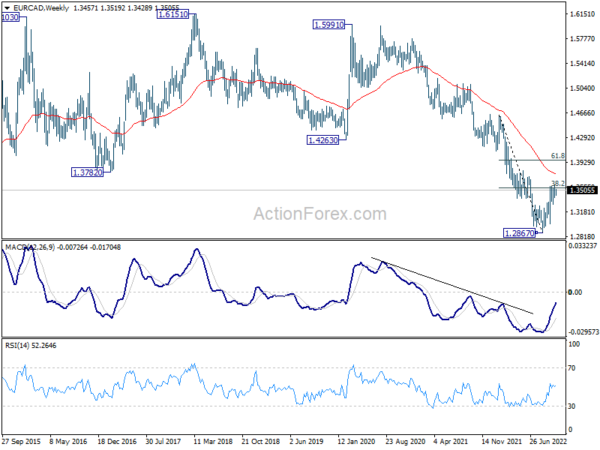 “The resulting elevated, albeit easing, price pressures look set to drive the Bank of England into further aggressive interest rate hikes. On top of the collapse in political stability, financial market stress and slump in confidence, these higher borrowing costs will add to speculation of a worryingly deep UK recession.”

Eurozone PMI composite dropped to 47.1, economy to contract in Q4, risks on downside

Chris Williamson, Chief Business Economist at S&P Global Market Intelligence said: “The eurozone economy looks set to contract in the fourth quarter given the steepening loss of output and deteriorating demand picture seen in October, adding to speculation that a recession is looking increasingly inevitable.

“While October’s headline flash PMI is consistent with GDP falling at a modest rate of around 0.2%, demand is falling sharply and companies are increasingly growing worried over high inventories and weaker than expected sales, especially as winter approaches. The risks are therefore tilted towards the downturn accelerating towards the year-end.”

Japan Finance Minister Shunichi Suzuki declined to confirm if there was intervention in the currency markets last Friday. But he reiterated, “we cannot tolerate excessive volatility caused by speculative moves, and we are ready to take necessary steps when needed…. we are in a situation where we are confronting speculative moves strictly.”

Masato Kanda, Vice Finance Minister for International Affairs also said, “we won’t comment” on whether Japan will intervene gain. He said, “we will take appropriate steps against excessive volatility 24 hours a day, 365 days a year.”

Laura Denman, Economist at S&P Global Market Intelligence, said: “Latest flash PMI data has pointed to a further improvement in Japan’s private sector economy in October… The manufacturing sector, however, continued to struggle in the face of weak demand conditions and severe cost pressures… With inflationary pressures remaining elevated across the private sector, business confidence dipped to a six-month low.”

RBA Kent: Depreciation in AUD will have very modest uplift in prices

RBA Assistant Governor Christopher Kent said in a speech, “The Board expects to increase interest rates further in the period ahead, given the need to establish a more sustainable balance of demand and supply and in the face of a very tight labour market.” The “size and timing” of rate increases will depend on “incoming data” and “outlook for inflation and the labour market.”

Kent also said the appreciation of the US dollar will “add to the cost of imports for a time” because much the global trade is invoices in it. At the same time, rise in US interest rates will also “contribute to a decline in global inflation pressures”. The depreciation of Australia’s nominal trade-weighted exchange rate over the year to date will contribute only a “very modest uplift in the level of consumer prices over the period ahead”.

After a delay amid the 20th Communist Party Congress last week, China released a batch of economic data today.

Range trading continues in EUR/USD and intraday bias stays neutral at this point. On the downside, break of 0.9630 bring retest of 0.9534 first. Firm break there will resume larger down trend. However, break of 0.9998 resistance will resume the rise from 0.9534, and carry larger bullish implications. 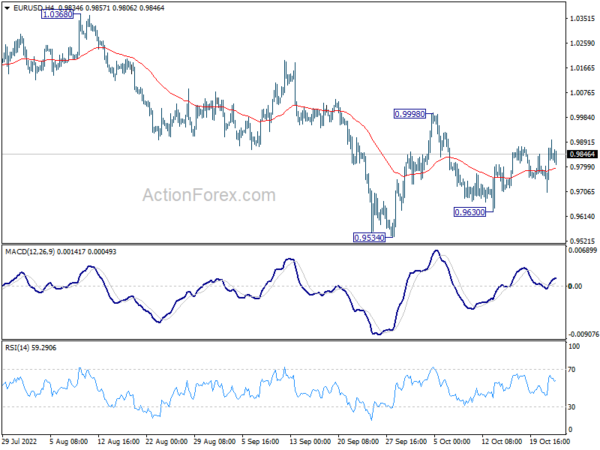 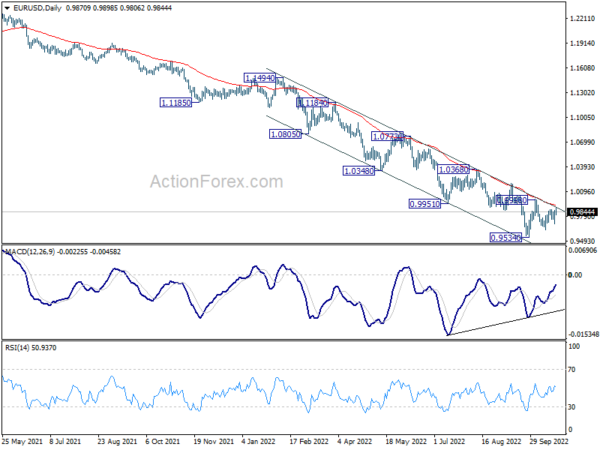