Euro Rises as Investor Sentiment Improves, Dollar and Yen Down

Euro rises broadly today as supported by improvement in investor sentiment, but Sterling and Swiss Franc are lagging behind. Canadian Dollar also follows oil price high, as China appears to be moving further towards reopening. Australian Dollar is also firm. But Yen and Dollar are on the weaker side on positive market sentiment.

Technically, while Euro does strengthen, the momentum is not too convincing yet. For now, EUR/CHF’s rise from 0.9720 still looks more like a corrective move, as the second leg of the pattern from 0.9953. The cross will need to take out 0.9953 resistance decisively to confirm the underlying bullishness in Euro.

ECB Makhlouf: Premature to be talking about end-point for policy rates

ECB Governing Council member Gabriel Makhlouf said, “To continue on our path to bring inflation back to our 2% target, I see a 50 basis-point increase in interest rates as the minimum needed at our December meeting.”

“We have to be open to policy rates moving into restrictive territory for a period,” the Irish central-bank chief said. “It is premature to be talking about the end-point for policy rates amid the prevailing levels of uncertainty.”

“The justification for the expansion of the balance sheet – too low inflation and the risk of deflation – has ended, and it is time to look at reducing its size,” he said.

Sentix said: “The latest sentix economic data improve again and surprisingly significantly. Investors are spreading hope that thanks to mild winter weather, sufficient gas in storage and a possible peak in inflation data, the economic downturn has also passed its zenith.

“Internationally, there are also more moderate tones from the US Federal Reserve, which is holding out the prospect of “only” 50 basis points of interest rate increases in December. And in China, the protests finally seem to point to an end to the restrictive Corona measures.

“So will the recession end before it has really begun?”

Chris Williamson, Chief Business Economist at S&P Global Market Intelligence said: “A fifth consecutive monthly falling output signalled by the PMI adds to the likelihood that the eurozone is sliding into recession. However, at present the downturn remains only modest, with an easing in the overall rate of contraction in November means so far the region looks set to see GDP contract by a mere 0.2%.”

Eurozone retail sales volume dropped -1.8% mom in October, worse than expectation of -1.6% mom. The volume of retail trade decreased by -2.1% for non-food products and by -1.5% for food, drinks and tobacco, while it grew by 0.3% for automotive fuels.

Chris Williamson, Chief Business Economist at S&P Global Market Intelligence: “A further economic contraction signalled by the PMI surveys hints at a growing recession risk for the UK. A change of government and its new economic policies may have helped arrested some of the financial market volatility after September’s ‘mini-budget’ but the economic picture remains stubbornly unchanged. ”

The overall rate of economic contraction has held steady compared to October, indicative of GDP falling at a quarterly rate of 0.4%. As such, this is the toughest spell the UK economy has faced since the global financial crisis excluding only the height of the pandemic.

China Caixin PMI Services dropped from 48.4 to 46.7 in November, below expectation of 48.8. PMI Composite dropped from 48.3 to 47.0, signalling a third successive monthly contraction in business activity. The rate of decline was the strongest since May.

Wang Zhe, Senior Economist at Caixin Insight Group said: “Manufacturing and services activity contracted in varying degrees, with the services sector hit harder by Covid outbreaks…. The prolonged pandemic has battered the economy. While the third wave has led to a softened slowdown on both supply and demand than the previous ones, there has been significant pain in the job market.”

Intraday bias in EUR/USD stays on the upside for the moment with focus on 1.0609 fibonacci level. Sustained break there will carry larger bullish implication and target next level at 1.1273. However, break of 1.0427 minor support will indicate rejection by 1.1273, and turn bias back to the downside for 1.0222 support and possibly below. 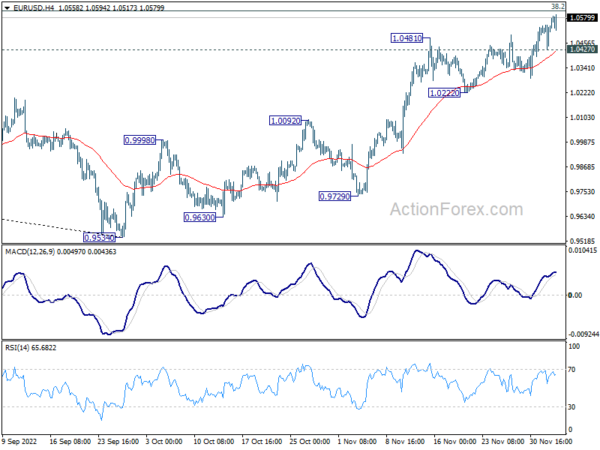 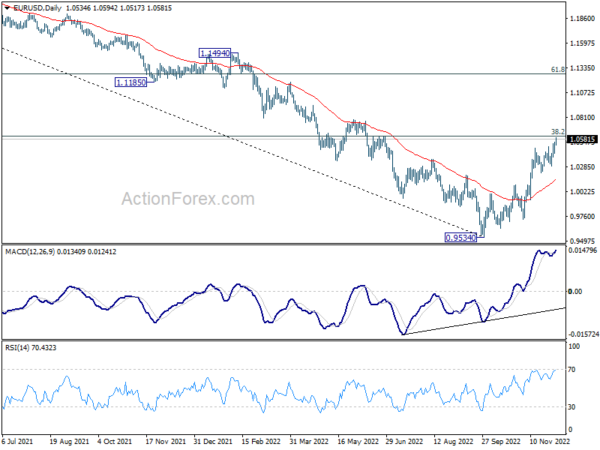