Action Forex
Home Action Insight Market Overview US Treasury Mnuchin in Trade Talk with China, But No One is...

US Treasury Mnuchin in Trade Talk with China, But No One is Cheering Yet

The financial markets opened the week rather quietly. Nikkei and KOSPI opened lower and turned black as the session went on. But other major Asian indices stayed slightly in red. US is apparent in talk with China on trade agreement. But no one in the markets is cheering for it at this stage. In the currency markets, commodity currencies are generally higher. New Zealand dollar is leading the way on solid trade performance in February. Yen is paring its recent gains broadly as risk aversion is not intensifying. Markets could turn more quiet in a holiday shortened week.

The financial markets opened the week rather quietly. Nikkei and KOSPI opened lower and turned black as the session went on. But other major Asian indices stayed slightly in red. US is apparent in talk with China on trade agreement. But no one in the markets is cheering for it at this stage. In the currency markets, commodity currencies are generally higher. New Zealand dollar is leading the way on solid trade performance in February. Yen is paring its recent gains broadly as risk aversion is not intensifying. Markets could turn more quiet in a holiday shortened week.

US Treasury Secretary Steven Mnuchin said in a Fox News Sunday interview that the US is having “very productive conversations” with China. And he’s “cautiously hopeful we can reach an agreement” to avert the tariffs on USD 50-60b announced last week. Mnuchin noted that both countries agreed on reducing the US trade deficit to China. And, they were trying “to see if we can reach an agreement as to what fair trade is for them to open up their markets, reduce their tariffs, stop forced technology transfer.”

But Mnuchin emphasized that the US is still on track to impose the Section 301 tariffs unless there is an “acceptable agreement” for Trump to sign off on. He also noted that “we’re not afraid of a trade war, but that’s not our objective.” And, “in a negotiation you have to be prepared to take action.”

Separately, the WSJ reported that Mnuchin and US Trade Representative Robert Lighthizer sent a letter to Chinese Vice Premier Liu He last week, detailing the list of specific request for China. And the list is reported to include reduction of Chinese tariffs on US vehicles, purchases of semiconductor products and larger access to China’s financial markets.

The South Korea’s Ministry of Trade said today that is’ exempted from the US steel and aluminum tariffs. However, South Korea now received a quota of around 2.68m tonnes of steel exports. And that is 70% of the annual average of Korean steel exports to the US between 2015-2017. South Korean contributed to 9.7% of US steel imports in 2017. In the mean time, Both countries also agreed on 20-year extension of Korean pickup trucks, until 2041. US automakers could also bring in 50000 vehicles to South Korean annually, doubling from prior amount of 25000.

That is the first of many US allies to receive an indefinite exemption on the steel and aluminum tariffs. Other six, Argentina, Australia, Brazil, Canada, Mexico and EU are just having the tariffs temporarily suspended. At this point, there is no news regarding the exemption on Japan and Taiwan, two other major US allies in Asia, yet.

RBNZ jointly announced the policy target agreements with Ministry of Finance today. Employment is now formally added to its mandate. The statement retained price stability as a target. RBNZ should target to keep annual CPI inflation between 1-3% over medium term. And focus is to keep inflation near to the 2% mid-point. Additionally, the with stable general price level maintained, the monetary would “contribute to supporting maximum sustainable employment within the economy.” Overall, the announce is widely expected as a result of the new government’s RBNZ review. And, there wouldn’t be any change to the neutral to slightly dovish bias of RBNZ as Adrian Orr just take over as the governor.

NZD trades generally higher in Asian session after trade balance data. Accord to Stats NZ Tatauranga Aotearoa, for February 2018 compared with February 2017, goods exports rose NZD 446 million or 11% yoy to NZD 4.5 billion. Goods imports rose NZD 187 million or 4.6% to NZD 4.2 billion. Import was a new high a new high for total imports in a February month. The previous high was NZD 4.1 billion, in February 2017. The monthly trade balance was a surplus of NZD 217 million. That equals to 4.9% of exports.

The economic calendar ahead is not too busy, in a holiday shortened week. There are some economic data that could be market moving. And they include US personal income and spending, consumer confidence and Canada GDP. But traders will probably look through to next week for the more important data like non-farm payrolls and ISM indices instead.

AUD/USD continues to stay in consolidation above 0.7671 temporary low and intraday bias remains neutral. Near term outlook stays bearish with 0.7915 resistance intact and fall from 0.8135 is expected to extend. Break of 0.7671 will turn bias to the downside for 0.7500 key support level next. However, break of 0.7915 resistance will indicate near term reversal and turn focus back to 0.8135 high instead. 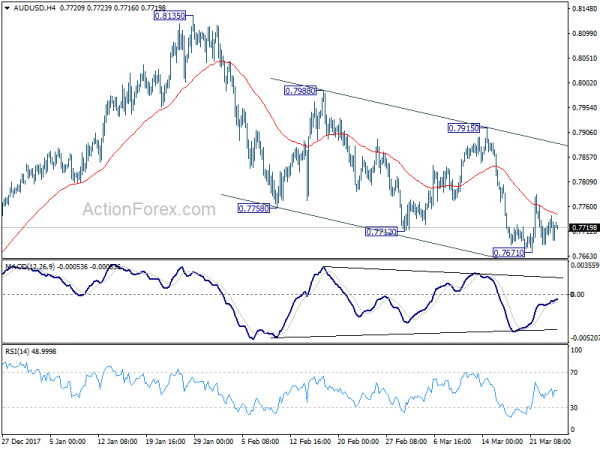 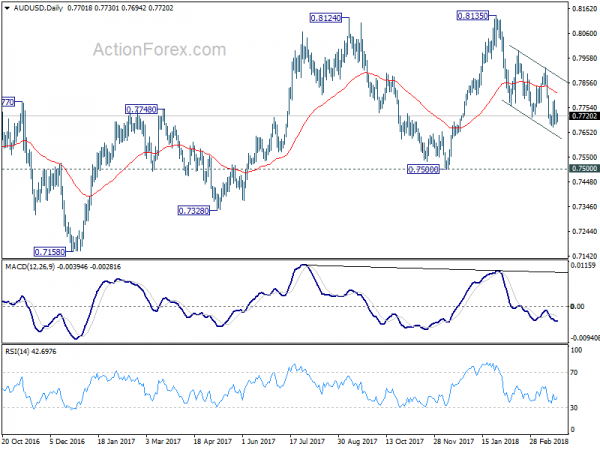