Risk sentiments stabilized as markets reacted positively to the possibility of a trade deal between US and China. Major European indices are trading higher even though gains are only at 0.35-0.55% in FTSE, CAC and DAX only, at the time of writing. US futures also point to triple digit gains in DOW at open. In the currency markets, Yen trades broadly lower, paring much of last week’s gain as sentiments stabilized. For the momentum New Zealand Dollar is trading as the strongest one for today so far. But Sterling and Euro and catching up entering into US session.

Technically, GBP/USD’s rally from 1.3711 extends today and is on course to test 1.4345 near term resistance. Break will resume medium term up trend. EUR/USD’s rise also affirms that case that rebound from 1.2154 is in progress. We’re now waiting for 1.2445 resistance to break to confirm. Also, while Yen is trading broadly lower, the retreat against Dollar is shallow. USD/JPY is staying in very tight range above 104.63. There is not sign of short term bottoming in USD/JPY yet.

Moody’s, the credit rating agency, acknowledge the positive impact of the Brexit transition deal announced last week. However, it remained cautious that risks will prevail until a final agreement is made. It said in a report today that the transition agreement reinforces the view that Brexit’s impact will be “manageable” for UK corporate issuers, despite increased bureaucracy costs under an FTA. And it was “mildly positive” to UK banks as it “reduces downside risks to growth and revenues.” Also, risk of disorder Brexit is “somewhat mitigated”, it reinforces the central scenario of “gradually moderating growth” in the UK. However, Moody’s warned that uncertainty regarding the future relationship between UK and EU prevails until a ” conclusive final agreement” is reached.

The UK and EU start intensive talks on the most troublesome topic in Brexit negotiation today, the Irish Border. Both sides agreed, back in December, on the principle of avoiding a hard border between Ireland and Northern Ireland. However, there are key differences on the way to fulfil this principle. And there seems to be no agreeable solution yet. The negotiation team will try to address areas like customs, food safety, animal health and regulations of goods and come up with something for next EU summit in June.

Last month, EU proposed a backstop option if there will be no solution on Irish border. And that is, Northern Ireland will remain in the customs union. But that was bluntly objected by UK Prime Minister Theresa May.

Brexit Secretary David Davis reiterated that position on Sunday. Davis said that while UK agreed to a “backstop”, it will not be the one as proposed by the EU. He remained optimistic and said it’s “overwhelmingly likely” to solve the problem in the context of a trade and customs agreement. And he added, “there are ways of dealing with this. You can’t just say ‘we haven’t done it anywhere else’ – we haven’t attempted to do it anywhere else.”

Bundesbank President, Jens Weidmann, a known ECB hawk, called for ending stimulus again today. He painted an upbeat picture of Eurozone economic outlook and hailed that “the upswing is now everywhere on broad feet; the growth rates of the Member States are now scattering noticeably less. The unemployment rate has fallen to 8.6 percent, its lowest level since the end of 2008. The sentiment indicators continue to move at very high levels. This indicates that the favorable economic development continues for the time being.

ECB economists projected 2.4% GDP growth in 2018, 1.9% in 2019 and 1.7% in 2020. Also, They forecast inflation to be at 1.4% in 2018 and 2019, and then rise to 1.7% in 2020. And to Weidmann, that is “a level that is broadly consistent with our medium-term definition of price stability.” With this background, “it is not surprising that the financial markets have been expecting net bond purchases to end in 2018.” He also emphasized that “the end of net purchases is only the beginning of a multi-year process of monetary normalization. That’s why it’s so important to actually start soon.”

Regarding interest rates, Weidmann said that “the markets see a first rate hike around the middle of the year 2019, which is probably not entirely unrealistic.”

In a speech titled, “A Compass to Prosperity: The Next Steps of Euro Area Economic Integration”, IMF managing director Christine Lagarde outlined her recommendations. She focused on three of the reform areas for Eurozone officials to consider in the review in the coming months. The ares include a modernized capital markets union, an improved banking union, and a move toward greater fiscal integration, starting with the creation of a central fiscal capacity.

In particular, she mentioned IMF’s proposal of a “rainy-day fund” for building up assets in good times. During a downturn, countries could receive funding to help offset budget shortfalls. And, in extreme cases, ” the fund would be allowed to borrow, however any borrowing would be repaid by members’ future contributions.” Though, she emphasized that ” it will be a temporary cushion  and not a permanent pillow.”

China’s WTO embassador Zhang Xiangchen: “Lock this beast back into the cage”

Zhang Xiangchen, China’s Deputy International Trade Representative and WTO embassador urged the organization complained about US unilateral tariffs at a WTO meeting today. He criticized that “US is setting a very bad precedent by bluntly breaching its commitment made to the world” as it has agreed not to apply such tariffs without TWO approval. And he urged WTO members to jointly “lock this beast back into the cage of the WTO rules”.

He added that “unilateralism is fundamentally incompatible with the WTO, like fire and water. In the open sea, if the boat capsizes, no one is safe from drowning.” And, “we shouldn’t stay put watching someone wrecking the boat. The WTO is under siege and all of us should lock arms to defend it.”

US Treasury Secretary Steven Mnuchin said in a Fox News Sunday interview that the US is having “very productive conversations” with China. And he’s “cautiously hopeful we can reach an agreement” to avert the tariffs on USD 50-60b announced last week. Mnuchin noted that both countries agreed on reducing the US trade deficit to China. And, they were trying “to see if we can reach an agreement as to what fair trade is for them to open up their markets, reduce their tariffs, stop forced technology transfer.”

But Mnuchin emphasized that the US is still on track to impose the Section 301 tariffs unless there is an “acceptable agreement” for Trump to sign off on. He also noted that “we’re not afraid of a trade war, but that’s not our objective.” And, “in a negotiation you have to be prepared to take action.”

Separately, the WSJ reported that Mnuchin and US Trade Representative Robert Lighthizer sent a letter to Chinese Vice Premier Liu He last week, detailing the list of specific request for China. And the list is reported to include reduction of Chinese tariffs on US vehicles, purchases of semiconductor products and larger access to China’s financial markets.

RBNZ jointly announced the policy target agreements with Ministry of Finance today. Employment is now formally added to its mandate. The statement retained price stability as a target. RBNZ should target to keep annual CPI inflation between 1-3% over medium term. And focus is to keep inflation near to the 2% mid-point. Additionally, the with stable general price level maintained, the monetary would “contribute to supporting maximum sustainable employment within the economy.” Overall, the announce is widely expected as a result of the new government’s RBNZ review. And, there wouldn’t be any change to the neutral to slightly dovish bias of RBNZ as Adrian Orr just take over as the governor.

NZD trades generally higher in Asian session after trade balance data. Accord to Stats NZ Tatauranga Aotearoa, for February 2018 compared with February 2017, goods exports rose NZD 446 million or 11% yoy to NZD 4.5 billion. Goods imports rose NZD 187 million or 4.6% to NZD 4.2 billion. Import was a new high a new high for total imports in a February month. The previous high was NZD 4.1 billion, in February 2017. The monthly trade balance was a surplus of NZD 217 million. That equals to 4.9% of exports. 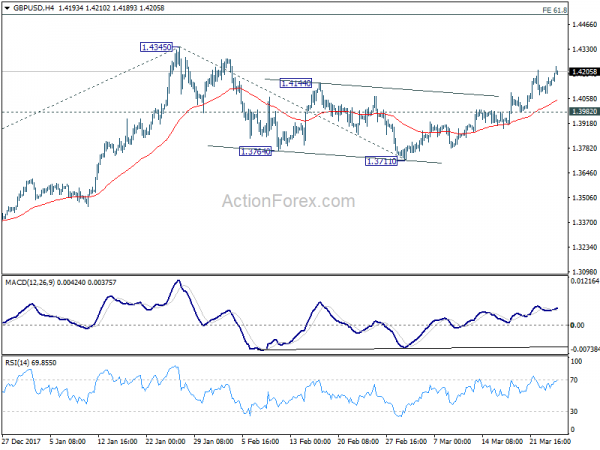 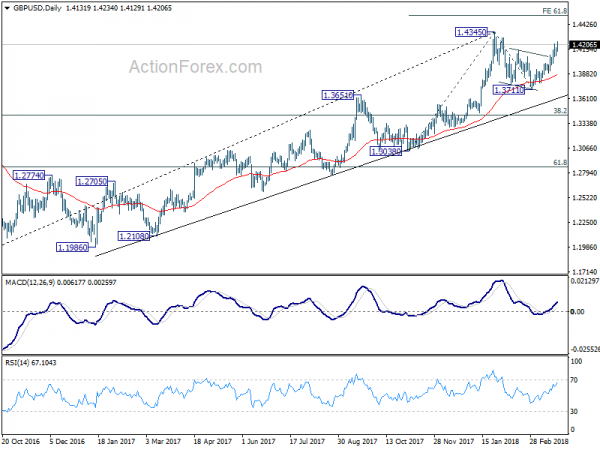