Australian dollar strengthens broadly in Asia session as lifted mildly by China’s trade data. The Aussie is also among the strongest ones for the week, together with Canadian Dollar and New Zealand Dollar. Euro suffered some selloff overnight, in particular against, Sterling. But the common currency quickly found footing against Dollar.

The financial markets are pretty steady elsewhere. Nikkei is trading up 0.67% at the time of writing while HK HSI is flat. DOW jumped 1.21% to close at 24483.05 but it’s limited below near term resistance at 24622.3. S&P 500 was also capped by equivalent resistance at 2672.08. After a brief surge to 1365.24 earlier in the week, Gold dipped back into established range and is hovering around 1340 for the moment. On the other hand, WTI crude oil is staying firm at around 67 after this week’s rally.

Technically, one key focus today is 1.2302 in EUR/USD. Despite yesterday’s selloff, EUR/USD is still holding onto this minor support level. That makes the rise from 1.2214 slightly in favor to extend through 1.2396 resistance. Meanwhile, EUR/AUD is also pressing 1.5857 support for the moment. Firm break of which will be an early sign of medium term trend reversal and could drag the cross down to 1.5621 in near term.

Syria tension is temporarily off the focus for the moment. Attention has turned to report that US President Donald Trump ordered White House economic adviser Larry Kudlow and Trade Representative Robert Lighthizer to examine the benefits of re-entering the Trans-Pacific Partnership trade pact. That sounded to be another 180 degree turn in Trump’s position as withdrawing TPP was among the first things he did after taking office.

However, Trump himself tweeted today that “Would only join TPP if the deal were substantially better than the deal offered to Pres. Obama. We already have BILATERAL deals with six of the eleven nations in TPP, and are working to make a deal with the biggest of those nations, Japan, who has hit us hard on trade for years!”

Japan Finance minister Taro Aso also said that Trump “is a person who could change temperamentally, so he may say something different the next day”. Aso also emphasized that “after the U.S. withdrawal, Japan, recognizing the significance of free trade, has led the initiative in pulling together the TPP 11.”  Aso would welcome US rejoining “if it’s true” and hailed that “our efforts have borne fruit if the United States judged it would be better to rejoin.”

China reported a rate trade deficit of USD -5b in March versus expectation of USD 27.8b surplus. That’s also the first monthly trade deficit since last February. Imports rose 5.9% yoy while exports dropped -2.7% yoy. Trade surplus with US dropped to USD 15.3b. In CNY terms trade balance came in at CNY -30b deficit versus expectation of CNY 160b surplus. Imports dropped -9.8% yoy while exports also dropped -9.8% yoy.

New Zealand BusinessNZ Performance of Manufacturing Index (PMI) dropped -1.1 to 52.2 in March. That’s also the second consecutive decline in 2018 even though it still signaled expansion. Nonetheless, BusinessNZ’s executive director for manufacturing Catherine Beard noted a positive point that the proportion of positive comments in March (55.1%) picked up from both February (51.4%) and January (50.7%).  BNZ Senior Economist, Craig Ebert said that the weak spot in March’s PMI was its production index.

The final day of the week could be quite quiet. Germany will release March CPI final in European session. Eurozone will also release trade balance. Later in the day, US will release U of Michigan consumer sentiment.

EUR/AUD drops to as low as 1.5848 today and breaches 1.5857 support. Intraday bias is cautiously on the downside now. Sustained break of 1.5857 will be an early sign of trend reversal and deeper fall should be seen to 1.5621 key support for confirmation. On the upside, above 1.5904 will indicate support from 1.5857 and turn bias neutral first.

In the bigger picture, the case for medium term reversal is building up in EUR/AUD. Bearish divergence condition in daily MACD indicates further look of upside momentum ahead of 1.6587 key resistance (2015 high). Break of 1.5621 should confirm medium term topping and bring deeper fall back to 1.5153 and possibly below. Meanwhile, even in case of up trend resumption, we’d be cautious on strong resistance from 1.6587 to limit upside and bring reversal.. 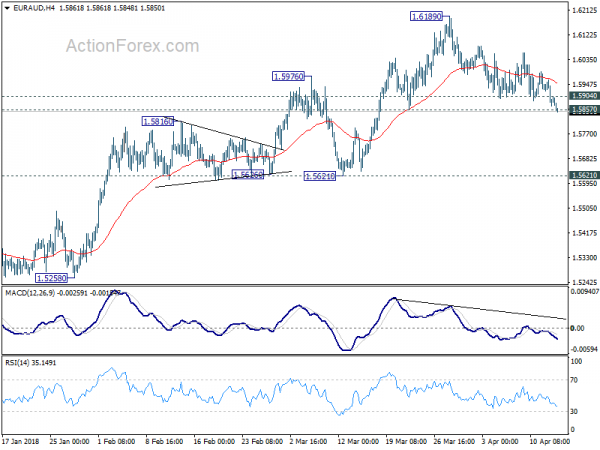 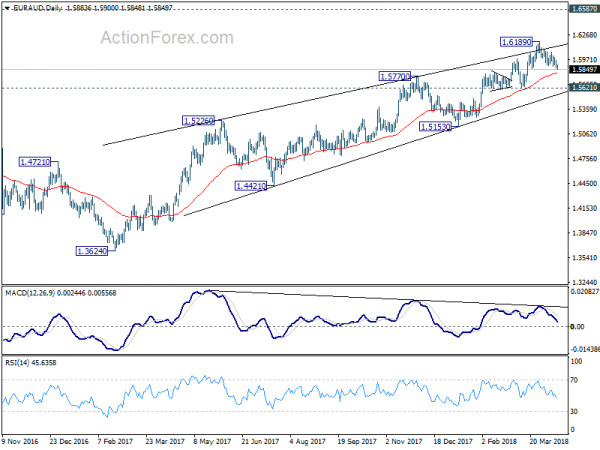