Dollar surged overnight as boosted by the strong rally in US treasury yield. 10 year yield gained 0.047 to close at 2.914, after hitting as high as 2.934. It’s now close to a key resistance, February’s high at 2.943. The greenback remains firm in Asian session. For the week, Dollar is trading as the second strongest one, follow Euro, which was helped by the strong rebound in EUR/GBP as well as the rally in EUR/CHF. Talking about EUR/CHF, it halted somewhat at 1.2 key level. But buying emerges again as markets are heading into European session. At the time of writing, it just hit 1.2004. US yields and Swiss Franc will continue to be the focuses of today. And attention will also be on Canadian inflation and retail sales.

Technically, there are a few points to note. AUD/USD’s sharp fall overnight and break of 0.7443 argues that rebound from 0.7642 has completed. As the pair is bounded well inside near term falling channel, it should now be heading back to 0.7642 and below to extend recent fall from 0.8135. GBP/USD’s break of 1.4144 suggests that a short term top was already formed at 1.4376 and deeper fall could now be seen through 1.3965 support. EUR/GBP’s firm break of 0.8739 resistance is taken as indication of near term reversal. Stronger rally should be seen through 0.8796, and it’s possibly heading back to 0.8967 resistance.

Cleveland Fed President Loretta Mester expressed her support for more rate hike this year. She said in a prepared speech for University of Pittsburgh’s graduate school of business that “If the economy evolves as I anticipate, I believe further gradual increases in interest rates will be appropriate this year and next year.” She added that “continued gradual reduction in monetary policy accommodation, given the economic outlook, will put monetary policy in a better position to address whatever risks, whether to the upside or to the downside, are ultimately realized.”

SNB Jordan: No need to change monetary policy even though EUR/CHF is back at 1.2

EUR/CHF continues to press the historical level at 1.2, the SNB imposed floor which was suddenly given up in 2015 and caused panic selling. Now the cross is back at this level. SNB Chairman Thomas said in an interview that the depreciation of the Swiss Franc is in the “right direction”. Nonetheless, the currency as a safe haven is prone to change and the situation is “fragile”. So the SNB will “remain very prudent”. Jordan added that “there’s no need to do anything regarding monetary policy at this moment”, as “we are convinced that the current monetary policy is still necessary.”

Japan national CPI core slipped back to 0.9% yoy in March, down from February’s 1.0% yoy, meeting market expectations. It will take a few more months to see if it’s only a blip or a change in trend. Core inflation had an impressive up this year but momentum has been slowing. It’s already looking a be challenging for inflation to meet BoJ’s own media projection of 1.4% in the current fiscal year. And BoJ might need to delay the timing for hitting 2% target again, if the slowdown in inflation persists.

Separately, BoJ Governor Haruhiko Kuroda stepped up his warning on protectionism, as he arrived at the G20 summit of finance ministers and central bankers. He said there will be “quite comprehensive” debate on trade during the meeting. And he emphasized that “many countries share the view they benefit greatly from free trade, so I don’t think protectionism will spread and lead to a decline in global growth. But the risk is there.” He added that “protectionism isn’t having a huge impact on Japan’s economy yet. But the risk is right in front of us, so we need to carefully watch how developments unfold.”

China ambassador to US Cui: Let’s have a more positive and cooperative mindset

Chinese Ambassador to the US Cui Tiankai said in an article in the official Xinhua news agency that “forty years of diplomatic ties and cooperation have served the interests of both countries quite well.” And, “in addition to all the bilateral benefits we have gained from this relationship, we have also seen its positive impact on the broader region of the Asia-Pacific and the world.”

He urged that “if we have a more positive and cooperative mindset, we could see clearly the emerging trends in the world, seize new opportunities, and turn challenges into opportunities.” And he emphasized that China is “against any trade war” and believes “any dispute should be worked out through dialogue and consultation.” But Cui also warned that if US insists on a trade war, China will retaliate.

In the bigger picture, decisive break of 1.1832 should now extend the medium term up trend through prior SNB imposed floor at 1.2000. 2013 high at 1.2649 should be the next target. Outlook will remain bullish as long as 1.1445 support holds, even in case of deep pull back. 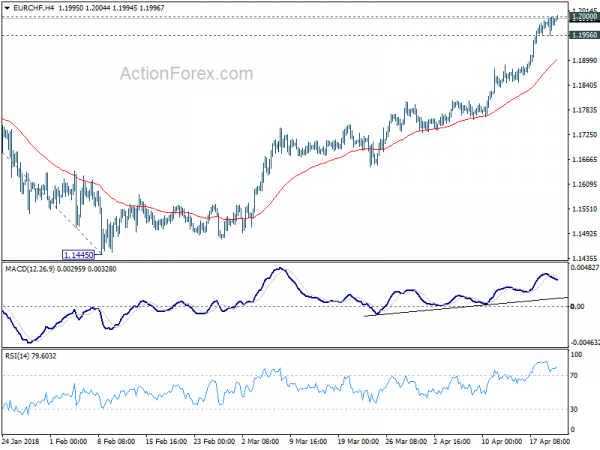 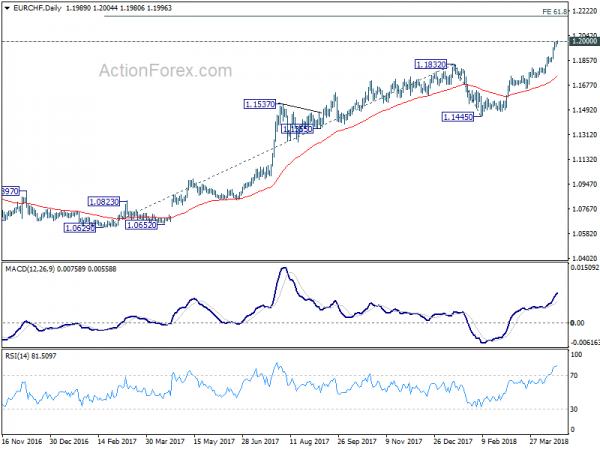