Dollar is trading mildly lower today but remains the overwhelmingly strongest one for the week. The greenback was, on the one hand, pushed higher overnight thanks to the steep post ECB selloff in Euro. Dollar index hit as high as 91.63 and continued to build up the case of medium term trend reversal. But gain was capped as 10 year yield dipped back below 3% level to close at 2.990. The greenback will now turn to US Q1 GDP for more guidance.

Elsewhere in the currency markets, Sterling is broadly higher today and is trading as the second strongest for the week. Q1 GDP data from UK will catch most attention in European session. Euro, despite yesterday’s selloff, is actually just mixed for the week, trading in black against Yen, Swiss Franc, Aussie and Kiwi. Yen showed little reaction to the expected BoJ rate decision, and the batch of mixed economic data. While the meeting between South Korean leader Moon Jae-in and North Korean leader Kim Jong-un is historical, it has little impact in the markets today.

BoJ announced to keep monetary policy unchanged by 8-1 vote as widely expected. Short term interest rate is held at -0.1%. The central bank will also continue with JGB purchases to keep 10 year yield at around 0%. The current pace of JPY 80T annual purchase is also maintained. BoJ also maintained the pledge to continue with the “Quantitative and Qualitative Monetary Easing (QQE) with Yield Curve Control” until year-on-year core CPI stay above 2% target in a “stable manner”.

Goushi Kataoka dissented again. It’s noted in the statement that “taking account of risk factors through fiscal 2020 such as the consumption tax hike and a possible economic downturn in the United States”, Kataoka believed it’s desirable to “further strengthen monetary easing”.

In the outlook for economic activity and prices report, BoJ noted that the economy is “likely to continue growing at a pace above its potential in fiscal 2018.” For 2019 and 2020, “the economy is expected to continue on a expanding trend supported by external demand. Ex-fresh food CPI continued to show “relatively weak developments” when excluding the effects of energy prices.

Below are the updated economic forecasts of BoJ:

BoJ also highlighted four major risks to the outlook. First is overseas developments including US economic policies and Brexit. Secondly is the impacts of the planned consumption tax hike in October 2019. Third is change in firms and households medium- to long-term growth expectations. Fourth is fiscal sustainability in the medium term to long term.

There are also three main risks identified to price developments. First is change in firms and households medium- to long-term inflation expectations. Second is items’s prices that are not response to output gap. Third is the developments in exchange rates and commodity prices.

A batch of data is released from Japan today. Tokyo CPI slowed to 0.6% yoy in April, down from 0.8% yoy and missed expected of 0.8% yoy. Industrial production rose 1.2% mom in March, well above expectation of 0.5% mom. Retail sales rose 1.0% yoy in March, below expectation of 1.5% yoy. Unemployment rate was unchanged at 2.5%.

Euro rebounded initially yesterday after ECB President Mario Draghi’s introductory statement talked about the “solid and broad-based expansion” despite weaker than expected data. However, there was a long of cautious tones in the Q&A section of the press conference. Draghi said the Governing Council didn’t even discuss monetary policy “per se” during the meeting. And that’s because more time is needed to assess whether the slowdown in Q1 was “temporary or permanent”. And Draghi also cautioned that understanding the factors behind the moderation in growth is “essential for informing our next decisions.”

The message showed that ECB policy makers are rather uncertain about the outlook. Eurozone Q1 GDP to be released next week on May 2 will give a clearer idea on how deep the moderation was. Then on May 3 there will be April CPI flash, which will show how well inflation is picking up again. Given that ECB’s next meeting on June 14 is less than two months away, there may not be enough data for policymakers to full assess the situation. And there is a chance that Draghi will stay noncommittal on the asset purchase program even after the June meeting.

Euro was deeply sold off after markets took a bit of time to digest the messages.

UK Q1 GDP will be the main focus in European session today. Growth is expected to slow from 0.4% qoq in Q4 to 0.3% qoq. Germany will release import price and unemployment, France will release Q1 GDP. Eurozone will release confidence indicators.

Intraday bias in GBP/USD remains neutral for consolidation above 1.3894 temporary low. Another recovery cannot be ruled out. But upside should be limited by 1.4089 minor resistance to bring fall resumption. Below 1.3894 will extend the fall from 1.4376 and target 1.3711 key support next. However, firm break of 1.4089 will turn focus back to 1.4376 high instead.

In the bigger picture, bearish divergence condition in daily MACD is raising the chance of medium term reversal. Also, note that GBP/USD has just failed to sustain above 55 month EMA (now at 1.4257) again. Focus is back on 1.3711 support. Firm break there will confirm medium term reversal and target 38.2% retracement of 1.1936 (2016 low) to 1.4376 at 1.3448 first. Break will target 61.8% retracement at 1.2874 and below. For now, sustained break of 55 month EMA is needed to confirm medium term upside momentum. Otherwise, we won’t turn bullish even in case of strong rebound. 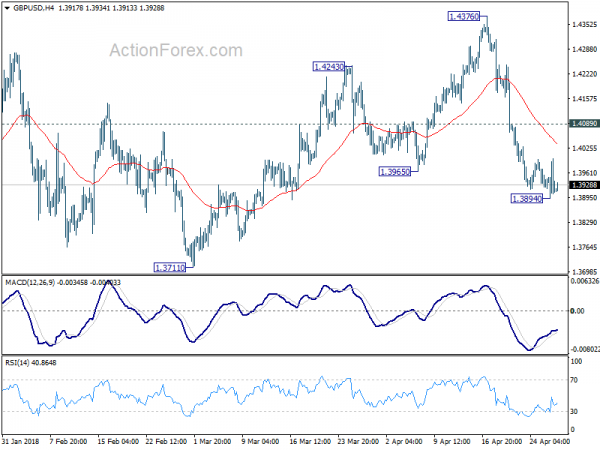 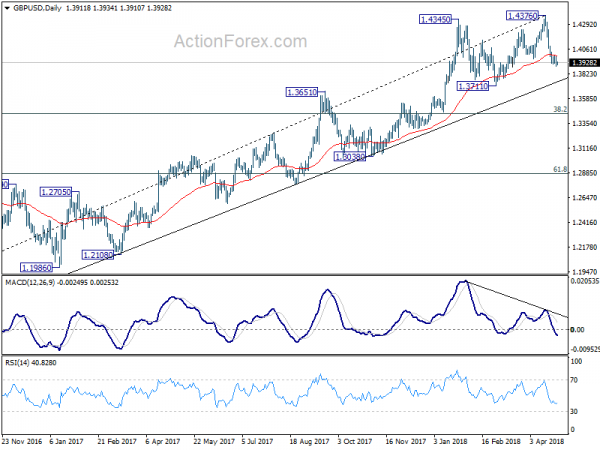