Dollar Firm as FOMC Awaited, Euro and Sterling Shaky ahead of GDP and PMI

After yesterday’s strong rally, Dollar retreats mildly today as markets await FOMC decision. For the week, the greenback remains the strongest one. Canadian Dollar follows as the second strongest, riding on better than expected GDP data. Sterling, on the other hand, is trading as the weakest one, as weighed down by disappointing PMI manufacturing. More tests are lining up there for the Pound with today’s PMI construction and tomorrow’s PMI services. New Zealand dollar is the second weakest for the week despite position employment data released today.

Technically, GBP/USD took out 1.3711 key support level yesterday while AUD/USD breached 0.7500. These developments solidified the case of medium term reversal in Dollar. Now that 1.2 handle is breached in EUR/USD, focus will be on whether there is further downside acceleration. In particular, Eurozone Q1 GDP will be a downside risk for the Euro.

There have been both positive and negative data released from the US since the March FOMC meeting. We expect policymakers to view slowdown in GDP growth as driven by temporary factors which should not affect the monetary policy outlook. Meanwhile, the central bank would likely acknowledge recent pickup in core inflation and wage growth, hailing them as reasons supporting further gradual rate hike: The median dot plot suggested three rate hikes this year while the market has increasingly priced in four. We expect the Fed to leave the policy rate unchanged at 1.50-1.75% at today’s meeting, leaving the rate hike (+25 bps) for June, when the updated staff projections would also be published. More in FOMC Preview: Focuses on Inflation and Shrugs Off Temporary Disruption on Growth.

Both Euro and Sterling are facing important event risks ahead. EUR/USD selloff accelerated after taking out 1.2154 key support last week. ECB president Mario Draghi’s comments at the post meeting press conference was the trigger. Draghi sounded uncertain on the factors behind Q1’s slowdown in Eurozone growth. And he even said that more time is needed to gauge whether the factors are temporary or permanent. The chance of getting a decision on whether to end the asset purchase program this year by June meeting is getting a bit slimmer. Euro suffered further selling after French GDP data, which showed growth slowed to 0.3% qoq, missing expectation of 0.4% qoq. Today’s Q1 Eurozone GDP will show ECB how deep that slowdown was. And tomorrow’s April CPI will tell ECB whether inflation was dragged down too.

Meanwhile, the Pound has been sold off after recent data misses dented the chance of a May BoE hike. BoE Governor Mark Carney also reminded people that there are “other meetings” in line. Last week’s Q1 GDP miss, which showed only 0.1% qoq growth was the final straw in ruling out a May hike. But is the UK economy rebounding well in Q2 to support a BoE hike later in the year? Yesterday’s PMI manufacturing was another miss. Markit noted that UK manufacturing sector “lose further steam” in Q2, with “growth of production, new business and employment all slowed.” And “while adverse weather was partly to blame in February and March, there are no excuses for April’s disappointing performance, making the chances of a near term hike in interest rates by the Bank of England look increasingly remote.” Today’s PMI construction and tomorrow’s PMI services will give a fuller picture.

The China Caixin PMI manufacturing rose to 52.5 in April, up from 51.0, above expectation of 50.9. Dr. Zhengsheng Zhong, Director of Macroeconomic Analysis at CEBM Group, warned that “manufacturers are facing a sharply deteriorating foreign demand environment as new export orders declined for the first time in 17 months in April.” And, while overall operating conditions improved, “uncertainty in exports has increased significantly, and the dependence of the Chinese economy on domestic demand is rising.”

BoC Governor Stephen Poloz said in a speech overnight that seeing some good pickups in wages in the last 6-8 months, the Canadian economy is in a “phase we call the sweet spot”. And, the policymakers are becoming “more confident” that less monetary stimulus is needed. There is a concern that interest rates are “really low” comparing to anything that can be described as neutral. Interest rates are “headed” higher and the question is just when.

Poloz cited some factors restraining growth, including uncertainty about US trade policies, renegotiation of NAFTA and new mortgage rules. But he noted that “those forces will not last forever”. And, “as they fade, the need for continued monetary stimulus will also diminish and interest rates will naturally move higher.”

But for now, Poloz indicated that the timing of the move will be guided by incoming data. And, it’s too soon to judge the impact of the prior rate hikes on the economy yet.

EUR/USD’s fall is still in progress and is pressing 161.8% projection of 1.2475 to 1.2214 from 1.2413 at 1.1991. Intraday bias remains on the downside and firm break of 1.1991 will target 200% projection at 1.1891 next. On the upside, above 1.2054 minor resistance will indicate temporary bottoming and turn bias neutral for consolidations. But upside of recovery should be limited well below 1.2214 support turned resistance to bring another decline. 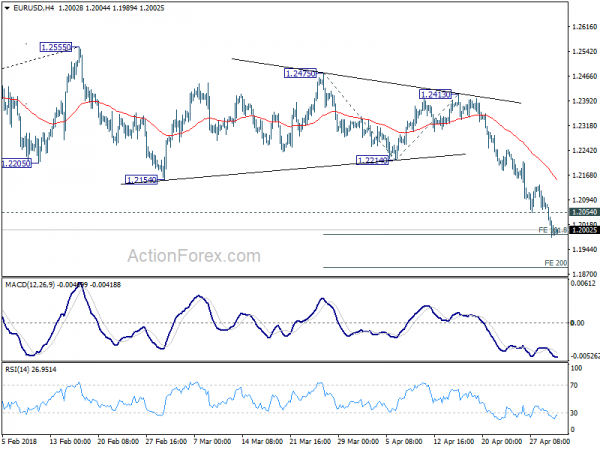 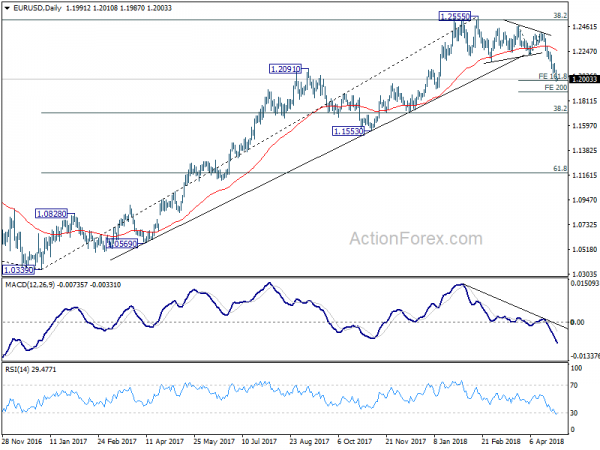