Dollar is trading slightly lower today as markets digest recent against ahead of FOMC rate decision and statement. Slightly better than expected ADP employment is shrugged of by the markets. Euro survived the test of GDP data and recovers mildly. Sterling also gets some support from better than expected UK construction PMI. While there is expectations for Fed will comment of recent economic data, the markets might eventually leave with empty hands. And traders could need to sit through a quiet session.

In other markets, DAX surges strongly today and is up 1.2% at the time of writing. But CAC is just up 0.15% while FTSE is up 0.32%. US futures point to a flat open as markets stay cautious. Gold recovers mildly today but struggles to stay above 1310 handle so far. It will likely continue to press 1300 psychological level.

US ADP added 204k in April, little sign of slowdown

US ADP private sector employment rose 204k in April, slightly above expectation of 200k. Ahu Yildirmaz, vice president and co-head of the ADP Research Institute said in the released that “the labor market continues to maintain a steady pace of strong job growth with little sign of a slowdown”. Mark Zandi, chief economist of Moody’s Analytics also noted that “At this pace, unemployment will soon be in the threes, which is rarified and risky territory, as the economy threatens to overheat.”

There have been both positive and negative data released from the US since the March FOMC meeting. We expect policymakers to view slowdown in GDP growth as driven by temporary factors which should not affect the monetary policy outlook. Meanwhile, the central bank would likely acknowledge recent pickup in core inflation and wage growth, hailing them as reasons supporting further gradual rate hike: The median dot plot suggested three rate hikes this year while the market has increasingly priced in four. We expect the Fed to leave the policy rate unchanged at 1.50-1.75% at today’s meeting, leaving the rate hike (+25 bps) for June, when the updated staff projections would also be published. More in FOMC Preview: Focuses on Inflation and Shrugs Off Temporary Disruption on Growth.

Eurozone GDP growth slowed to 0.4% qoq in Q1. But that was inline with expectation. Unemployment rate was unchanged at 8.5% in March, staying at the lowest level since December 2008, meeting expectation. PMI manufacturing was revised up to 56.2 in April, from 56.0. Chris Williamson, Chief Business Economist at IHS Markit noted that “the manufacturing sector saw growth weaken further at the start of the second quarter, but let’s not lose sight of the fact that the overall pace of expansion remains encouragingly solid.” Still, ” the trend in the surveys in coming months will provide important clues as to the degree to which underlying demand may be waning and the extent to which policymakers should be concerned about the health of the economy.”

UK PMI construction rose to 52.5 in April, up fro 47.0 and beat expectation of 50.5. That’s also the highest reading in 5 months. Tim Moore, Associate Director at IHS Markit, however, noted that “the recovery from March’s low point is somewhat underwhelming and provides an indication that the construction sector has been treading water at the very best in recent months.” Also, “survey respondents noted that heightened economic uncertainty continued to hold back construction growth in April, with risk aversion among clients leading to delays with spending decisions on new projects.”

The China Caixin PMI manufacturing rose to 52.5 in April, up from 51.0, above expectation of 50.9. Dr. Zhengsheng Zhong, Director of Macroeconomic Analysis at CEBM Group, warned that “manufacturers are facing a sharply deteriorating foreign demand environment as new export orders declined for the first time in 17 months in April.” And, while overall operating conditions improved, “uncertainty in exports has increased significantly, and the dependence of the Chinese economy on domestic demand is rising.”

Touching of 1.3665 minor resistance suggests temporary bottoming at 1.3579. Intraday bias in GBP/USD is turned neutral first. Some consolidations could be seen. But even in case of strong rebound, upside should be limited by 4 hour 55 EMA (now at 1.3817) to bring fall resumption. Below 1.3579 will extend the decline from 1.4376 to 1.3448 fibonacci level next. 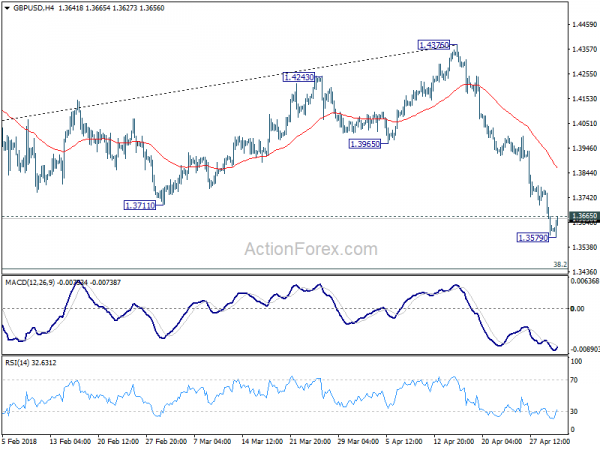 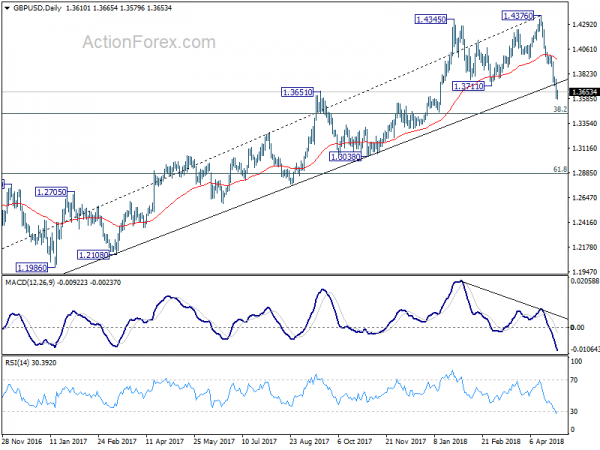