The forex markets open the week rather quietly today. Dollar is trading mildly firmer in tight range against other major currencies. Aussie is so far the weakest one today, getting no support from positive business condition and confidence data. Markets could remain quiet today with UK on holiday. The economic calendar is also relatively light.

Technically, with near term minor support levels intact, the greenback is expected to rise further against all, except Yen. While USD/JPY’s decline slowed after hitting 108.64 last week, the pull back from 110.02 could still extend deeper. The depth of which will depend on how much support USD/JPY would get from channel line (now at 108.72).

BoJ March meeting minutes: Not the time to consider stimulus exit yet

In the minutes of March BOJ meeting, some members emphasized the need to have the best communications to the markets. To be more specific, “it was important for the BOJ to thoroughly explain to the public … that the economy had not yet reached a phase where it should consider the timing and measures of a so-called exit from monetary easing,” Also “while normalization, or a gradual reduction in the degree of monetary accommodation, could become a topic for consideration in the future, the BOJ needs to explain to markets that normalization … would be different from monetary tightening,”

Australia NAB business condition rebounded notably from 15 to 21 in April. That’s also a rerecord high since the survey started in March 1997. Business confidence also rebounded from 8 to 10. Alan Oster, NAB Group Chief Economist noted in the release that the results reinforces the evidence of “robust” business activity. Except manufacturing and retail, conditions increased in all industries. And, strength in both business conditions and confidence suggest that “economic growth will strengthen and that over-time”.

Meanwhile, falling unemployment rate should “eventually translate into upwards pressure on private sector wages”. That would put RBA into a position to “start increasing the current emergency low policy rate:. NAB maintained the forecast for RBA to hike later this year. However, “as hard evidence of a firming in wages growth is yet to appear in the data, and unemployment for the moment stuck at around 5.5%, the risk is that any action by the RBA will be delayed into 2019”.

RBNZ to stand pat this week, likely throughout 2018 too

Two central banks will meet this week. RBNZ is expected to keep the official cash rate unchanged at 1.75%. There is little chance of a surprise given the CPI slowed deeply to 1.1% yoy in Q1. RBNZ Governor Adrian Orr also said after the release that “very benign inflation going forward without doubt, as we’ve forecast.” According to a Reuters poll, all 16 economists surveyed expected RBNZ to stand pat this week. 14 economists expected RBNZ to hold throughout 2018. 8 forecasts RBNZ to hike by the end of Q3 2019.

BoE to stand pat, eyes on new forecasts and voting

BoE is widely expected to keep bank rate unchanged at 0.50%. Asset purchase target will also be maintained at GBP 435B. The expectation of a May hike waned after recent batch of weak data. UK CPI grew merely 0.1% qoq in Q1. April PMIs showed that rebound at the start of Q2 was weak. And, UK CPI also slowed more than expected to 2.5% yoy in March, giving BoE less pressure to hike immediately.

It’s now seen that BoE would delay the gradual tightening of of monetary policy. But interest rates are still on the path of going up. Markets are pricing in around 50% chance of hike by August. But we’d argue that November is a better timing until there is a drastic turn in momentum in the latter half of Q2.

But such market expectations could shift drastically. Firstly, BoE will release the quarterly Inflation Report and we’ll see how the data released in the past three months affect the growth and inflation projections. Secondly, it would be interesting to see if the two known hawks, Ian McCafferty and Michael Saunders, would change their mind and refrain from voting for rate hike again. And turn in the two could trigger steep selloff in the Pound.

In addition to the two central bank meetings there are a number of economic data to watch too. US CPI will be the most important one. Also, there will be Australia retail sales, China trade balance, ECB monthly bulletin, UK productions and Canada employment. Here are some highlights for the week: 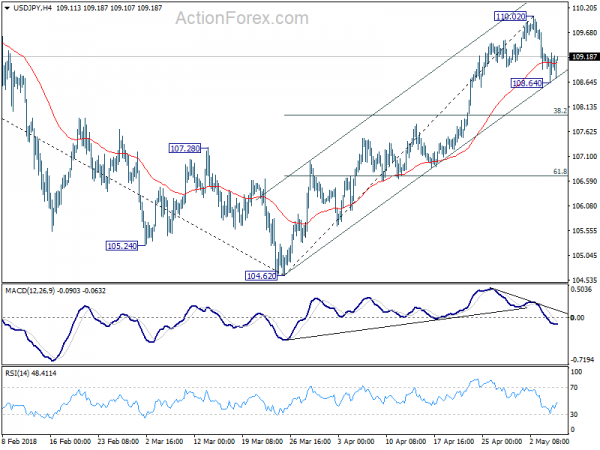 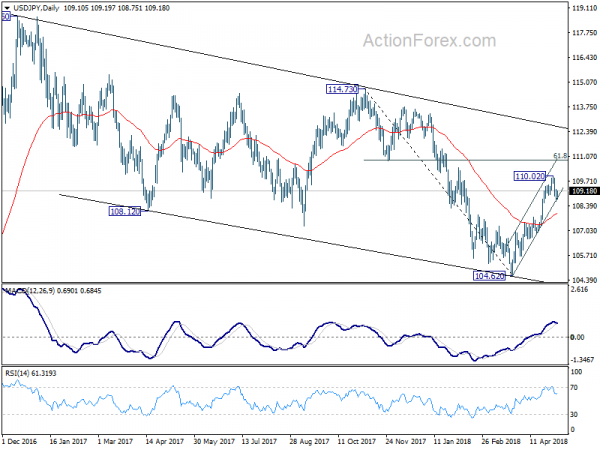