Yen trades broadly lower today, expect versus New Zealand Dollar. Solid risk appetite is a factor pressuring the Yen. Nikkei closed up 0.47% at 28865.86, hitting the highest level in more than three months. Strong performance of cosmetics maker Shiseido is a factor driving the Japanese markets up. But mood in Asian is generally lifted by US President Donald Trump’s concession to China. Trump tweeted that he wanted to help Chinese tech company ZTE to “get back into business, fast”. That came just before Chinese Vice Premier Liu He’s visit to Washington to resume trade talks. Hong Kong HSI also responded positively to the news and is trading up over 1.1% at the time of writing.

Elsewhere in the forex markets, Euro and Sterling are trading generally higher for the moment. But momentum is not too apparent. Technically, EUR/USD is struggling to take out 4 hour 55 EMA (now at 1.1961) and there is some distance from 1.2 handle. GBP/USD is also held below 1.3617 minor resistance and this is no sign of follow through rebound yet.

US Bolton: Europeans companies could face US sanctions

Trump’s national security advisor John Bolton talked bout the decision to withdraw from the Iran nuclear pact on Sunday. He indicated that it’s “possible” for the US to impose sanctions on European companies that continue to do business with Iran. And, he noted that “it depends on the conduct of other governments”.

Bolton also added, “the president said in his statement on Tuesday that countries that countries that continue to deal with Iran could face U.S. sanctions. Europeans are going to face the effective U.S. sanctions, already are really, because much of what they would like to sell to Iran involves U.S. technology, for which the licenses will not be available.” But he said he’s “hopeful in the days and weeks ahead” there would be a deal that really works.

France Le Maire: US not economic gendarme of the planet

Separately, French Finance Minister Bruno Le Maire urged EU to ” to work among ourselves in Europe to defend our economic sovereignty.” And, EU should hold “collective discussions with the United States to obtain… different rules” covering European companies that do business with Iran. Le Maire added that “Do we accept extraterritorial sanctions? The answer is no.” And, “Do we accept that the United States is the economic gendarme of the planet? The answer is no.”

UK PM May reiterated commitment on nuclear pact to Iran

UK Prime Minister Theresa May reiterated UK’s commitment to the Iran nuclear deal to Iran President Hassan Rouhani over a phone call during the weekend. And she urged release of jailed British Iranians “on humanitarian grounds”. A Downing Street spokesman said that ” it is in both the UK and Iran’s national security interests to maintain the deal and welcomed president Rouhani’s public commitment to abide by its terms, adding that it is essential that Iran continues to meet its obligations.”

Foreign Ministers of the UK, Germany and France will meet this Tuesday to discuss on keeping the Iran nuclear after after US withdrawal.

No breakthrough in NAFTA talks as May 17 deadline looms

The latest round of NAFTA negotiations ended last week without a breakthrough. US Trade Representative Robert Lighthizer just said pledge to continue working with Mexico and Canada. House Speaker Paul Ryan has given a May 17 deadline for notification of the new agreement. That’s a working deadline for having the new agreement to go through the current Congress by December.

But both Canadian Foreign Minister Chrystia Freeland and Mexican Economy Minister Ildefonso Guajardo are more focused on the “quality” of the deal rather than the pressure of time. Freeland said that “the negotiations will take as long as it takes to get a good deal.” Guajardo emphasized that “we’re not going to sacrifice the quality of an agreement because of pressure of time.”

On the data front, Japan domestic CGPI rose 2.0% yoy in April. Machine tools orders rose 22.2% yoy. The calendar is empty today and markets would listen to comments from a number of ECB and Fed officials.

Looking ahead, there is no central bank activities except RBA minutes on Tuesday. Politically, trade will be a major theme as US-China negotiation will resume in Washington. Also, there is a working deadline of May 17 for NAFTA negotiations. New Zealand will also release its annual budget. On the data front, UK and Australian employment data, Japan GDP and Canadian CPI, could be the most market moving. US retail sales and regional Fed surveys would be watched too. Here are some highlights for the week:

In the bigger picture, for now, price actions from 137.49 are viewed as a corrective pattern only. Hence, while, deeper decline would be seen, strong support is expected at 38.2% retracement of 109.03 to 137.49 at 126.61 to contain downside and bring rebound. Up trend from 109.03 (2016 low) is expected to resume afterwards. Though, sustained break of 126.61 will be an important sign of trend reversal and will turn focus to 124.08 resistance turned support. 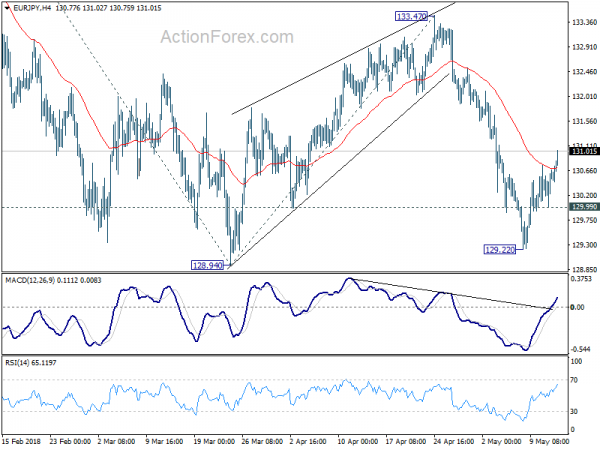 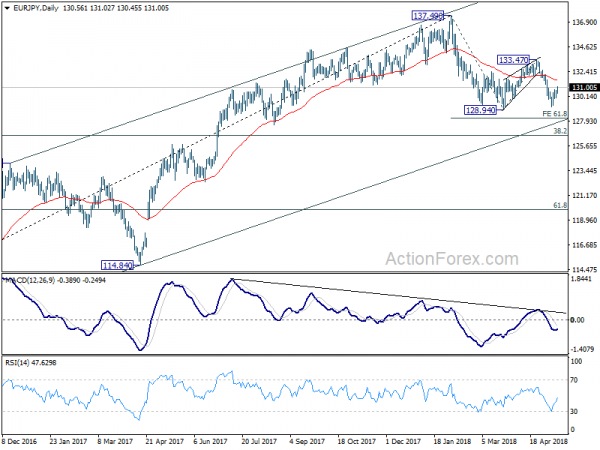