Yen suffers broad based selling in today as lifted by return of risk appetite. Asian equities trade generally higher on receding fear of US-China trade war. The joint statement released on Saturday is seen as a “vow” to avoid trade war. It’s affirmed by comments from US Treasury Secretary Steven Mnuchin that it’s “on hold”. Nikkei close up 0.31% at 23002.37. HK HSI is up 1% at the time of writing. In the currency markets, Australian, Canadian and US Dollar are the strongest one so far. New Zealand Dollar follows as Yen as the second weakest after poor retail sales data.

Technically, GBP/USD’s downside breakout catches most attention as the fall from 1.4376 finally resumes. USD/JPY and EUR/USD are extending recent dollar bullish move. A question in mind is whether USD/CHF’s consolidation from 1.0056 has completed. Also, AUD/USD and USD/CAD are kept in range so far and need more stimulus for a breakout.

US-China joint statement vowing not to launch a trade war

US and China issued a joint statement on Saturday to conclude the trade talks with Chinese Vice Premier Liu He on May 17 and 18. There was no mentioning of any number, but the statement said there were “consensus on taking effective measures to substantially reduce” US trade deficit in goods with China. And, China agreed to “significantly increase purchase” of US goods and services.

Additionally, there would be “meaningful increases” in US agriculture and energy exports to China, “expanding trade” in manufactured goods and services, encouraging “two-way investment” with “fair, level playing field for competition”. China also pledged to work on laws and regulations on intellectually property protections.

The Chinese State-owned Xinhua news agency described the statement as “vowing not to launch a trade war against each other”. Full statement could be found here.

Commenting on the US-China joint statement on trade, Treasury Secretary Steven Mnuchin said “we are putting the trade war on hold.” And he added, “we have agreed to put the tariffs on hold while we try to execute the framework”, referring to the agreement.

Trump’s top economic adviser Larry Kudlow said they made “a lot of progress”, even surpassed their own expectation after the Beijing meeting. But it’s not at the stage of taking the threat of tariffs on USD 150B of products yet. And, it’s “too soon to lock that (USD 200B reduction in trade deficit) in” yet. Though he emphasized that “the direction here is the key”.

Kudlow also added that Commerce Secretary Wilbur Ross will go to China and “looking into a number of areas where we’re going to have greatly significant increases,” including energy, liquefied natural gas, agriculture and manufacturing”.

RBA chief economist Alan Oster noted that the ” change reflects the fact there is no sign yet of stronger wages growth and unemployment has been stuck around 5.5% for the best part of a year.” Also, he added that once the tightening cycle starts “further rate increases will be very gradual”. And after the first move in May 2019, the next move will be “not until November 2019”.

New Zealand retail sales was a big disappointment to the markets. Ex-inflation retail sales volume grew merely 0.1% qoq in Q1, much lower than expectation of 1.0% qoq. That’s also a sharp slowdown from Q4’s 1.4% qoq. Besides, it’s the weakest quarter since 2015.

Stats NZ noted in the release that “retail spending in the first three months of the year was relatively flat despite rising job numbers, high migration, and record international tourism.”

Looking ahead, big week for Euro and Sterling

The calendar is rather empty today with Swiss, France, Germany and Canada on bank holiday. The upcoming events in the week, though, will be crucial to Euro and Sterling. The question in ECB policy makers mind is whether Q1’s slowdown was temporary, or is it something deeper. The PMIs and German Ifo data will provide more insight. In added, ECB monetary policy meeting accounts will shed some lights on how worried ECB officials were.

For GBP, the main question is whether BoE is ready to raise interest rate in August, November, or no at all? The BoE announcement earlier this month was not dovish at all. Governor Mark Carney viewed Q1 slowdown as temporary. And he expected upward revision from the dismal 0.1% qoq growth. We’ll have that revision, if any, on Friday. In addition, there will be inflation report hearing on Tuesday, CPI on Wednesday, and retail sales on Thursday too. We believe that by the end of this week, we’ll see if there is any chance of August hike.

From US, there will be FOMC minutes and durable goods orders. But we’re not expecting anything special from there.

USD/JPY’s rally resumed after very brief consolidation and reaches as high as 111.37 so far. Intraday bias is back on the upside for trend line resistance at 112.33. Firm break there will target 114.73 resistance next. On the downside, below 110.60 minor support will turn bias neutral again and bring consolidations. But strong support should be seen from 109.14/110.02 support zone to bring rally resumption. 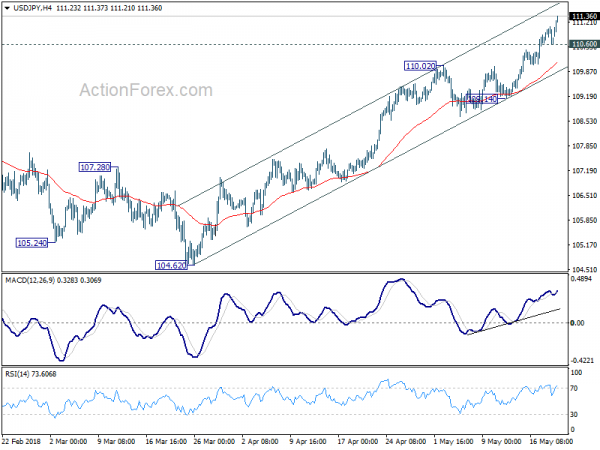 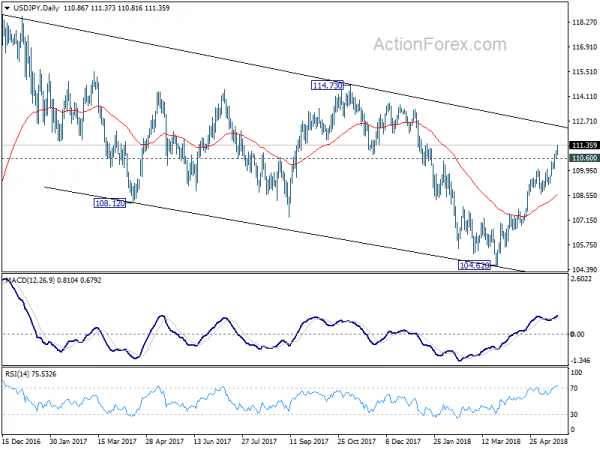