Markets were clearly dissatisfied with Donald Trump’s comment with the selloff in the US markets. Trump said he’s “not satisfied” with the trade talks with China. And called the negotiations just a “start”. That’s rather inconsistent with Treasury Secretary Steven Mnuchin’s comment that the meeting made “very meaningful progress”. The comments also reminded investors of the capricious assertiveness in Trump’s administration, as European council president Donald Tusk described.

For example, it remains unclear when the planned Kim-Trump summit will happen on June 12 in Singapore. Trump just said that “whether or not it happens, you’ll be knowing pretty soon”. The June 1 deadline of temporary exemption on steel tariffs on Canada, Mexico and EU is looming but there is no indication on what’s to come next. Uncertainties, as pointed out by many, are already hurting business confidence. In addition, Secretary of State Mike Pompeo stepped up the “maximum pressure” on Iran and outlined a list of steep demand for Iran to meet before lifting sanctions. That’s a clash with the EU, which pledged to preserve the original nuclear deal.

Technically, GBP/JPY’s break of 148.16 minor support is worth a mention. It suggests that the corrective recovery from 147.04 has completed at 149.99. And the cross is ready to resume near term clearly. CPI data from UK could be a make or break factor for the cross. But then, there will be UK retail sales and Q1 GDP revision later in the week too.

UK Chancellor of Exchequer Philip Hammond rejected the call from business leaders on customs union. Hammond said that government shared the CBI’s desire to “minimise frictions and burdens, to avoid new barriers in Ireland and to grow British exports”.

However, he emphasized that “we do not agree that staying in the customs union is necessary to deliver them.” And he tried to persuade the business leaders that ministers were “confident we can develop a solution that will allow us to move forward while meeting your concerns”.

This was in response to CBI President Paul Drechsler’s speech in the in the group’s annual dinner. There Paul Drechsler urged US Prime minister Theresa May to “break the Brexit logjam and fast”. And he added that UK should remain in the customs union with the EU “unless and until an alternative is ready and workable”.

RBNZ has significant room for easing, no need for unconventional policies

RBNZ released a 22-page bulletin article titled “Unconventional monetary policy since the Global Financial Crisis” today. In a summary, RBNZ hailed that the “unconventional” monetary policies adopted by some major central banks were “successful in easing financial conditions”. And, there were “emerging research suggests they boosted inflation and activity.”

Separately, RBNZ Assistant Governor John McDermott said in an interview that while there is “no imminent prospect” of using unconventional policy, the probability of needing them at this point in the cycle is higher than it ever was in history”. Therefore, “it would be silly of us not to be ready just in case.”

The Nikkei flash Japan manufacturing PMI dropped to 52.5 in May, down from 53.8 and missed expected of 54.6. In the release it’s noted that new order growth softened to 9-month low. However, input prices surged at the fastest pace since January 2014. Also, Joe Hayes, Economist at IHS Markit, noted that “headline figure signalled the weakest expansion in manufacturing growth in nine months.” Employment growth also eased. But, new export sales rose faster due to USD/JPY rise. Meanwhile, “input prices soared at the fastest pace in 52 months.”

Also from Japan, all industry activity index rose 0.0% mom in March, below expectation of 0.1% mom.

UK CPI will be a major focus in European session today. Headline CPI is expected to be unchanged at 2.5% yoy in April. Core CPI is expected to slow to 2.2% yoy. UK will also release RPI, PPI, house price index as well as CBI reported sales. BoE Governor Mark Carney offered nothing new is his inflation report hearing yesterday.

To him, slow down in Q1 was due to ” temporary and idiosyncratic factors”. Meanwhile for known hawk Michael Saunders, the dismal 0.1% qoq growth was “erratic as a side effect of the weather or possibly may be revised away.” But the key will lies in firstly, whether inflation will slow further down to lower side of the target band near at 2%. Secondly, whether there is satisfactory rebound in Q2. And thirdly, of course, whether there was really an upward revision in Q1’s GDP figure.

Today’s CPI, tomorrow’s retail sales, and Friday’s GDP revision will give us a fuller picture on the economy, and thus, the chance an August BoE hike.

Similarly, Eurozone May PMIs to be released today will also shed some lights on how the rebound is going in the bloc in Q2.

Later in the day, US will release PMIs, new home sales. And more importantly, Fed will release FOMC meeting minutes. We’re not expecting anything drastic from the FOMC minuets. It won’t likely change the fully priced in June hike. And Fed in on course for another hike in September. Meanwhile, it’s too early to tell whether one more hike in December is needed. 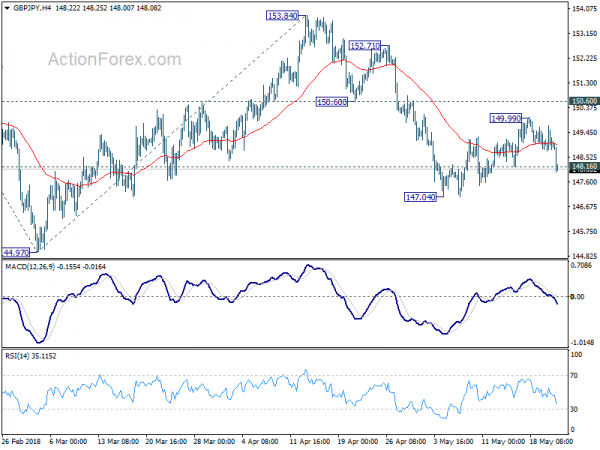 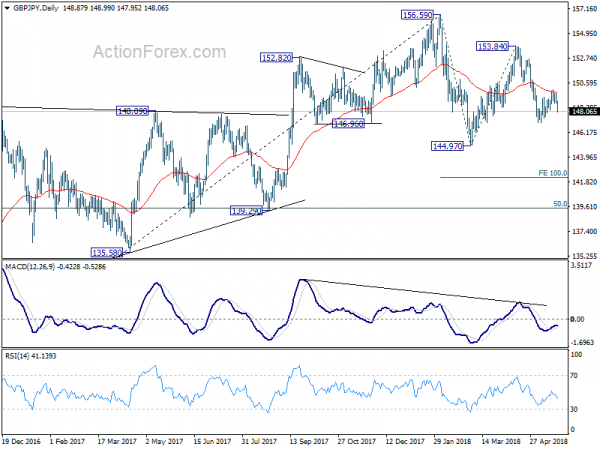