While Euro remains the worst performer for today, selling slowed and it recovered much ground as in early US session. Investors seemed to be calmed by Five Star leader Di Maio’s facebook comment that he never see leaving the Euro. Also, there are reassessment on how bad the situation could be. 10 year Italian yield reached as high as 3.313 earlier today and is now back at 2.926, but still up 0.257. German 10 year bund yield dropped to as low as 0.187 earlier and is now at 0.331, still down -0.022. German-Italian yield spread is back below 300 bps. US 10 year yield also back at 2.885 after dipping to as low as 2.807.

Overall in the currency market, New Zealand and Australia Dollar follow Euro as the second and third weakest. Yen remains the strongest on risk aversion. But Swiss Franc lags behind Dollar and Canadian Dollar. Technically, EUR/CHF just touched 1.1445 key support level but recovered. Eyes will be on whether it could bottom at around 1.1445 as expected. USD/JPY broke 108.82 cluster support and now revived the bearish case that larger down trend from 118.65 is not completed.

Euro and Italian bonds are given a mild lift after Five Star leader Luigi Di Maio said the never sought to leave the Euro via facebook comments. He said that with the “Government of Change” they should be meeting with other EU countries to explain to the the “economic policy that has never foreseen the exit from the euro.” Meanwhile, he blamed the over 300 German Italian spread on the lack of prospects of the interim technocrat government.

Separately, Bank of Italy Governor Ignazio Visco warned that Italy is just a few short steps away from “the very serious risk of losing the irreplaceable asset of trust”. He defended that Italy is “not constrained by the European rules but by economic logic” and there was no “shortcut” to lower the country’s debt.

Eurozone money markets are quick to pare back pricing of ECB rate hike in June. Now, the difference between Eonia and forward Eonia rates dated for June 2019 ECB meeting stands at 3 bps. That’s half of 6bps last week and 1/3 of 9bps earlier this month. The pricing indicates around 30% chance of a 10 bps hike in the -0.4% deposit rate by June next year. Though, it’s still generally expected that ECB would end the asset purchase program this year, as it has done its job already.

While Italy is definitely a concern for ECB policy makers, it should be reminded that they are not totally certain on the reasons for Q1’s slow down yet. And how well the economy rebounds in Q2 is a question to be answered. Based on current vulnerable market sentiments, Thursday’s Eurozone May CPI flash will be eve more crucial to Euro.

The UK EEF manufacturers’ organization slammed Prime Minister Theresa May’s “Max Fac” proposal for UK and EU customs as “naive” and “unrealistic”. Max fac, or maximum facilitation, is a technological border solution that May push to implement by the time a planned Brexit transition period ends in December 2020.

EEF Chief Executive Stephen Phipson said in a statement that the debate on MaxFac is “misguided”. The focus should be on whether it is good enough to “provide a frictionless border” for the “highly complex integrated supply chains with Europe. Also, focus is on whether it “can be implemented quickly enough to be ready for December 2020”. Phipson said the answer is “overwhelming no”. And, “it may have some long term benefits, but suggesting MaxFac is a solution to our immediate problems is a non-starter”.

China said to be considering to increase US coal imports

Bloomberg reported, quoting unnamed source, that China is considering to buy more coal from the US, as part of the plan to reduce trade surplus. In particular, China could boost purchase from West Virginia.

As in 2017, US coal just contributed a tiny portion of China’s import. 108.9m tons were from Indonesia, 79.9m ton from Australia, 34.0 tons from Monglolia. Only 3.2m tons were from the US. It’s unsure whether China has plan to cut imports from other countries.

He acknowledged that “our financial sector still has a lot room to open up relative to the requirements of economic and financial development.” And, “the three reforms — opening up the financial sector to internal and external firms, exchange rate mechanism, and capital account convertibility — have to be coordinated and pushed ahead together.”

St. Louis Fed President James Bullard urged caution on further rate hike in near term in a presentation at a seminar in Tokyo. And he laid out three reasons for discussions. First, market-based inflation expectations in the U.S. remain somewhat low. Second, the current level of the policy rate appears to be neutral, meaning it is putting neither upward nor downward pressure on inflation. Third, the U.S. nominal yield curve could invert later this year or in 2019, which would be a bearish signal for U.S. macroeconomic prospects,.

Here is the full presentation.

Canadian Foreign Minister Chrystia Freeland is on Washington today to continue NAFTA negotiations. Her spokesman Adam Austen said she will be there on Tuesday and Wednesday. And he added that “we’ve said all along we are ready to go (to Washington) at any time.”

Mexican Economy Minister Ildefonso Guajardo said last week that there is around 40% chance of concluding NAFTA talks before Mexican presidential election on July 1. But Guajardo will not be there at the Tuesday meeting. Instead, he is in Paris for meetings of OECD and WTO.

EUR/USD drops to as low as 1.1509 so far today. While it recovers mildly since then, it’s kept below 1.1640 minor resistance. Intraday bias remains on the downside for further decline. Current fall from 1.2555 is in progress and should target 50% retracement of 1.0339 to 1.2555 at 1.1447 next. On the upside, above 1.1639 minor resistance will turn intraday bias neutral again. But after all, near term outlook will remain bearish as long as 1.1995 resistance holds, in case of recovery. 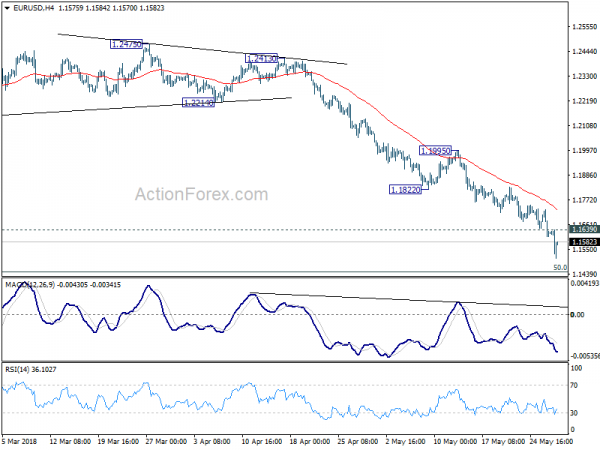 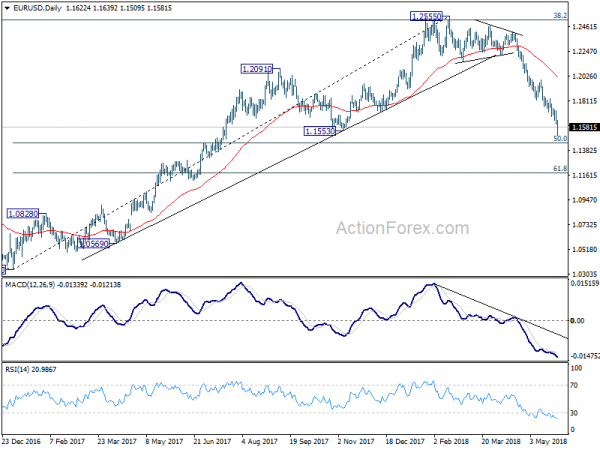