The forex markets are mixed today so far. Easing concerns over Italy political turmoil calmed markets temporarily. But the situation is not solve yet. Meanwhile, the upcoming decision on US steel tariff temporary exemption could turn sentiments around again. For now, Commodity currencies are generally higher with the help of receding risk aversion. Canadian is the second strongest for the week as lifted by more hawkish than expected BoC statement yesterday. But Yen is still following as the third strongest. Dollar, on the other hand, is the weakest one for the week.

Technically, Euro have formed temporary bottom against Dollar, Yen, Sterling and Aussie. More consolidation would be seen as markets await the development in Italy. But there could be some upside potential as Eurozone CPI might beat market expectation.

The turning point in Italy turmoil was anti-establishment Five Star Movement leader Luigi Di Maio’s willingness to find someone other than eurosceptic Paolo Savona as economy minister. Savona was vetoed by President Sergio Mattarella who emphasized that “the adhesion to the euro is a choice of fundamental importance”. For now, Savona is seen as a sticky point. Senior Five Star lawmaker Laura Castelli was quoted saying “it’s astounding that Paolo Savona, a person of great culture and political awareness, has not yet decided to take a step back.”

The political turmoil is far from being resolved yet. But at least for now, the risk of another election, which could be framed by the far-right League as referendum on Euro, appears to be lower. German 10 year bund yield closed at 0.376 yesterday. Italian 10 year bond year closed at 2.903. That is, the spread was still wider than 250.

Temporary exemptions to US steel tariffs to end tomorrow

The temporary exemptions from the US steel and aluminum tariffs are set to expire tomorrow. And it’s so far uncertain what will happen next. It’s widely reported Trump will start imposing the tariffs on EU. The decisions on Mexico and Canada are less certain as NAFTA negotiations continued to drag on. But there are reports that Trump will just go ahead with the tariffs too. Announcement could be made as soon as today.

It’s clear that EU, Canada and Mexico are prepared for retaliation. And the US announcement today could finally, formally, starts global trade wars between US and the world. The section 232 national security probe on automobile imports is also waiting on the line. The commerce department has announced to hold two days of public hearing in July for the probe.

The US Chamber of Commerce already criticized the probe and warned that tariffs “would deal a staggering blow to the very industry it purports to protect and would threaten to ignite a global trade war.”

Yesterday, Canadian dollar recorded the biggest one-day rally in two months after BOC’s more hawkish- than- expected statement. Policymakers turned less concerned over the economic outlook. As such, they dropped the words “cautious” and “over time” in the accompanying statement, a sign interpreted by the market as supportive for a rate hike in the near-term.

Bets of a rate July rate hike jumped to 65% after the announcement, from less than 50% before that. In our opinion, it might be premature to associate removal of “cautious” at the May meeting to “rate hike coming soon”. Intermeeting dataflow should be the key. More in BOC Removes “Cautious” Reference, But 2H17 Rate Hikes Experience Suggests Members Can Make Over-Aggressive Judgements

New Zealand ANZ business confidence dropped to -27.2 in May, down from -23.4. That is, a net 27% of businesses are pessimistic about the year ahead. Views on their “own activity” also dipped from 18 to 14. ANZ noted in the release that “the survey made for fairly uninspiring reading this month, with all aggregate activity indicators flat to falling. The economy still has good tailwinds in the form of fiscal stimulus and the record-high terms of trade, but may be tiring nonetheless.” Meanwhile, ANZ’s composite growth indicator, a combination of business and consumer confidence, is consistent with around 2% y/y growth.

The China official PMI manufacturing rose to 51.9 in May, up from 51.4, and beat expectation of 51.4. PMI non-manufacturing rose to 54.9, up from 54.8 and beat expectation of 54.8. In the release, contributing analyst Zhang Liqun noted that the slight increase in PMI was just “short-term fluctuation” and carries “no trend significance”. The rise in export orders showed there is no chance in the growing trend. Rise in purchase prices and ex-factory prices suggested that the decline in PPI could be coming to an end. In short, the data suggested that the economy continued to grow steadily in May.

Later in the data, Canada will release GDP. US personal income and spending will be featured. PCE core is expected to slow slightly to 1.8% yoy in April. US will also release jobless claims, Chicago PMI and pending home sales.

USD/CAD’s sharp decline overnight dampened out bullish view. Intraday bias remains mildly on the downside for 1.2728 support. Break there will indicate completion of the rebound from 1.2526 at 1.3046. And in that case, deeper fall would be seen back to 1.2526 and below. Nonetheless, strong rebound from 1.2728 will put focus back to 1.3046 resistance first. Break there will revive the bullish case of trend reversal. 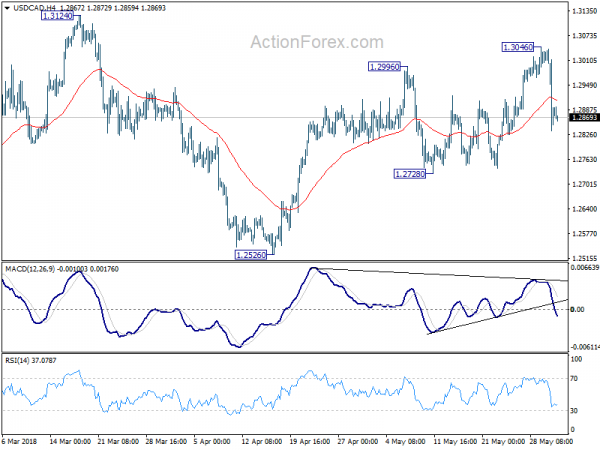 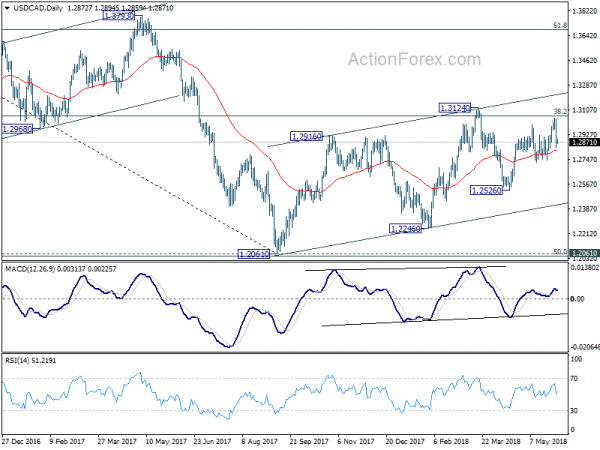