Dollar Higher on Hawkish Fed, Euro Dragged Down by Italy

Dollar rose broadly last week as markets received Fed’s hawkish rate hike rather week, despite initial hesitation. However, the greenback was just the second strongest, overshadowed by Canadian Dollar. Stronger than expected GDP data from Canada solidify the case of October hike by BoC. Furthermore comments by BoC Governor Stephen Poloz suggested that it’s cycle is not over yet. Sterling was the third strongest one as Brexit moved to the back stage, awaiting further developments.

Swiss Franc ended as the weakest one mainly on surging global treasury yields. Euro followed as the second weakest after Italy raised budget deficit target, not only for 2019, but for two more years afterwards. The lack of positive support to the Swiss Franc from Italy budget jitter argues that the Franc’s rally since mid-July was mainly due to emerging market problems, like Turkey and Argentina. The Franc didn’t care much about Italy so far. Yen was the third weakest, partly due to strength in treasury yields outside Japan, and partly due to return of risk appetite in Asia.

Fed raised federal funds rate by 25bps to 2.00-2.25% as widely expected. Most importantly, the revised projections suggested that doves have become less dovish. The long run federal funds rate estimate was also raised to 3.00%. It’s now less doubtful for Fed continue to raise interest rate to neutral level at around 3.00% and possibly one or two hikes above, as the median projections showed.

There is one argument that the good news on Dollar, that is, Fed’s rate path, is already reflected. And there is relatively little room for the greenback to extend the up trend. We’d tend to disagree with this view. Firstly, it’s clear that not all FOMC members are totally convinced of hiking towards neutral, like Dudley and Bostic. There are rooms for them to turn more optimistic and thus, solidifying the rate path.

Secondly, long term treasury yields are pressing key resistance level and we could see powerful rally if these levels are broken. More importantly, as we notice recently, rally in yields appear to be stronger at the long end. If the pattern follows, it would be a strong factor that comforts Fed doves.

Thirdly, the mystery of low unemployment rate and low inflation is still not solved. The possibility of sudden pick up in wage growth as unemployment drops further is there. And that could extend Fed’s cycle or even quicken it. So, there are indeed still a lot of upside potential Dollar.

Though, a main downside risk we see now is a landslide win by the Democrats in the mid-term elections. That might be a hindrance for Trump to continue with his hostile international trade policy, which has been lifting Dollar all the way. Returning back to negotiation table with China, and others, could weigh on the greenback.

Dollar index’s strong rebound confirmed that key support level of 38.2% retracement of 88.25 to 96.98 at 93.65 was well defended, in line with our view. It’s too early to confirm if DXY is resuming larger up trend. But at least, the range is set if consolidation from 96.98 is going to extend. For the near term we’d expect a take on 95.73 and break will bring retest on 96.98 high.

10 year yield edged higher to 3.11 last week but failed to take out 3.115 key resistance and retreated. However, Friday’s strong close should be noted. TNX gapped lower to 3.031 but ended up flat at 3.056. That should be a sign of underlying near term strength. We’d expect a retest on 3.115 soon.

And we’d reiterate that strong break of 3.115 will have multi decade channel resistance taken out too. That should confirm the start of an era of rising US treasury yields.

European markets dragged down by Italy and the issue will continue

Italy occupied a lot of the headlines in the EU last week. In short, the coalition leaders eventually forced Economy Minister Giovanni Tria to raise budget deficit target for the next three years to 2.4% of GDP, from his preferred 1.9%. Technically, speaking it’s within EU rules of sub 3% deficit. However, it drew strong criticism from EU officials.

European Commission Vice-President for the Euro and Social Dialogue Valdis Dombrovskis made it rather clear that 2.4% deficit target would put Italy in “breach of its obligations” as the Italian government is “obliged to improve its budget balance so as to reduce its debt mountain.” However, from EU’s angle, headline deficit has to be at around 1.6% or below to start having improvement in the structural balance of the country’s budget.

It’s doesn’t really matter which side, the anti-establishment Italian coalition or the EU, is right. The point is, both side will continue the clash ahead. As European Economics Commissioner Pierre Moscovici noted that nothing would be gained from a clash with Italy, but added “we don’t have any interest either that Italy does not respect the rules and does not reduce its debt, which remains explosive.”

Reactions from the European financial markets were overwhelmingly negative. Italian 10 year yield closed at 3.15, back near to peak hit in late August/early September.

German 10 year yield broke 0.50 handle in the middle of the week with hope that it could be back in non-crisis level. But it closed at 0.47 as safe haven demand flew back.

German DAX also suffered steep setback. Failing to sustain above 55 day EMA and rejection by near term falling trend line argues that the choppy from 132.04.31 is still on course for testing 11726.62 low.

China’s Shanghai SSE was boosted on new that MSCI is considering to significantly raise the weighting on A shares in it’s indices. SSE’s solid break of 55 day EMA and medium term falling channel suggests medium term bottoming at 2644.29, on bullish convergence condition in daily MACD. Key support of 2016 low at 2638.30 was also defended well. More upside should be seen in the near term back towards 2915.29 resistance. Though for now, we don’t see any reason for breaking 3000 handle yet. Nonetheless, developments in Asian markets could provide some additional support to Aussie and some pressure on Yen.

Our GBP/USD short strategy as noted in last weekly report, was entered at 1.3150. As GBP/USD’s decline from 1.3297 finally resumed on Friday, we’ve lowered the stop to break even at 1.3150 in this update. 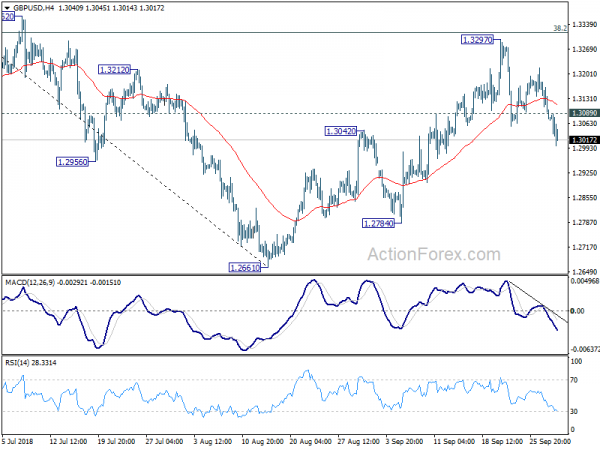 But there is one point to note. If the most bearish view is correct, current decline should be a wave three in a five wave sequence from 1.3297. And there should be some downside acceleration ahead. Therefore, ideally, we should not see a recovery through 1.3089 minor resistance. If 1.3089 is broken, there might be something wrong. 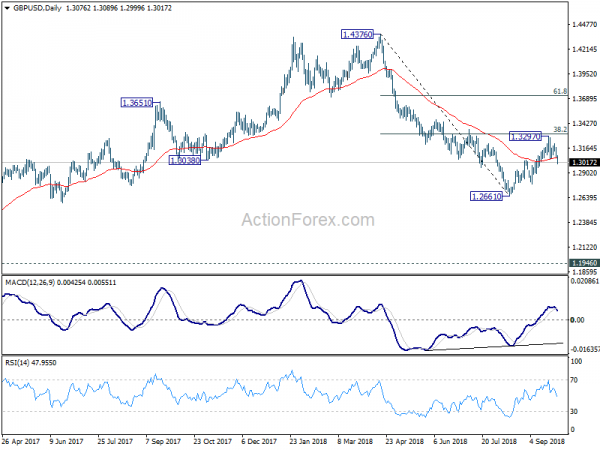 Therefore, to conclude, we’ll hold short in GBP/USD, keep the stop at 1.3150. Exit price will be determined later. At the same time, we’ll start to consider abandoning the position if 1.3089 is broken, even if the stop at 1.3150 is not hit. 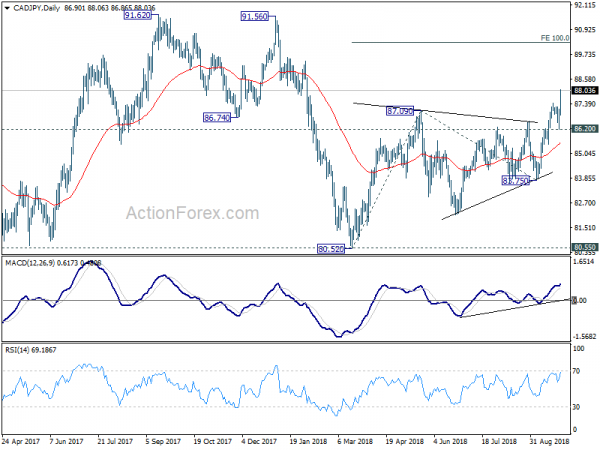 Risk reward could be boosted to 1:3.46 if we put the target at 91.55. However, looking at the weekly chart, we’re not too convinced that CAD/JPY is resuming the rally from 74.80 through 91.62. Current rise from 80.52 could just be a leg inside the range pattern. Thus, it may not be able to take on 91.62 high. Hence, having all considerations, we’ll give it a pass and won’t trade CAD/JPY for now. 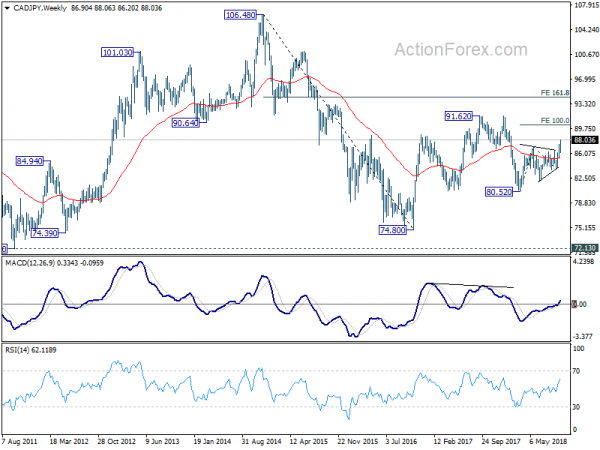 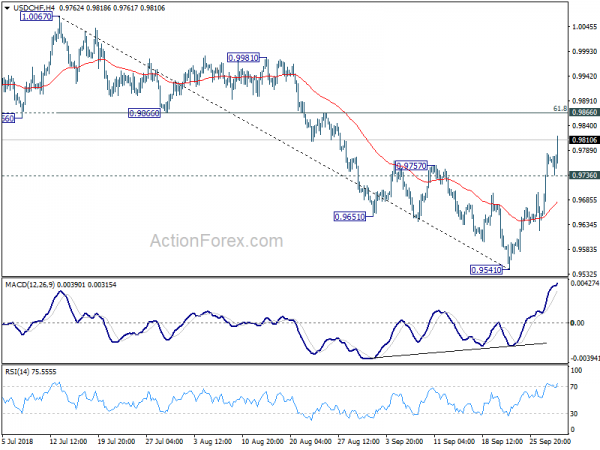 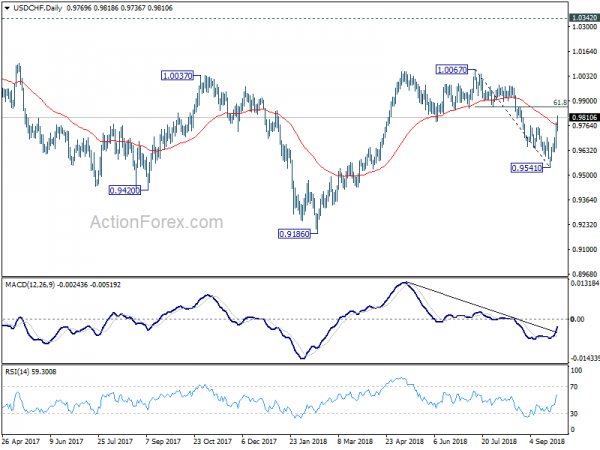 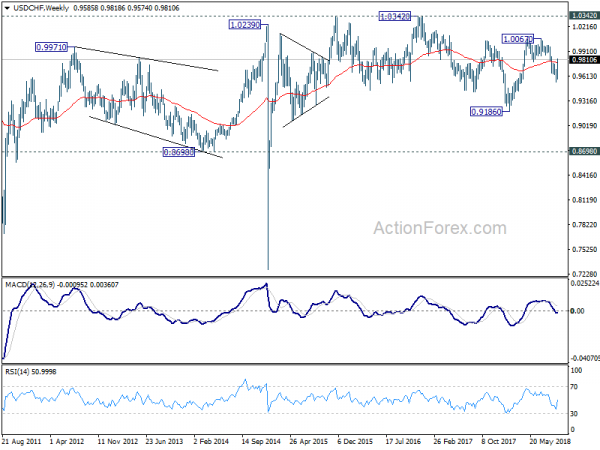 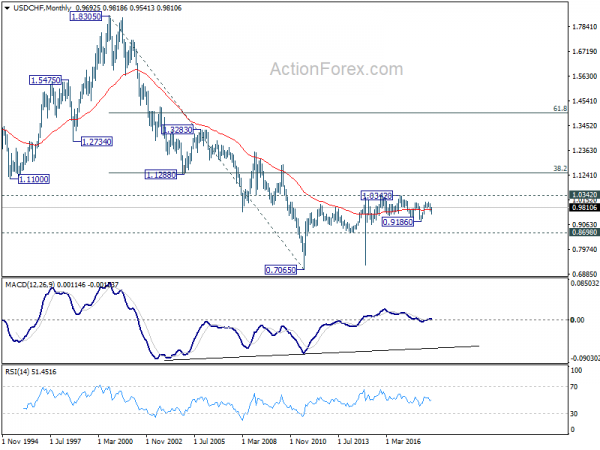