Action Forex
HomeMarket OverviewWeekly ReportDollar Surged on Treasury Yields and Bets on Fed Hikes, Except Versus...

Dollar Surged on Treasury Yields and Bets on Fed Hikes, Except Versus Sterling

It’s another week’s that’s full of headlines. Sterling ended as the strongest one on revised hope of a Brexit deal with the EU despite all the rhetorics. UK Prime Minister Theresa May also survived the Conservative Party conference without dance but no disaster. Dollar followed as the second strongest as boosted by strong economy data as well as strong rally in treasury yields. Friday’s mixed non-farm payroll could be a disappointment but the overall economic outlook is greater than good.

Yen is the third strongest one as partly supported by surging JGB yields. Also, rising global yields triggered risk aversions to towards the end of the week and helped lift the Yen. Canadian Dollar is the fourth. After initial boost by the trilateral trade deal with the US and Mexico, the USMCA, there was no follow through buying in the Loonie despite strong job data and oil price.

Euro somehow avoided broad based selloff after Italy revised its budget targets to more “acceptable” ones. But’s unsure how that is assessed by the EU eventually. And there are risks of downgrade ahead on Italy before the month end. Australian Dollar and New Zealand Dollar are the weakest ones. They’re firstly pressured by monetary policy divergence, secondly by risk aversion, in particular in Asia.

Looking ahead, the economic calendar is relatively light this week. A major focus is on how US treasury yields are going to extend the uptrend after taking out key resistance level last week. Also, US inflation data could have a hand on the momentum of yields. In turn, strength in yields might continue to pressure global equities, which even US indices tumbled towards the end of last week. And of course, China is back from holiday and could immediate face a disastrous open in its stock markets. And, it’s uncertain how far Brexit optimism could take Sterling to.

Markets have increased their bets on Fed’s rate hike next year after a week of hawkish Fed rhetorics, surging treasury yields and solid economic data. Fed Chair Jerome Powell described that there’s a “remarkably positive outlook” in the economy. Various forecasts predicted such favorable conditions to continue. And Powell said these forecasts are “not too good to be true”. That’s actually not much of a surprise based on recent comments from Powell.

The surprise was indeed the hawkish turn of Atlanta Fed President Raphael Bostic, which has been persistently cautioning flattening yield curve. He pledged before that “I will not vote for anything that will knowingly invert the curve”. But on Friday, he said that “Current conditions suggest, to me, that we ought to get to a policy stance where our foot is neither on the gas pedal – what we call an accommodative policy – nor on the brakes – what we call a restrictive policy”. That is, he is now pushing to hike till neutral. Furthermore, he also said he may have underestimated aggregate demand. And, “If that’s the case, the potential for overheating would require a higher path for rates than what I had been thinking,”

Surging US treasury yields, which took global yields higher too, was a factor that boosted Fed’s change of continuing with rate hikes. In particular, more strength is seen in the long end. 5-year yield closed up 0.123 at 3.071. 10-year yield rose 0.169 to 3.225. 30-year gained 0.198 to 3.395. Such development should be welcomed by Fed officials who are concerned with flattening yield curves.

We’ve pointed out numerous times that TNX has now broken multi-decade channel resistance, which is era defining. It remains to be seen if TNX could really start a new multi-decade up trend. But the signs are promising so far, with a double bottom formation completed (1.394, 1.336). The real test for the medium term will be 161.8% projection of 1.394 to 3.306 from 1.336 at 3.992, which is close to 4.000 psychological level.

DOW closed the week down after hitting record high

DOW jumped to record high at 26951.81 last week but retreated sharply to close the week lower at 26447.05. Breach of 26349.34 support suggests short term topping. But there is not indication of trend reversal yet. Outlook will stay bullish as long as 55 day EMA (now at 25945.25) holds. The record run is expected to resume sooner or later.

However, it’s believed that the steep pull back in DOW was caused by the sharp rally in yields. If that the case, the road ahead for US stocks will be bumpy, given that we expect yields to continue their rally. From a technical perspective, we’re like to point out one interpretation.

That is, 28262/28310 is possibly a significant resistance level for DOW to breakthrough. We’ll see how it goes.

Now, back to the Dollar index, the break of 95.73 resistance is in line with our expectations. Further rise is expected in near term. But there is not enough evidence to suggests up trend resumption yet. Hence, we’d be cautious on topping below 96.98 high. That is equivalent to 1.1300 bottom in EUR/USD. Nonetheless, the range should be set even if Dollar index is going to extend the correction from 96.98 with another fall. That is, downside should be contained by 38.2% retracement of 88.25 to 96.98 at 93.64.

** Quick update at 0900GMT Oct 7, Sunday. China announces to lower RRR for some banks by 1% to release CNY 750B of funds (more details here). The move could trigger a rebound in Asian stocks on Monday, as well as AUD/USD. For now, it’s hard to predict how strong the market reaction is. So, we’ll CANCEL the AUD/USD short strategy, and wait-and-see first.

Our GBP/USD short (sold at 1.3150) was closed at 1.3079 with 71 pips profits as updated here. To recap, we made a big mistake in the view on EUR/GBP. The decline from 0.9097 was believed to have completed at 0.8847. The pull back from 0.8894 was corrective looking all the way, until downside acceleration after breaking 0.8847, which invalidated our view. Therefore, the anticipated rally in EUR/GBP which should drag down GBP/USD further didn’t happen.

Looking ahead, firstly, we’d expect global treasury yields rally to continue, as led by US. Thus, there is risk of deeper short term pull back in US equities. That should be a factor weighing down Asian markets. Additionally, let’s not forget that the Hong Kong stocks reacted negatively after the announcement of the USMCA trade deal. That’s something seen as rather negative for China, which was on holiday. Adding to that, rhetorics and news against China’s improper practices heated up last week, highlighted by US Vice President Mike Pence’s speech. Chinese stocks should come back from holiday sharply lower. And, focus will be back on key support at 2638 for Shanghai SSE. A break there could trigger some contagion effect to other parts of Asia.

AUD/USD’s break of 0.7084 support confirmed medium term down trend resumption last week. And based on the above anticipated developments, there would only be more downside for Aussie. Indeed, from a pure technical point of view, medium term fall from 0.8135 might even be resuming the long term down trend from 1.1079 (2011 high). 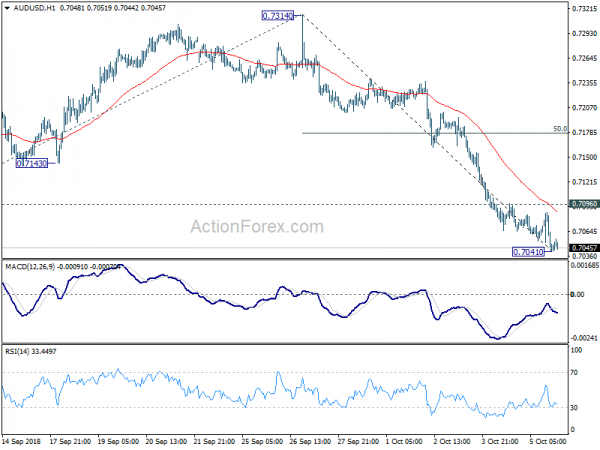 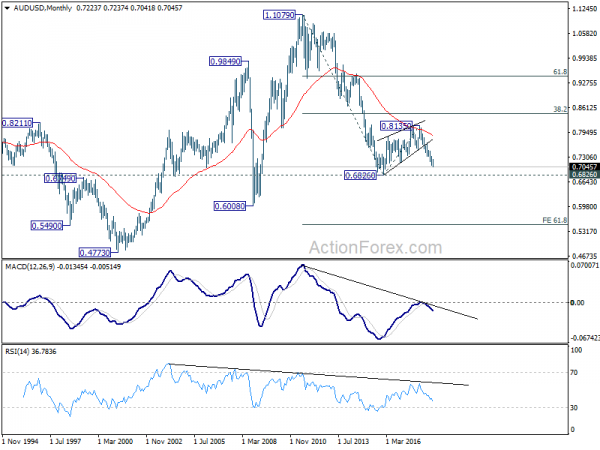 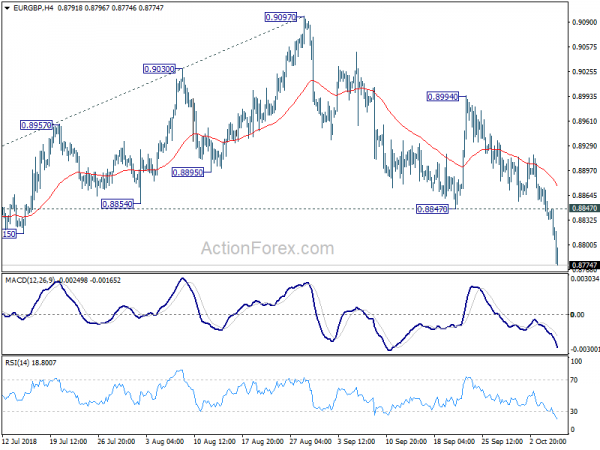 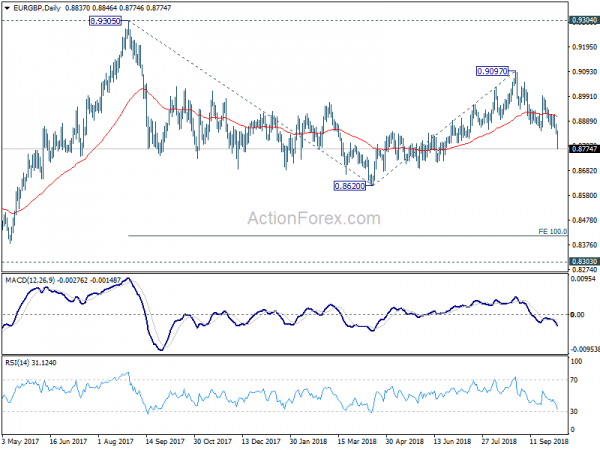 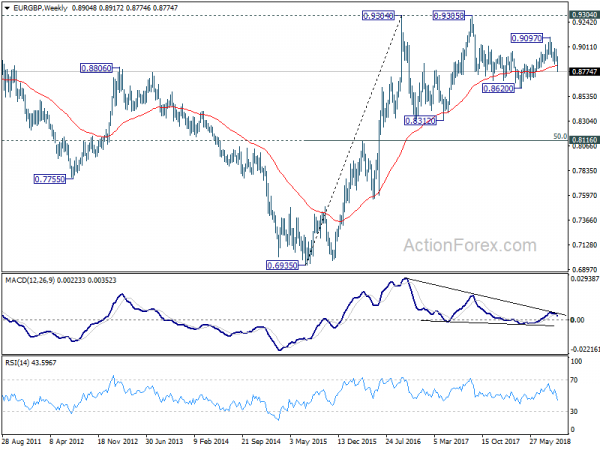 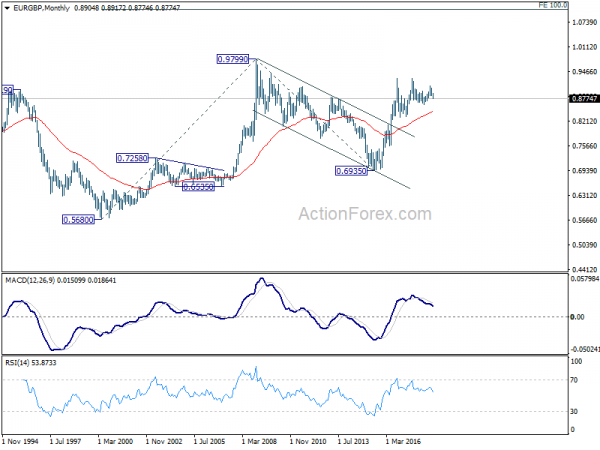