Fed Chair Jerome Powell’s speech last week was sort of a turning point. Stocks staged a strong rally and helped lifted Kiwi and Aussie as the strongest ones. Nevertheless, despite being sold off steeply, Dollar has indeed reversed much the the losses and ended as the third strongest one. Sterling ended as the weakest one as traders turned defensive ahead of the Brexit vote in the parliament on December 11. Yen was the second weakest for the week, followed by Canadian Dollar, which decline together with oil prices.

The immediate near term outlook of the markets will depend on the result of the Trump-Xi summit in Argentina. The two presidents are scheduled to have a dinner on Saturday night, as sideline of the G20 summit in Argentina. Ahead of that, there were a lot of rumors, comments and news floating around. For example, Trump indicated it’s “highly unlikely” for him to hold off raising tariffs on USD 200B in Chinese goods on January 1. He also tried to sound hardline, repeating that China wanted to make a deal, but he’s happy with the current one right now. There were also reports that both countries are exploring a trade pact.

It’s hard to determine whether the US-China news were real or just diplomatic smokescreens. So we’d refrain from making any prediction on the outcome. Nonetheless, we’re just hours away from know the results. So better just be patient.

Powell’s awkward change in his description of interest rate was a big mover in the markets last week. In short, he described interest rate as being “just below” neutral. For what ever reasons, that’s a sharp u-turn from being “a long way from neutral” as he said on October 3. Dollar dived sharply while stocks were shot up. But then there was no follow through selling in the greenback, even though stocks did edge a little bit higher after close.

So, after Powell’s words, investors have actually firmed up their expectation of December and March hikes. That is, federal funds rates will enter into the long run range of 2.50-3.50% as in September projections, but stop there. It could be kept below the central tendency of 2.8% to 3.0%, and well below the median long run range of 3.0%.

But of course such expectations could easily change with incoming data, Fed rhetorics and most importantly, December’s new economic projections. We’ll see.

10 year yield extended pull back, but downside should be limited

Dollar index had a rather volatile week last week. But after all, it stayed inside near term rising channel and above 55 day EMA. Thus, there is no indication of near term bearish reversal yet. Outlook remains mixed as it’s also limited by 61.8% retracement of 103.82 to 88.25 at 97.87. And, upside momentum is diminishing as seen in daily MACD.

On the upside, decisive break of 97.87 fibonacci level is needed to confirm upside momentum and up trend resumption. Meanwhile, rejection by 97.87, followed by break of 95.67 support will be a strong side of reversal. In this case, deeper fall should be seen back to 93.81 support. 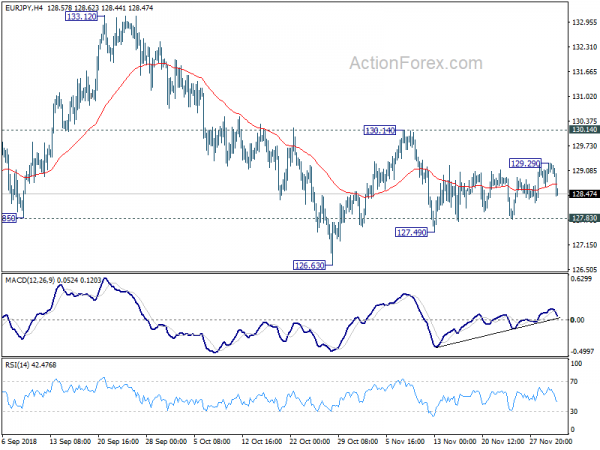 So in short, we’ll sell EUR/JPY on break of 127.80, with stop at 129.30. We’ll put 120.00 as target first. But we’d be cautious on the reaction fro 124.08 key support and might exit earlier. Meanwhile, we’ll hold our hands off on other pairs first before seeing reactions on the Trump-Xi meeting. 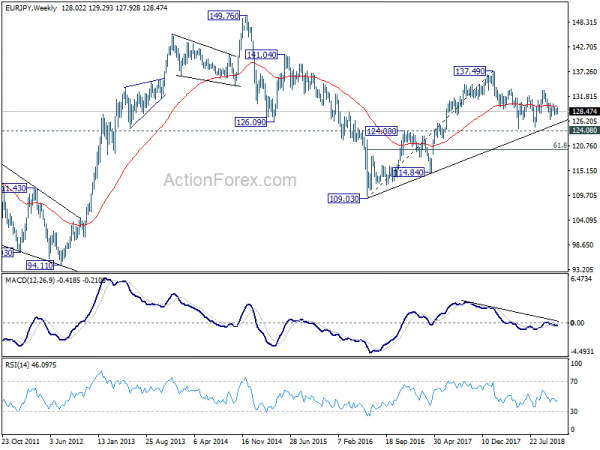 EUR/USD rebounded after hitting 1.1267 but lost momentum well ahead of 1.1472 resistance. Initial bias stays neutral this week first. As long as 1.1472 resistance holds, deeper decline is expected in the pair. On the downside, break of 1.1267 will target 1.1215 low first. Firm break there will resume larger down trend from 1.2555 for 1.1186 fibonacci level next. However, considering bullish convergence condition in daily MACD, firm break of 1.1472 will be suggest medium term bottoming and turn outlook bullish for 1.1814 resistance instead. 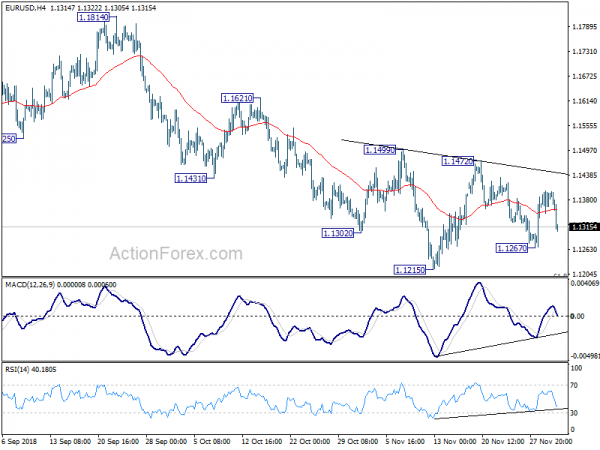 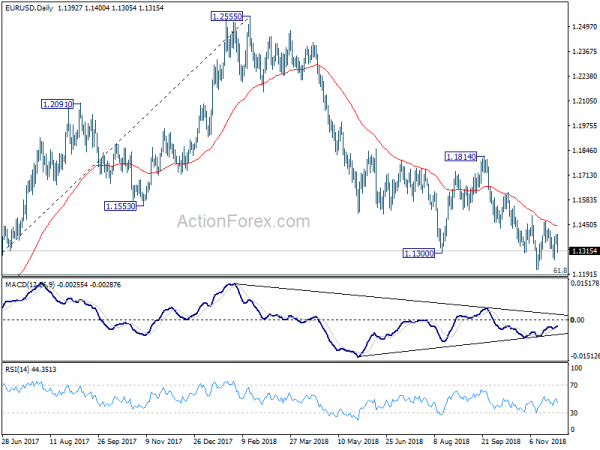 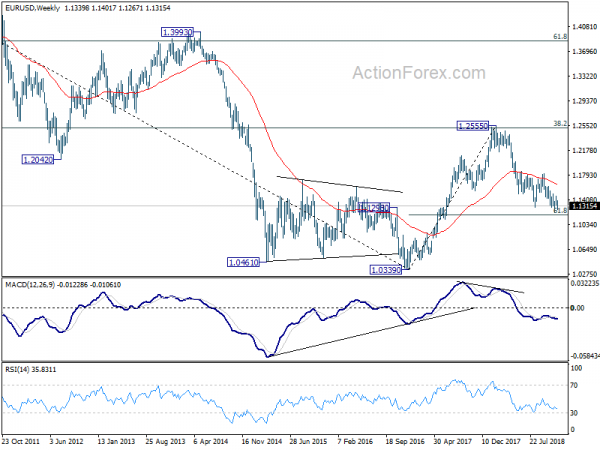 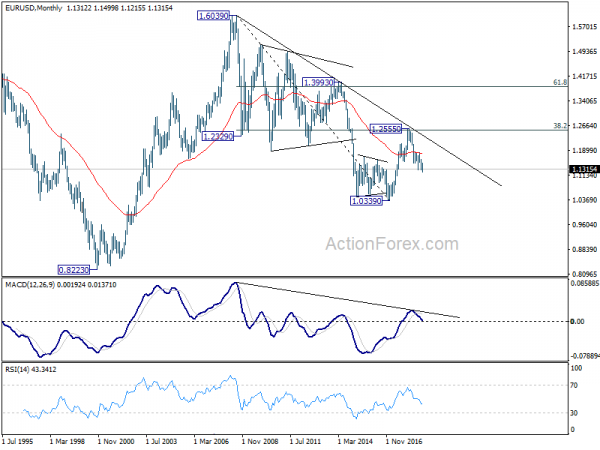