Trade talk optimism, trade pessimism, drove markets up and down last week. In the end, Presidents of US and China decided to give markets some lip service and boosted stocks towards weekly close. Words, rather than substance, are enough to make investors happy. Yen and Swiss Franc ended as the weakest ones on late rally in stocks. Sterling followed as the third weakest for the week, as Brexit impasse continued. But strong retail sales from UK did give the Pound a mild lift.

On the other hand, commodity currencies made a strong come back. New Zealand Dollar ended as strongest as RBNZ did nothing to endorse market views that next move is a cut. Australian Dollar followed as second with help from the impression that US and China will finally make a trade deal. But the Aussie is set to face a string of tests in RBA minutes, wage price and employment data this week. Canadian Dollar was pulled up to third place by rallying oil prices, with WTI crude oil ended above 56 handle.

US-China trade talks made unknown progress, to be continued in Washington

Specifics were virtually non-existent regarding the week-long US-China trade negotiations in Beijing. But markets nevertheless cheered positive words from both sides. Trump hailed that the talks was “going extremely well” and “we’re a lot closer than we ever were in this country with having a real trade deal”. He even offered that “it would be my honor to remove” the tariffs if they cane make the deal.

On the rumor of 60-day extension to the March 1 trade truce deadline, Trump said “there is a possibility that I will extend the date. But if I do that – if I see that we’re close to a deal or the deal is going in the right direction – I would do that at the same tariffs that we’re charging now, I would not increase the tariffs.”

White House also issued a statement regrading the meetings in Beijing. It’s noted that “These detailed and intensive discussions led to progress between the two parties… Both sides will continue working on all outstanding issues in advance of the March 1, 2019, deadline…  United States and Chinese officials have agreed that any commitments will be stated in a Memoranda of Understanding between the two countries.”.

According to a statement published by China Daily, “Both sides reached consensus in principle on major issues and had specific discussions about a memorandum of understanding on bilateral economic and trade issues… The two sides said they will step up their work within the time limit for consultations set by both heads of state, and strive for consensus.”

Now, both team will meet again in Washington this week (starting Feb 18), at both ministerial and vice-ministerial levels. Focus will be on whether they could really deliver a certain MOU.

Fed might stand pat through 2019, or maybe just one hike

The shockingly poor US December retail sales, which released was delayed due to government shutdown, was more than enough to offset the positive impact from higher than expected January inflation reading. Headline sales dropped -1.2% mom while ex-auto sales decreased -1.8%. That was the worse contraction in nine years since 2009. The data prompted Atlanta Fed to slash its Q4 GDP estimate by -1.2% to just 1.5%, less than half of Q3’s 3.4%. Later in the week, New York Fed also halved Q1’s GDP forecast to 1.08%, from 2.17% just a week ago.

Fed officials generally played down the importance of just one month of data. But they’re firmer than ever of their “patient” stance regarding monetary policy. San Francisco Fed President Mary Daly said “the case for a rate increase isn’t there for 2019, if  the economy evolves as I just said I expect it to, 2 percent growth, 1.9 percent inflation, no sense that (price pressures are) going up, no sense that we have any acceleration.”

Fed Governor Lael Brainard warned that “downside risks have definitely increased relative to that modal outlook for continued solid growth.” And, on monetary policy, she’s “comfortable waiting and learning” and the current policy is “in a good place”. And, she would weigh “what move, if any, later in the year”. Atlanta Fed President Raphael Bostic though, said his’ outlook for 2019 is “still above trend” at around 2.3 to 2.5% growth. Fed will still likely need to raise interest rates once this year.

We entered AUD/JPY short at 78.40 last week as last updated here. The rebound to 79.24 was firstly stronger than expected. And sequent fall, which was contained at 78.09 as supported by risk appetite, was also quite disappointing. 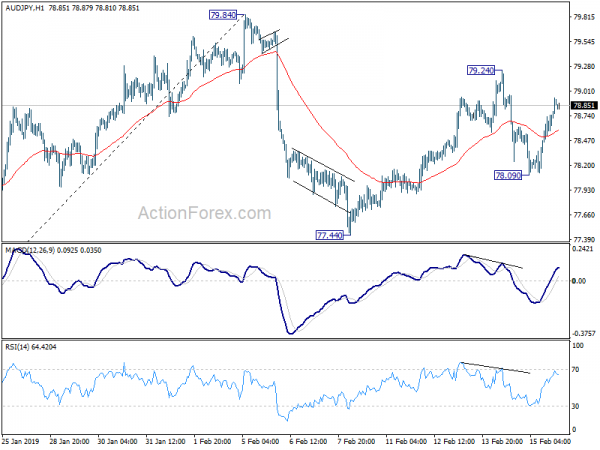 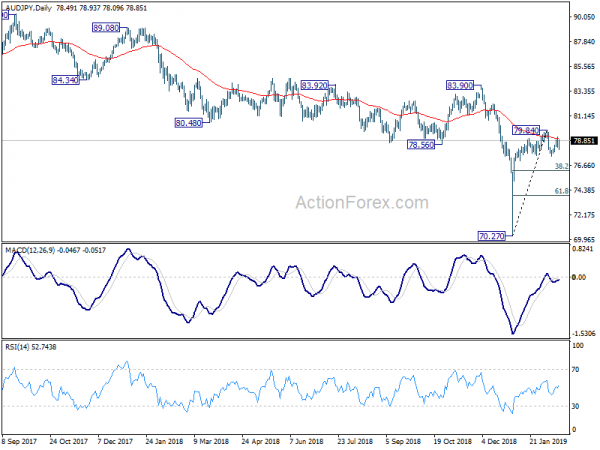 USD/CAD edged higher to 1.3340 last week but failed to break through 1.3375 resistance and retreated. Initial bias remains neutral this week first and some more consolidation could be seen. For now, further rise is in favor as long as 1.3196 minor support holds. We’re favoring the case that decline from 1.3664 has completed with three waves down to 1.3068 already, on bullish convergence condition in 4 hour MACD, just ahead of medium term channel support. Decisive break of 1.3375 resistance will confirm this bullish case and target a test on 1.3664 high. However, break of 1.3196 will now dampen our view and turn bias back to the downside for 1.3068 support instead. 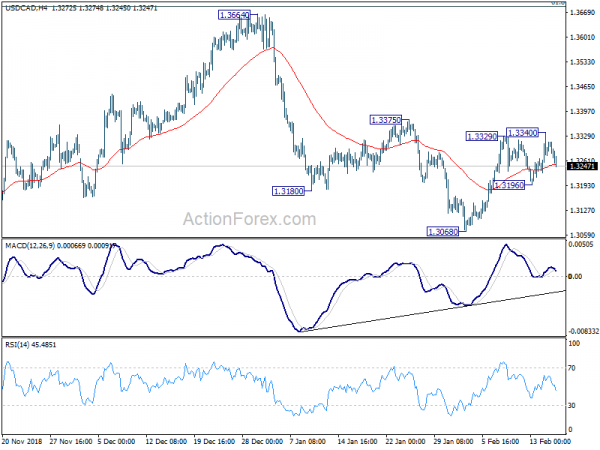 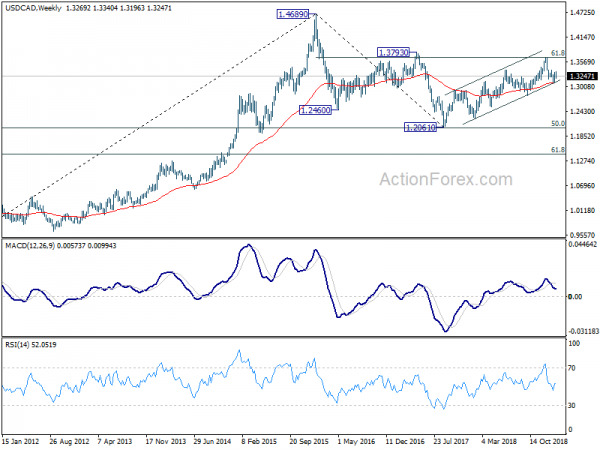 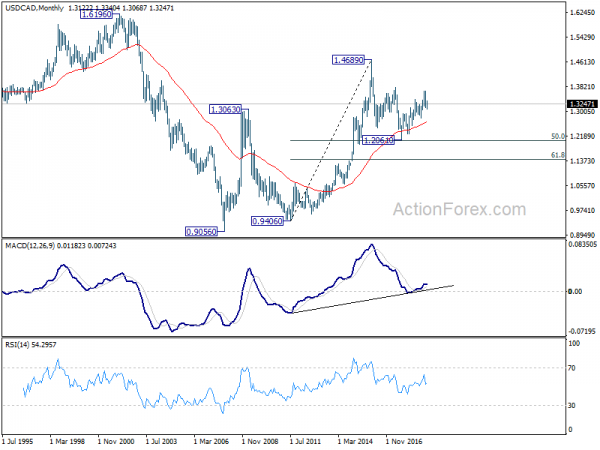