Dollar Dived on New Fed Strategy, Aussie Shone ahead of a Key Week

Dollar tumbled sharply, and broadly last week as markets perceive Fed’s adoption of average inflation targeting as a dovish move. Nevertheless, selloff were mainly against commodity currencies and, to a lesser extent, Sterling. The greenback ended in range against Euro, Swiss Franc and Gold. Even Gold just gyrated inside recently established range. Yen had every reason to underperform Dollar. But it rebounded on news of Prime Minister Shinzo Abe’s resignation and closed as second weakest only.

New Zealand Dollar might have ended as the strongest one. But that was mainly thanks to the pull back in AUD/NZD after a few week’s of strong rally. Australian Dollar was the indeed the best performing considering all factors. Such strength will face the test of a string of events this week including RBA. Canadian Dollar somewhat struggled mildly as WTI crude oil struggled to find follow through buying above 43 handle. 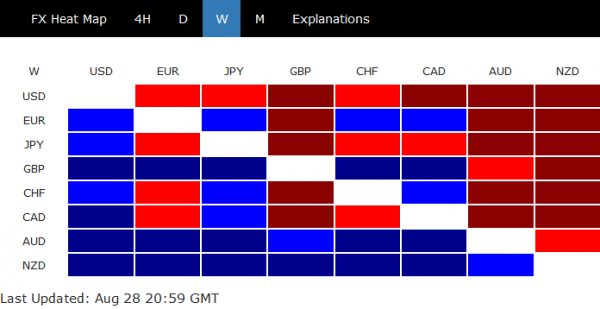 At the annual Jackson Hole Symposium, Fed Chair Powell briefed the market on the results of the Fed’s strategic review of its monetary policy strategy. Powell announced the new approach to deal with price stability and maximum employment, the dual mandate of the Fed monetary policy.

S&P 500 and NASDAQ surged to new record highs after the announcement and closed strongly. DOW was also catching up. As long as 27526.25 support holds, near term outlook in DOW will stay bullish. Retest of 29568.57 record high should be seen soon. 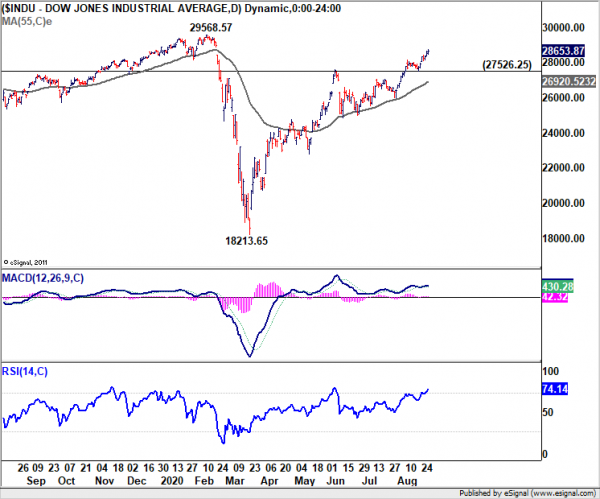 Strong rally was also seen in treasury yield at the long end. In particular, 30-year yield extended the rebound from 1.165, after drawing notably support from 55 day EMA. Further rise should now be seen to retest June’s key resistance of 1.761. We don’t expect a break there yet, however, at least until we’re seeing the end of the coronavirus pandemic. 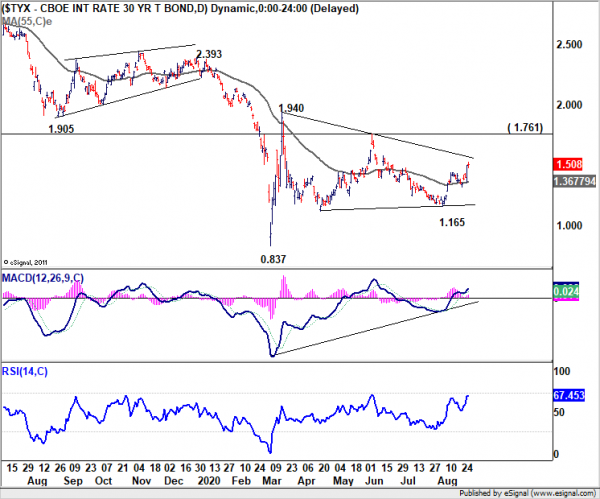 Nevertheless, the yield curve haven’t been such healthy-looking for some time. 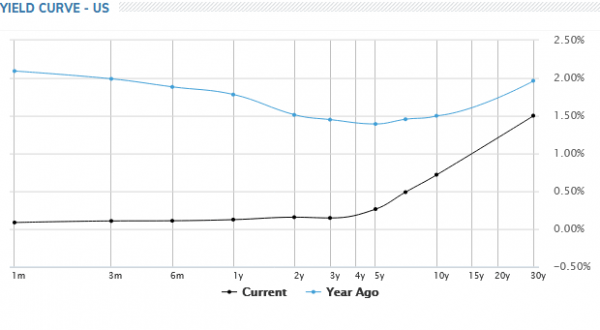 Dollar selloff not reflected in DXY and Gold

While Dollar was sold off broadly last week, the selling was mainly centered against commodity currencies, and to a lesser extend Sterling. EUR/USD, USD/CHF and USD/JPY were indeed staying in familiar range. Such development is reflected in Dollar index too, as it stayed in range above 92.12. Still near term outlook remains clearly bearish as further fall is expected with 93.99 resistance intact, to 161.8% projection of 100.55 to 95.71 from 97.80 at 89.96. 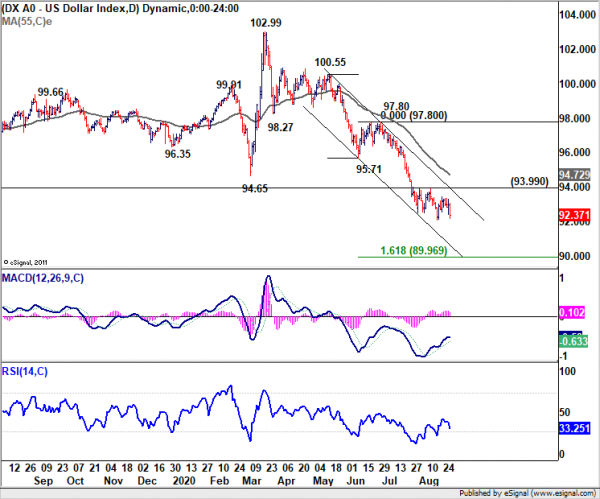 Reactions from Gold were also rather mild, despite some jitters. It’s staying in the consolidation pattern from 2075.18, which should extend for a while. While a break of 2015.66 resistance might be seen, we’d not expecting a new high above 2075.18 in the near term. Break of 1902.73 will instead bring another test on 1862.55 support. 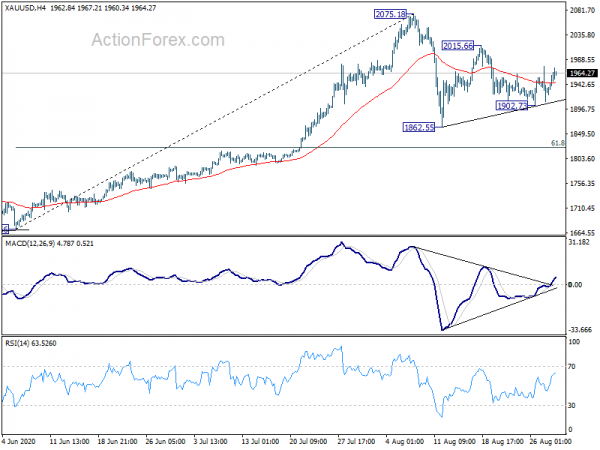 Australian Dollar powered up ahead of a key week

Talking about commodity currencies, Australian Dollar is the strongest one overwhelmingly. AUD/CAD drew strong support from 55 day EMA. Last week’s rally suggests that larger rise from 0.8066 might be ready to resume soon. The developments further affirm that whole down trend from 1.0784 (2012 high) has completed with three waves down to 0.8066. Sustained trading above 61.8% retracement of 1.0784 to 0.8066 at 0.9746 should at least bring a test on 1.0241 structural resistance. 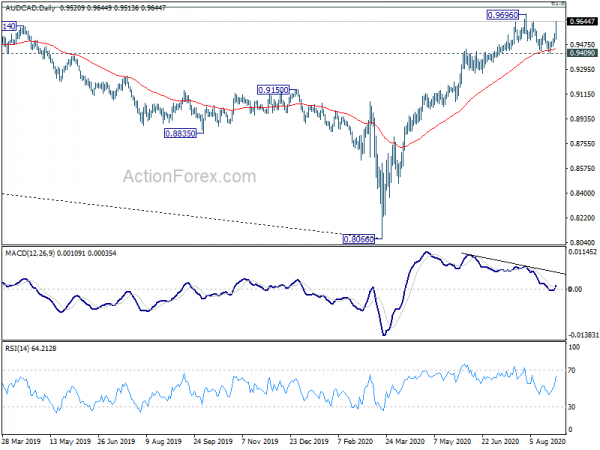 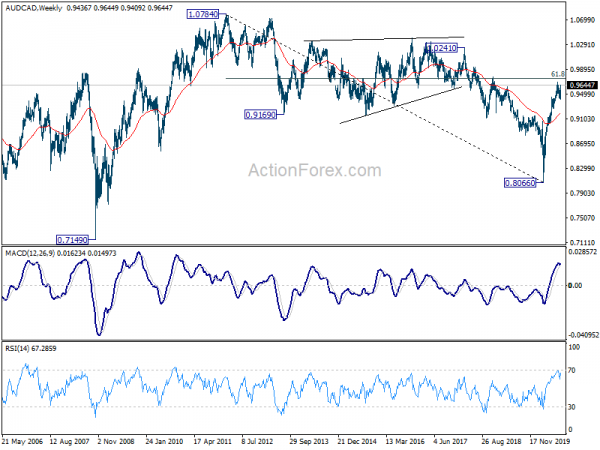 AUDJPY broke out of triangle consolidation to resume the rally from 59.89. While we’d stay cautious on sharp reversal following a terminal thrust out of triangles, near term bullish will remain safe as long as 76.78 resistance turned support holds. AUD/JPY be heading to long term channel resistance at around 80.06. 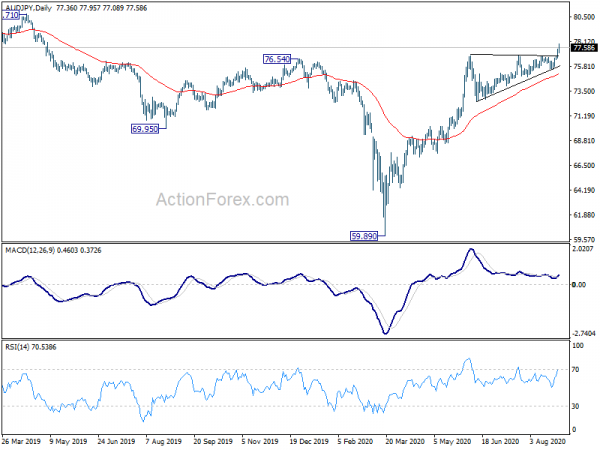 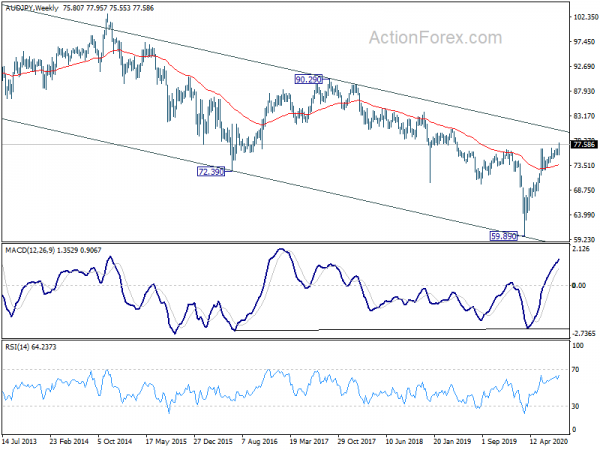 One factor that counters the argument of all-out Aussie strength is the lack of rise in All Ordinaries index, which correlates rather well with AUD/JPY. There are a number of key events in Australia this week, including RBA meeting, Q2 GDP, trade balance and retail sales. We’d soon find out if Aussie’ rally is there to stay for longer. (Suggested reading on RBA too: RBA Preview – Keeping Expansionary Policy Stance with Focus on 3-Year Yield). 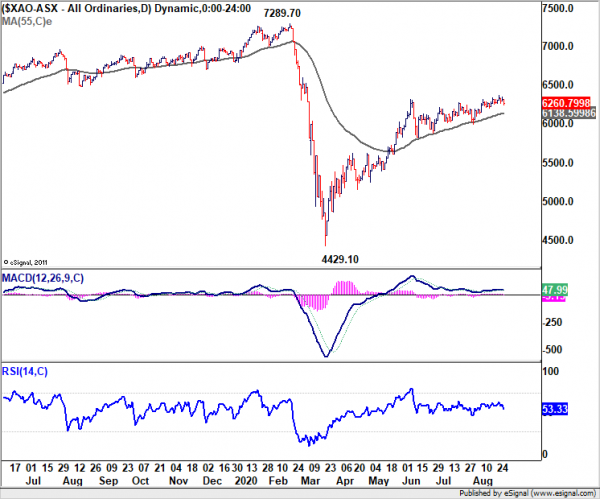 USD/CHF stayed in consolidation above 0.9009 last week and outlook is unchanged. Initial bias remains neutral this week first. As long as 0.9197 resistance holds, outlook remains bearish for further fall. Break of 0.9009 will resume larger down trend for 100% projection of 1.0237 to 0.9181 from 0.9901 at 0.8845. On the upside, though, break of 0.9197 resistance will indicate short term bottoming and bring stronger rebound. 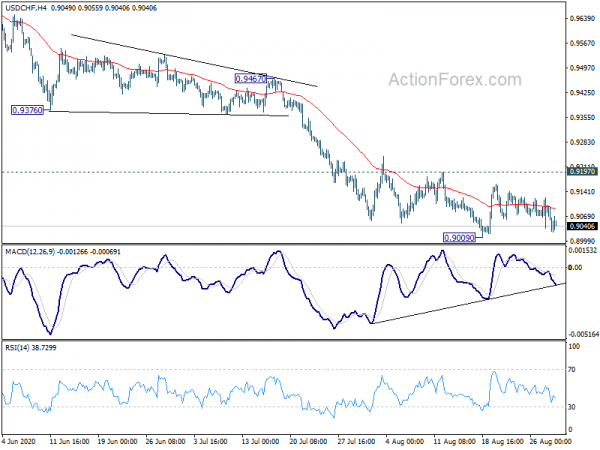 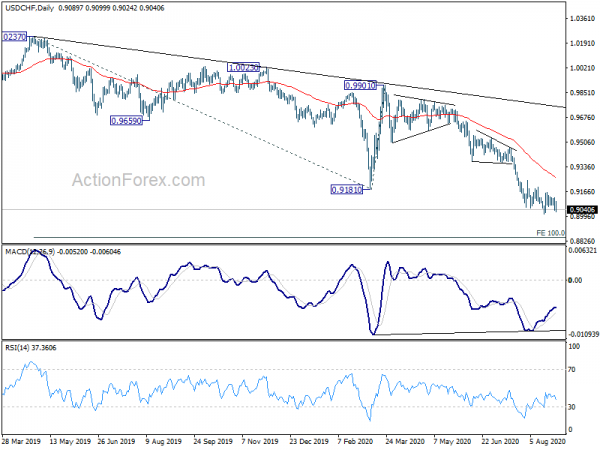 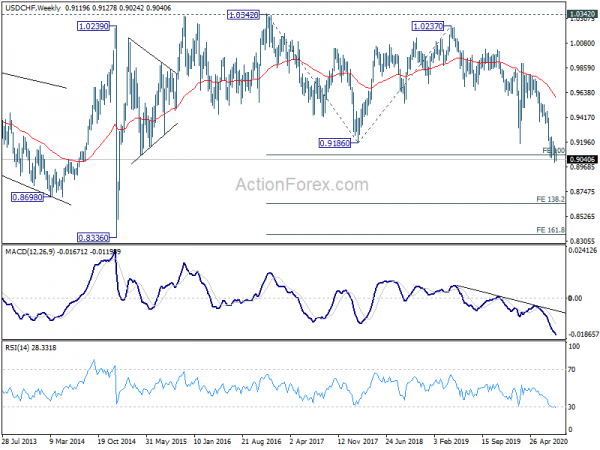 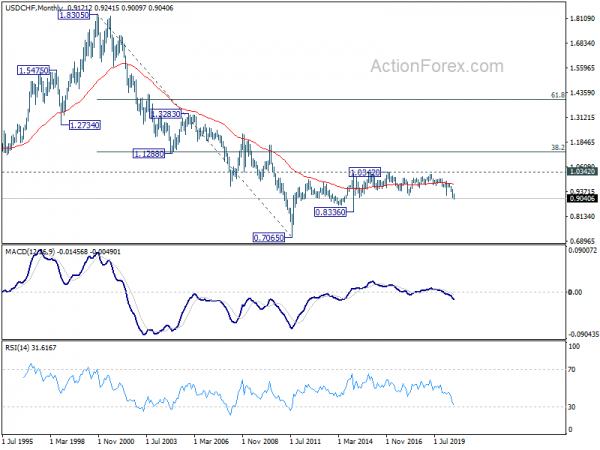