Overall market sentiments deteriorated notably last week, with concerns over the swift spread of Delta variant and return to lockdowns, Fed’s tapering and slowdown in China. A softening tone from a Fed hawk on tapering gave sentiment a late lift, but it remained to bee seen if that could last. Dollar ended as the strongest one, followed by Swiss Franc and Yen. But the three winners were actually very close with respect pairs staying in range only.

On the other hand, commodity currencies were under extremely heavy selling. Aussie was the worst as pressured by free fall in iron ore price and tougher pandemic restrictions. Kiwi followed as RBNZ changed their mind by keeping interest rate unchanged, as New Zealand returned to lockdown too. Canadian Dollar was dragged by extended correction in oil price. Jackson Hole Symposium is unlikely to be inspiration this week. Focus will remain on the virus, as well as overall risk market developments.

US stocks resilient as Fed hawks could adjust their tapering plan

US stocks displayed a lot of resilience last week as major indexes struck a sizeable rebound after initial selloff. On the one hand, the spread of Delta variant prompted some worries that the economic impact is going to last longer. Yet, sentiment was somewhat lifted as a known hawk in Fed indicated that he could be changing his mind on the timing of tapering.

Dallas Fed President Rob Kaplan had been clear that he’d prefer announcing the plan in September and then start tapering in October. But on Friday, he said he’s “watching very carefully” how the Delta would impact the economy, and he’d ready to “adjust” his views on policy somewhat. It’s not getting even more unlikely for Fed chair Jerome Powell to indicate anything concrete regarding tapering in the Jackson Hole Symposium this week. Indeed, we might hear more Fed hawks turning cautious if the situation worsen.

DOW recovered after hitting as low as 34690.3 and drew support from 55 day EMA, to close at 35120.1. Upside momentum weakened apparently as seen in daily MACD. Yet, there is no confirmed topping yet. The up trend is still in favor to extend to 61.8% projection of 26143.77 to 35091.56 at 37159.80. However, considering the possibility of bearish divergence condition in daily MACD, sustained trading below the 55 day EMA would raise the chance of a medium term correction, and turn focus to 33741.76 support for confirmation. 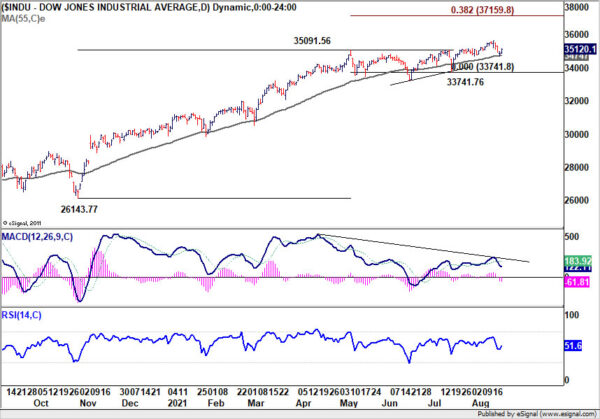 The picture in Asia, however, is much worse. Infections in Japan skyrocketed after the Olympics even though death tolls remained relatively low. Seven more prefectures declared state of emergency last week while the National Governors’ Association urged the government to imposing stricter lockdown.

Nikkei dropped through a key support level at 37385 finally, resuming the choppy fall form 30714.52. Such decline should be correcting the whole up trend from 16378.9. A main point to watch is whether there would be downside acceleration through falling channel support. But still, deeper decline to 38.2% retracement of 16378.9 to 30714.52 at 25238.3 is likely before the correction completes. 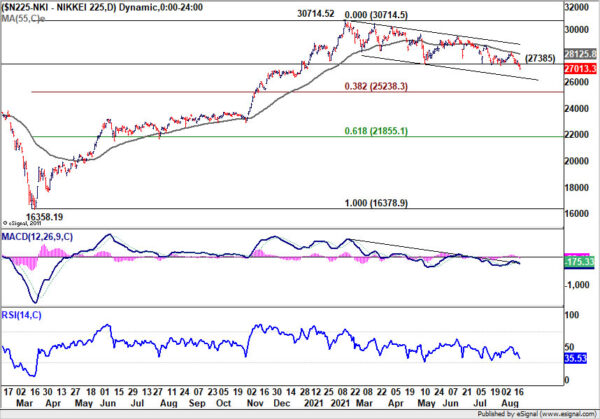 The set of data released from China last week also triggered some concerns over a serious slowdown in the second half. The aftermath of the massive flood in central Henan province is not reflected in the data yet. Additionally, return of the coronavirus to the country could drag the economy down. At the same time, the grip on sectors like tech, gaming, private eduction and real estate continued to tighten. It’s uncertain who would be the next target. 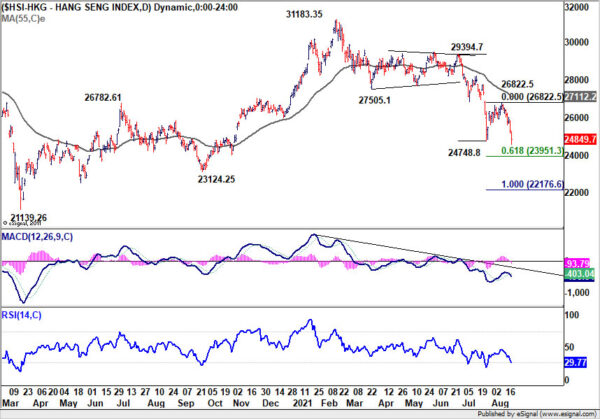 Talking about China, iron ore prices’s free fall continued last week on concerns over the decline in the country’s demand. The contraction was seen as a result of renewed pandemic restrictions, as well as weaker conditions in the property and infrastructure, which leads to reduced steel output cuts in the second half. Also, the China Iron an Steel Association has proposed limiting steel exports and cutting shipments of lower-grade products. 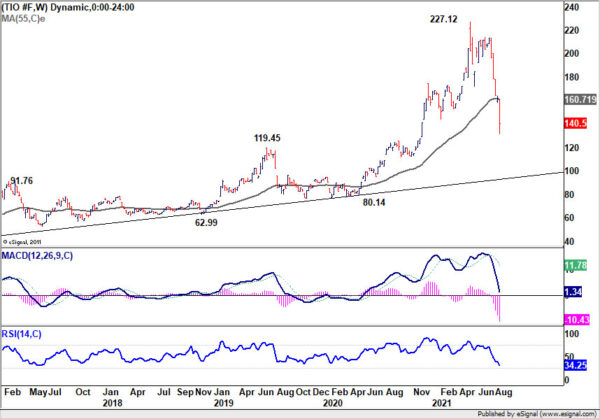 The fall in iron ore price put additional weight on Aussie, which was already pressured by return to tough lockdowns and spread of Delta. It’s getting more inevitable for RBA to delay tapering of asset purchases from the September schedule. Or, if situation in New South Wales worsens, RBA could indeed reverse and raise the target of asset purchases.

AUD/JPY’s fall from 85.78 resumed last week, and dived through 55 week EMA, hitting as low as 77.88. Such decline is seen as correcting whole up trend from 59.85. It a bit early to predict the eventual depth of the correction. But we’d look for support from 38.2% retracement of 59.85 to 85.78 at 75.87 to bring rebound, at least on first attempt. Nevertheless, firm break of 79.82 support turned resistance is needed to be the first sign of bottoming, or near term outlook will stay bearish for now. 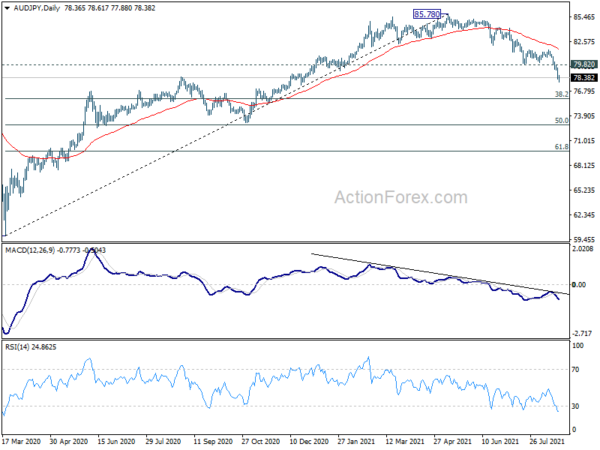 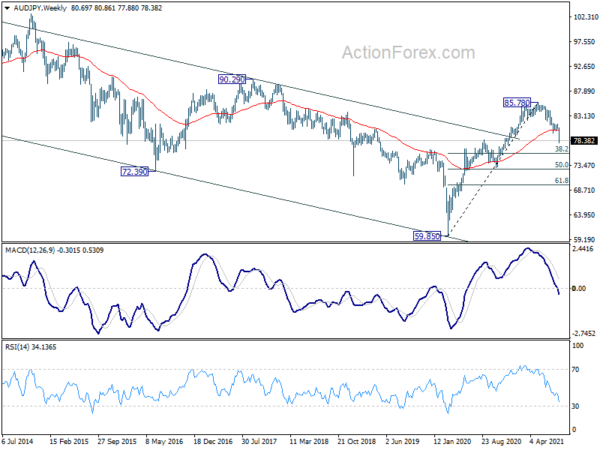 Meanwhile, Canadian Dollar was also dragged down by extended selloff in oil price. The decline is WTI crude oil was not unexpected, as corrective pattern from 76.89 extended. While further fall is in favor, we’d tentatively look for strong support from 38.2% retracement of 33.64 to 76.98 at 60.42 (i.e., close to 60 handle) to contain downside to bring rebound. However, sustained break there would probably bring even deeper correction to 61.8% retracement at 50.19, which is close to 50 handle. 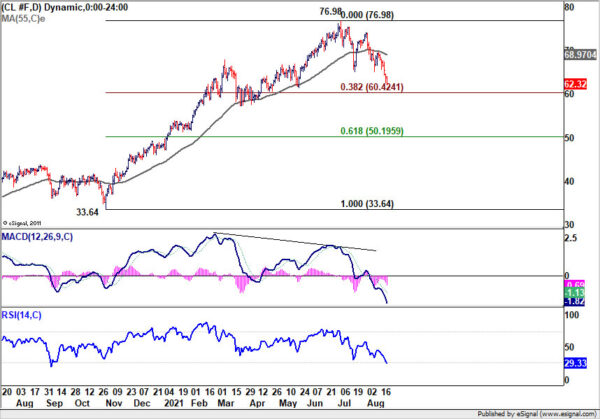 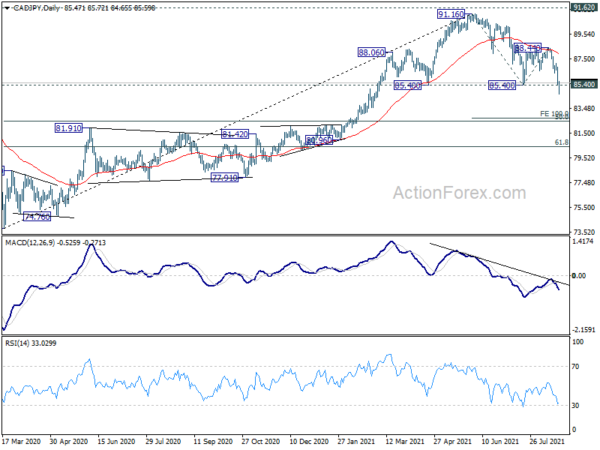 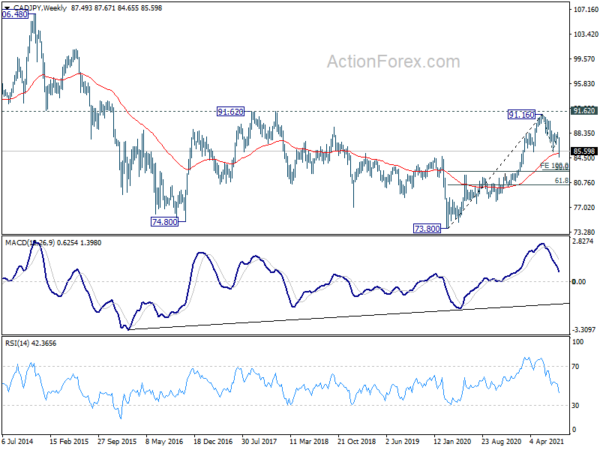 The fibonacci level at 94.46 will be important to determine the underlying trend. Strong break there would indicate that DXY is already in a medium term up trend, that would extend through 61.8% retracement at 97.72. However, failure there and (early) break of 92.47 support could bring another attempt below 90 handle before taking a committed direction. 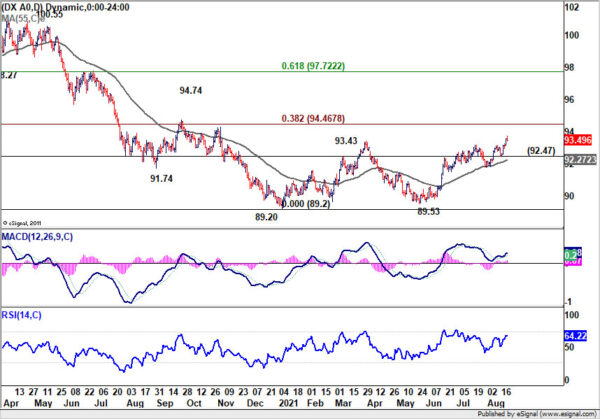 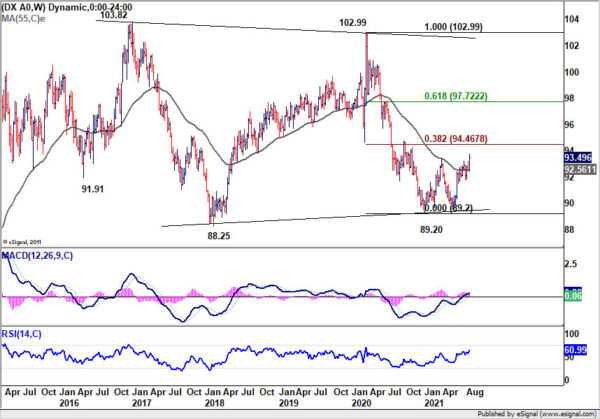 USD/CHF stayed in established range last week and near term outlook is mixed. Initial bias remains neutral this week first. On the upside, break of 0.9241 resistance should resume the rise from 0.8925 through 0.9273. On the downside, break of 0.9098 will target 0.9017 support first. Further break there will likely resume the decline from 0.9471 through 0.8925 low.

In the bigger picture, the failure to sustain above 55 week EMA (now at 0.9180) retains medium term bearishness in USD/CHF. Break of 0.8925 support should resume the whole decline form 1.0342 (2016 high) through 0.8756 low. However, break of 0.9273 resistance and sustained trading above 55 week EMA will be an early sign of bullish trend reversal. Focus will then turn to 0.9471 resistance for confirmation. 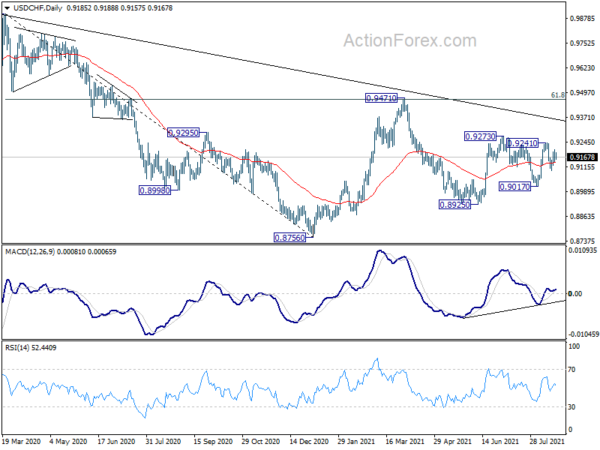 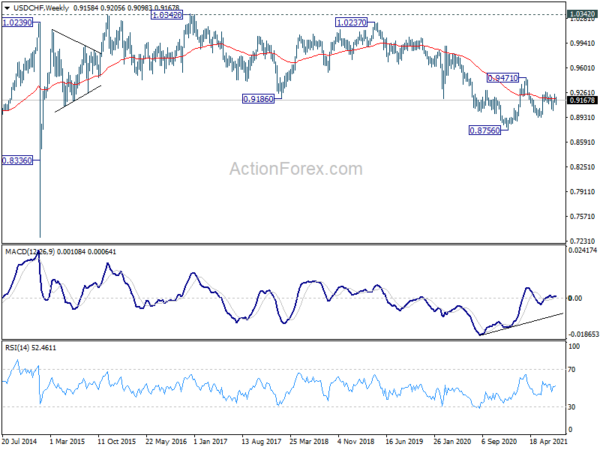 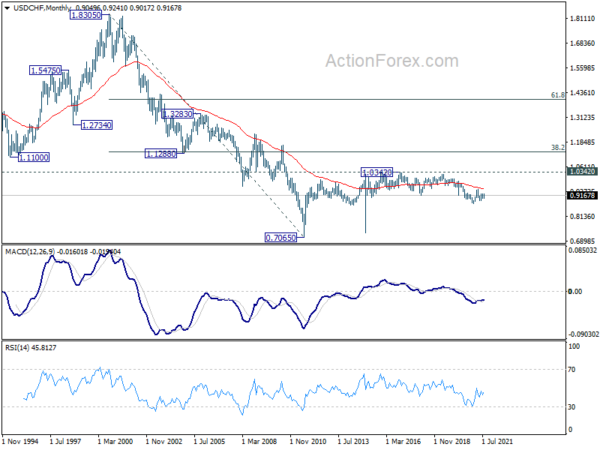