The markets have turned a bit mixed last week and have likely entered into a near term consolidative mode already. Dollar ended broadly lower even though traders continued to add their bet on a Fed rate hike next year. Indeed, the odds for a hike by June is now higher than not. Canadian Dollar was worse despite oil’s persistent strength.

Yen was recovering while Swiss Franc strengthened with rising treasury yields in the background. Germany 10-year yield hit at -0.1% finally and Japan 10-year JGB yield was on track to 0.1% handle. US stocks also hit new record highs, even though the breakouts weren’t clean. New Zealand Dollar was the strongest on increasing expectation of another imminent RBNZ hike, but buying didn’t follow through.

Overall, comments from Fed officials last week further confirmed that tapering is on the way to be announced in November. While it’s not time for interest rate hike yet, there are increasing concerns that supply bottlenecks and high inflation is going to last longer. Hence, Fed could pull ahead a rate hike earlier.

In particular, Fed Chair Jerome Powell indicated on Friday, “the risks are clearly now to longer and more persistent bottlenecks and, thus, to higher inflation”. He pointed out, “our policy is well positioned to manage a range of plausible outcomes. We need to watch, and watch carefully, and see if the economy is evolving consistent with our expectations, and adapt policy accordingly.” That is seen by the markets as opening the door for an early rate hike.

According to fed fund futures, traders are now pricing in only 38% chance of federal funds rate staying at 0-0.25% by June next year. That is, there is 62% chance of a hike by then, comparing to less than 20% a month a ago. 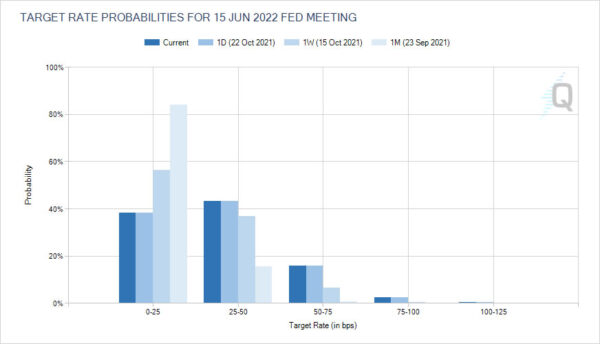 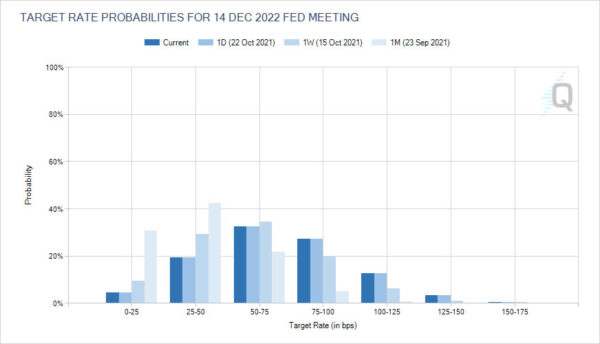 Both DOW and S&P 500 eked out new record highs last week but the breakouts were not too convincing yet. Nevertheless, near term outlook in DOW should stay bullish as long as 55 day EMA (now at 34827.37) holds. Next near term target will be 38.2% projection of 26143.77 to 35091.56 from 33613.03 at 37031.08. Firm break there should secure medium term upside momentum. Such development, together with rising yields and increasing expectation of Fed hike, would be rather bullish. 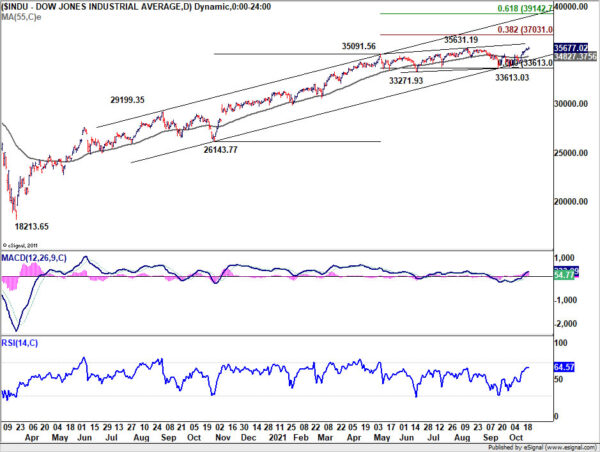 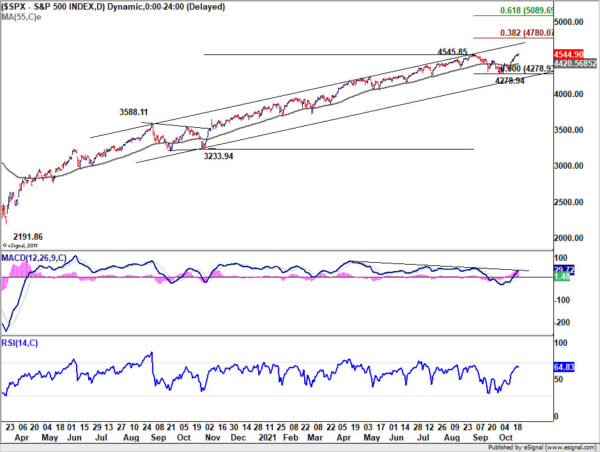 10-year yield’s rally continued last week to close at 1.655. But further rise would remain in favor as long as 1.507 support holds, to retest 1.765 high. At this point, upside momentum as indicated in daily MACD is just steady, and doesn’t warrant a decisive break there. The development could firstly cap Dollar’s rebound and secondly, slow Yen’s selloff. In particular USD/JPY would need a firm break of 1.765 in TNX to aid it through 115 handle. 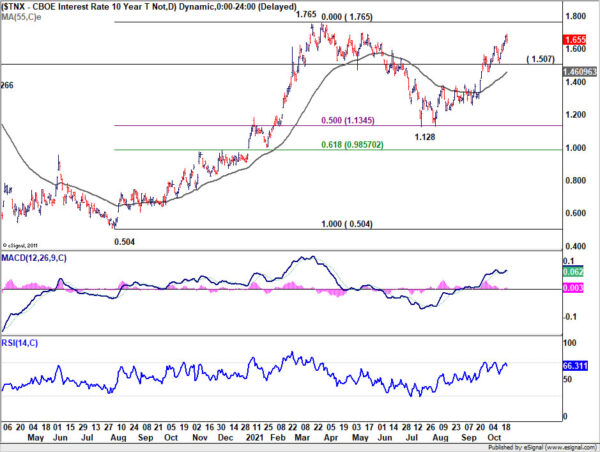 Dollar index extending pull back from 94.56

Dollar index extended the pull back from 94.56 in spite of rising yields and increasing expectation of Fed hike next year. As long as 55 day EMA (now at 93.30) holds, recent rise form 89.53 is still in favor to continue. Yet, 38.2% retracement 102.99 to 89.20 at 94.46 will remain a key hurdle to overcome, unless TNX could break through 1.765 high. Meanwhile, firm break of the 55 day EMA will suggest that Dollar’s weakness is spreading from against commodity currencies to against everyone. 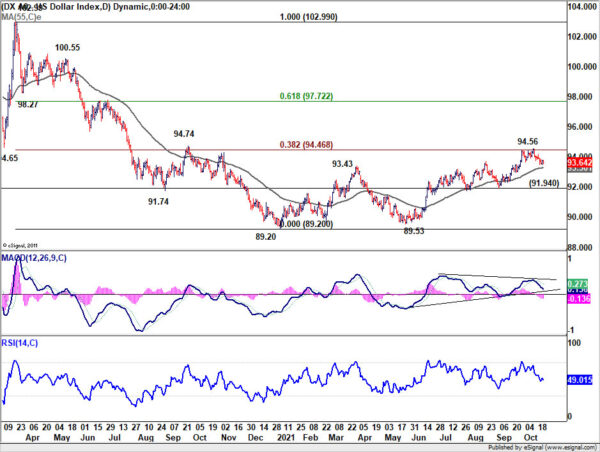 Bitcoin surged to new record high at 66982 last week but lost momentum since then. Considering bearish divergence condition in 4 hour MACD, a short term top should be formed and some more consolidations should follow in the near term. Though, we’d expect strong support from 38.2% retracement of 39559 to 66982 at 56506 to contain downside and bring rebound. And upside breakout is expected later to 161.8% projection of 29261 to 52922 from 39559 at 77842. 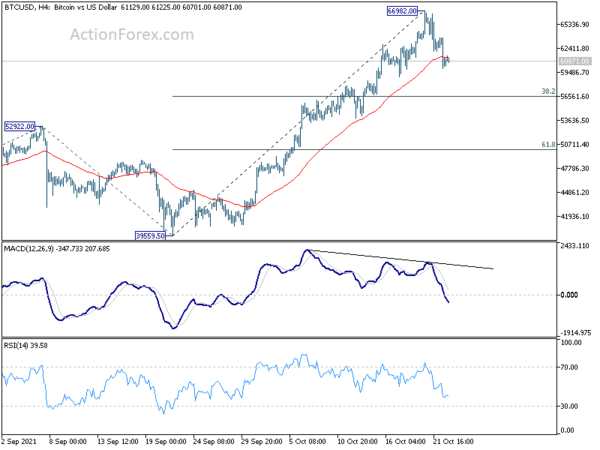 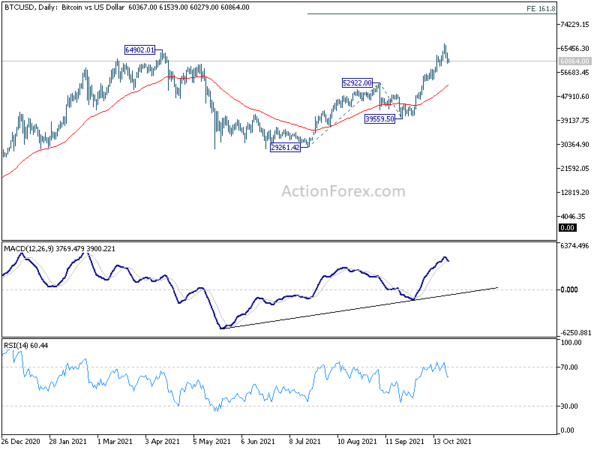 USD/CHF’s fall from 0.9367 extended lower last week. The development now suggest that rebound form 0.8925 has completed with three waves up to 0.9367, on bearish divergence condition in daily MACD. Initial bias remains on the downside this week for 0.9017 support first. Break will target 0.8925 next. On the upside, however, break of 0.9251 minor resistance will turn bias back to the upside for retesting 0.9367 instead. 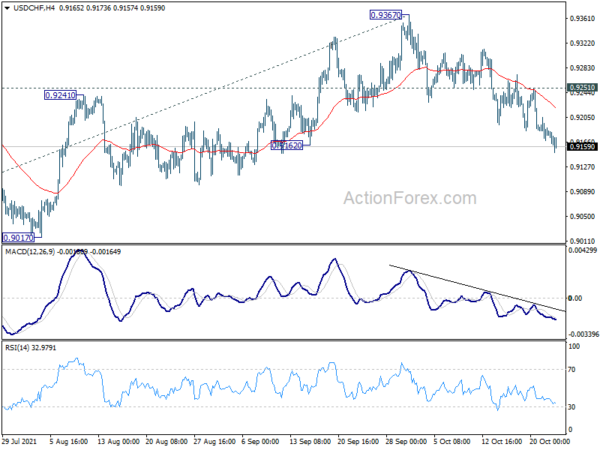 In the bigger picture, the corrective structure of the rebound from 0.8925 argues that fall from 0.9471 is not completed yet. It could either be the second leg of pattern from 0.8756 (2021 low), or resuming larger down trend from 1.0237 (2018 high). We’d pay attention to the downside momentum and assess the odds later. But for now, medium term outlook will be neutral at best as long as 0.9471 resistance holds. 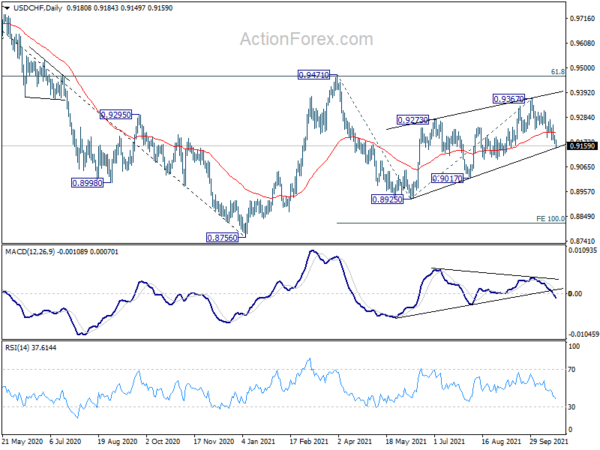 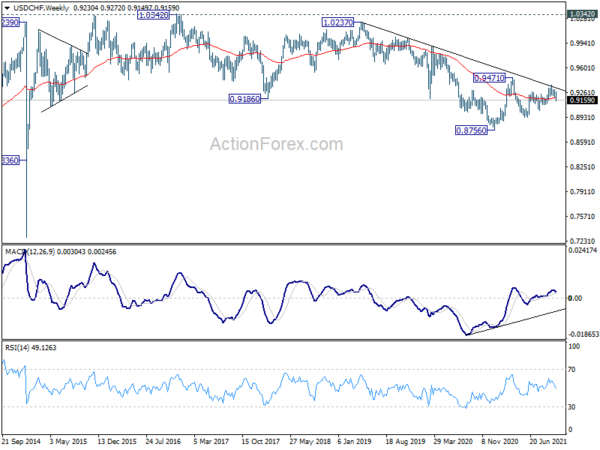 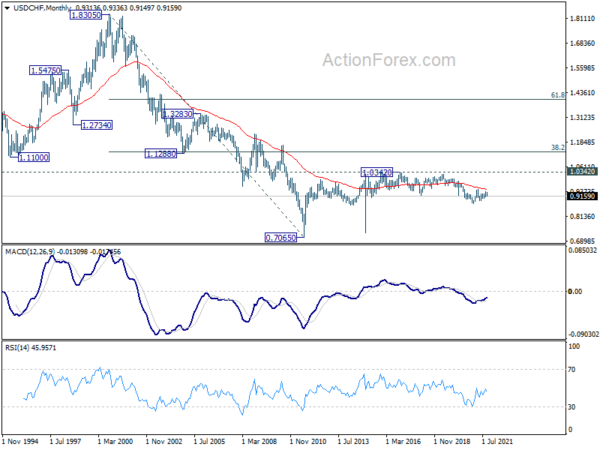