Action Forex
HomeMarket OverviewWeekly ReportDollar Dominated the Markets as Treasury Yields Could be Reversing Multi-Decade Down...

Dollar ended broadly higher last week as boosted by surge in treasury yields. 10 year yield finally completed its consolidation that started back in February, and rose through 2.943 high to close strongly at 2.951. That came with the background that recent comments from Fed officials affirmed its gradual tightening path. In addition, Fed will continue to unwind its treasury holdings this year, and the US government will need to issue more debts to fund its spending. Another key development to note is that spread between 2 year note and 10 year note widened back to about 0.5% and eased some concerns over flattening or even inverted yield curve. US equities, on the other hand, reversed almost all of its earlier gains and closed just marginally higher.

The strength in US Dollar was also helped by weakness in others. Sterling was pressured after triple data misses including wage growth, CPI and retail sales. But it was BoE Governor Mark Carney’s comment that accelerated the selloff. In short, Carney acknowledged weakness in recent data and pointed out that there are other BoE meetings ahead in addition to May. Now that after the week, the case of two hikes by BoE this year, one in May and another one in November is very stretched. And even a May hike is back on the table as BoE could wait a bit longer before acting.

Such development regarding BoE hike was reflected in the late selloff in the Pound, which ended as the second weakest one for the week after New Zealand Dollar. It’s also reflected in the strength of FTSE which extended the rebound from 6866.93 to close at 7368.17. It’s clearly decoupled from US stocks. FTSE is now expected to rise further to 61.8% retracement of 7792.56 to 6866.93 at 7438.96 and above. This will be the favored case as long as 7189.85 support holds.

Euro resislient on cross buying, but vulnerable on data and ECB

Euro, on the other hand, was very resilient even though data continued to point to slower growth in the region. The ECB seemed to have done a much better job in managing market expectations. The markets are still debating whether it would stop, taper, or extend the asset purchase program after September. Unlike the BoE, there was no sharp change in the policy path expectations. Additionally, Euro was firstly supported by cross buying from Swiss Franc, and then from Sterling.

The weakness in Swiss Franc and strength in Yen argued that safe haven out flow mainly happened in Europe. That was of course also reflected in European stocks too. For example, CAC’s strong rally now put focus back to 5567.08 high for the near term. However, firstly, EUR/CHF’s up trend is now looking a bit stretched after touching the historical 1.2 level. Eurozone PMIs to be released this week might continue to paint a less optimistic picture. And more importantly, ECB meeting this week could give the markets a dose of dovish flavor. Hence, Euro might be vulnerable to deeper selloff against Dollar and Yen ahead.

Canadian Dollar also suffered much selling pressure as BoC delivered a much less hawkish than expected statement after keeping interest rate unchanged at 1.25%. The central bank even revised lower 2018 growth forecast by -0.2 percentage point, to 2% for this year. There is clearly no timeline for another rate hike. Selloff even came worse after both CPI and retail sales missed market expectations.

US yield could be reversing multi-decade down trend

Sustained break of 3.036 could also mean reversal of multi decade down trend in TNX. As seen in the monthly chart, that would be in form of double bottom (1.394, 1.336) on bullish convergence condition in monthly MACD. Of course, the falling channel resistance should be taken out too. And in that case, it would the mark of the end of an historical era of persistent decline in US benchmark yield.

Dollar index was held in range, due to Euro’s resilience. The strength in TNX now tilts favor to the case of upside breakout. That is, further rise in TNX would push DXY through long term falling trend line resistance and 91.01 key support turned resistance.

The coming two weeks, with ECB meeting on Apr 26, and non-farm payroll on May 4, could set the tone for the rest of the year. Sit tight.

GBP/USD edged higher to 1.4376 last week but reversed and dropped sharply to close at 1.3995. Initial bias remains on the downside this week for 1.3965 support first. Break there will pave the way to 1.3711 key support level. On the upside, above 1.4069 minor resistance will turn intraday bias neutral and bring consolidations. But for now, near term risk will stay on the downside as long as 4 hour 55 EMA (now at 1.4173 holds). 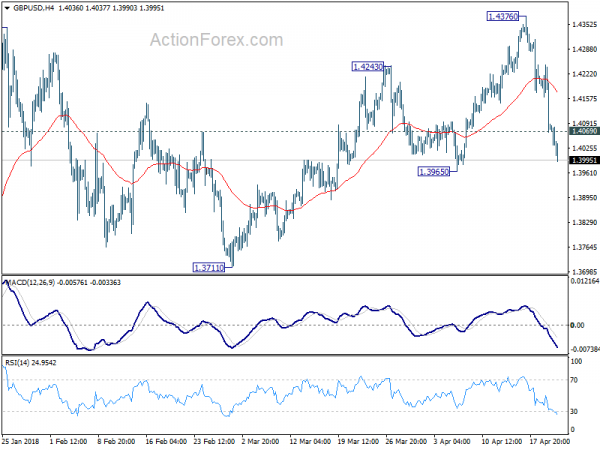 In the bigger picture, bearish divergence condition in daily MACD is raising the chance of medium term reversal. Also, note that GBP/USD has just failed to sustain above 55 month EMA (now at 1.4257). Focus is back on 1.3711 support. Firm break there will confirm medium term reversal and target 38.2% retracement of 1.1936 (2016 low) to 1.4376 at 1.3448 first. Break will target 61.8% retracement at 1.2874 and below. For now, sustained break of 55 month EMA is needed to confirm medium term upside momentum. Otherwise, we won’t turn bullish even in case of strong rebound. 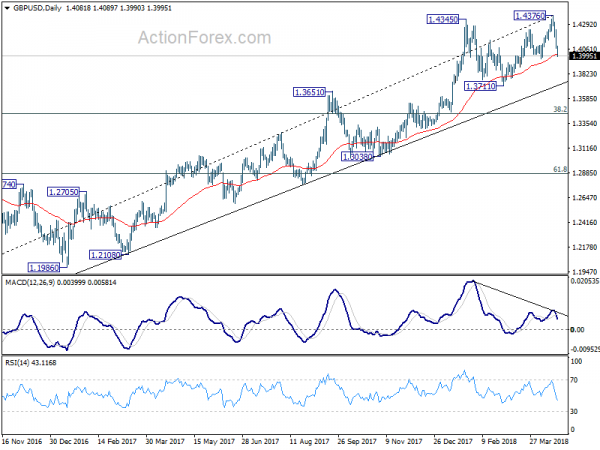 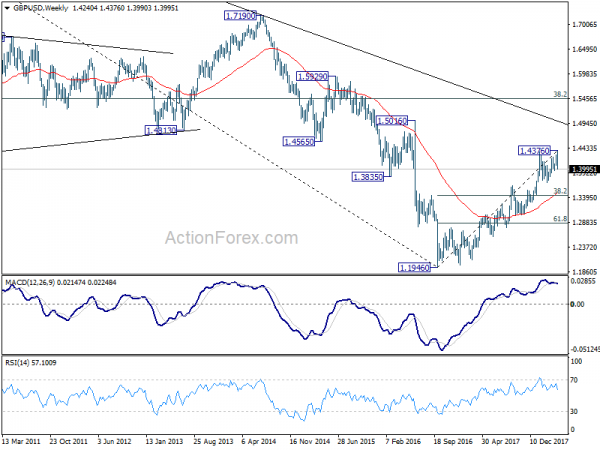 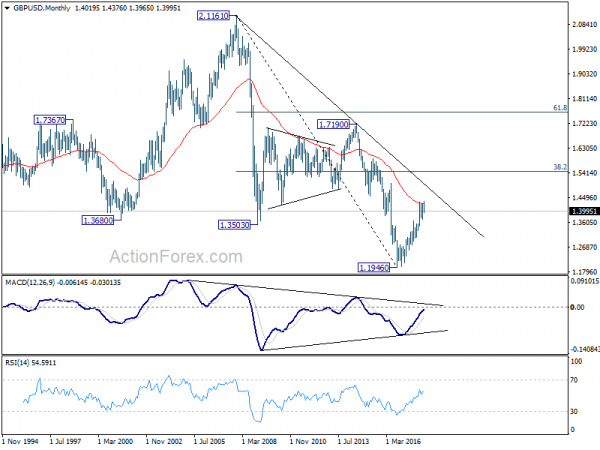