Since our last discussion in May, the financial situation in Argentina has not improved. Rather, it has deteriorated rapidly over the past few months. Last week, President Mauricio Macri announced that he had asked the IMF to accelerate disbursement of its 3-year stand-by loan worth of US$ 50B, after securing US$ 15B of funding in June.

The news sparked concerns over the country’s ability to refinance and repay its debts. Peso sank, tumbling -19% against USD, despite the world’s highest interest rate at 60%. Since the beginning of the year, Peso has halved its value against the greenback.

Many has associated the debt-ridden Argentina with Turkey. Yes, both are among the biggest emerging economies, experienced crises  and received IMF assistance back in early 2000s. Both both are debt-ridden and stricken by the collapse of market confidence in the current crisis. Yet, the two crises are not entirely the same.

On the economic front, inflation is high in both countries.

For Turkey, the latest figure shows that headline CPI has hit 18% y/y in August, from 17% in the prior month. 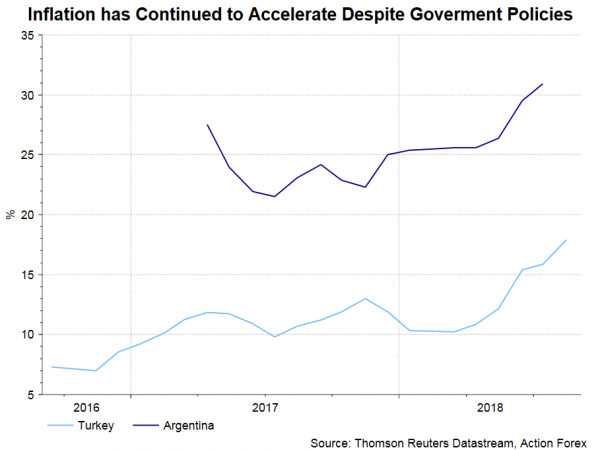 Both countries are struggling with high debts and are sensitive to foreign investments.

Argentina’s record high current account deficit has exceeded 5% of GDP and about 39% of the country’s total exports. It is estimated that the country’s primary fiscal deficit stands at 2.7% of GDP this year and 1.3% in 2019. The latest plan is to bring it to 0% by next year (previously by 2020). The country has been financing much of its fiscal deficit (3.9% of GDP in 2017) with FX-denominated public debt, which has taken up around 65% of the total. The government has determined to trim its fiscal deficit level, via a series of reforms including reduction in spending and tariff. The path could be challenging, in particular ahead of the general election next year.

Turkey’s current account deficit is about 7% of GDP, one of the largest among emerging markets.

Notwithstanding the painful experience back in 2001, it appears that Argentina is still willing to comply with IMF’s plan and implement austerity measures to lower deficit. As mentioned above, the government has pledged to eliminate deficit by 2019. Besides, it has planned to accelerate the stringent fiscal tightening measures including re-imposition of export tax and delay of planned tax cuts to soy exports and corporate profits. Government spending would also be reduced. Meanwhile, in order to rescue the currency from panic selling, the central bank has been responsive and adopted rate hikes several times this year.

On the contrary, declaring himself the “enemy of interest rate”, Turkish President Erdogan has refrained of raising interest rate since his re-election. The central bank, now controlled by Erdogan and his protégé, focused on injecting liquidity to the market – a tool that should send inflation higher. The government earlier this week pledged the revise the monetary policy later this month, with the market speculating that a rate hike might be implemented next week.

The trigger points for the recent crises are different.

For Argentina, the situation has deteriorated markedly after Macri surprisingly  announced in Youtube that he has requested the IMF to front-load the loans. This was accompanied with no statement from the IMF until some time later. IMF’s statement was vague itself, without guidance on the current situation of Argentina. We would say the problem of communication and the way Macri handled the situation have caused the deterioration of the situation.

In Turkey, the diplomatic dispute with the US was probably the last straw that. The major problem lies on Erdogan’s policies. No matter what the causes are, the underlying reason for the downward spiral to continue is the “crisis of confidence”. While it appears obvious that the top priority is to restore market confidence, finding a way out is no easy task.