Tuesday June 19: Five things the markets are talking about

The trade dispute between the two economic superpowers, U.S and China, is getting ugly very quickly and has triggered a global sell-off of riskier assets and flight toward safe haven assets. The fallout is pressuring global equities and providing support for U.S treasuries, gold and yen.

The move towards protectionism has rattled commodities and commodity-linked currencies like the AUD, CAD and NOK. Even emerging markets are taking a hit on the real possibility that a global trade war becomes a reality and not just tough talk.

Crude oil prices are also taking a hit, paring yesterday’s gain as the market weigh OPEC’s discussions on a compromise over increasing output ahead of this week’s key meeting in Vienna (June 22/23).

Asia equities fell to a new four-month low as President Trump raises the stakes in Sino-U.S trade war. Trump threatened yesterday to impose an additional +10% tariff on +$200B of Chinese goods, disobeying negotiation and consensus reached previously between the two countries. This has prompted a swift warning of retaliation from China.

In Japan, stocks plummeted to a three-week low overnight and posted the biggest daily percentage drop in three-months after Chinese equities were aggressively sold amidst escalating global trade struggles. The Nikkei share average ended -1.8% lower, while the broader Topix shred -1.6%.

Down-under, Aussie stocks bucked the trend and added +0.1%, helped by a depreciating AUD and an overnight bounce in commodity prices. In S. Korea, the Kospi depreciated -1.3%.

In Hong Kong, stocks closed at their lowest in more than four months, tracking other regional bourses dejected by escalating Sino-U.S trade frictions. The Hang Seng index closed down -2.8%, while the China Enterprises Index lost -3.2%.

In China, Shanghai equities plummeted nearly -4% to a two-year low overnight on Trump’s fresh tariff threats that could escalate into a full-blown trade war. The Shanghai Composite Index finished the session down -3.8%, while the blue chip CSI300 index fell -3.6%.

In Europe, regional bourses trade sharply lower across the board following on from Asia’s losses. 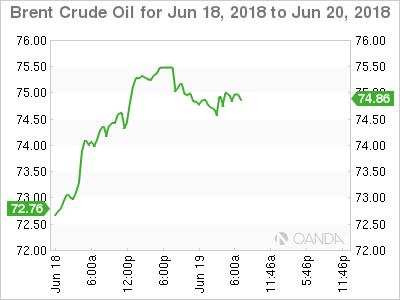 Oil prices are under pressure on expectations that OPEC and its key ally Russia will gradually increase output after withholding supplies since 2017.

Note: OPEC and non-OPEC producers, that include Russia, started withholding oil supplies in 2017 to end a global glut and prop up prices.

OPEC will meet later this week (June 22/23) in Vienna to discuss forward policy. Saudi Arabia and Russia are saying that production should be increased “gradually” if deemed necessary. 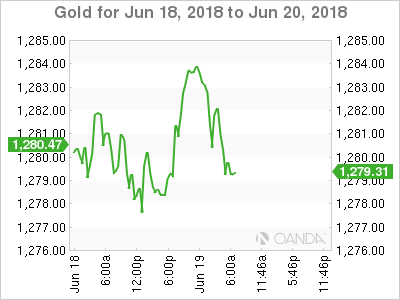 3. Politics and ECB should remain the key drivers for Bunds and spreads

Eurozone government bond yields are trading lower with market participants looking at the ECB’s forum in Portugal as well as politics for further directional clues.

ECB President Draghi signalled earlier today that the bank could extend its QE program again and delay any interest-rate increases to counter possible shocks to the eurozone economy. These ‘easing’ comments have come only day’s after the ECB laid out plans to phase out its bond purchases (QE) – it would suggest that Euro policy makers remain very cautious about winding down its stimulus program just as the region’s economy appears to be slowing. 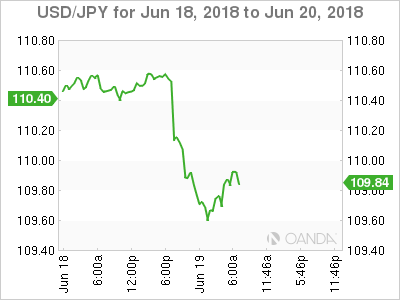 Safe haven demand is lifting the U.S dollar as the possibility of a trade war escalates between the U.S and China.

EUR/USD (€1.1543) is under pressure; matching last weeks intraday low outright (€1.1536) after downbeat comments from ECB’s Draghi earlier this morning. Speaking at the ECB forum in Portugal, he said, “uncertainty surrounding the eurozone growth outlook has recently increased.” He said the ECB would remain patient in determining the timing of the first rate rise. These comments come after last week’s ECB meeting, when the central bank set clear guidance that it wouldn’t raise interest rates at least until after the summer of 2019.

Sterling is off -0.4% at £1.3201 outright, as the USD benefits from its safe-haven status on the back of an escalating trade conflict with China. But there are domestic issues facing the pound as well. Brexit talks have not progressed much since March, while the June 28-29 summit is looming. Also, the Brexit withdrawal bill is still being debated in the U.K. parliament, while weaker U.K. economic data has lowered the chance of an interest rate increase this year.

Note: The fixed income market is pricing in a +8% chance of a BoE rate increase this Thursday. 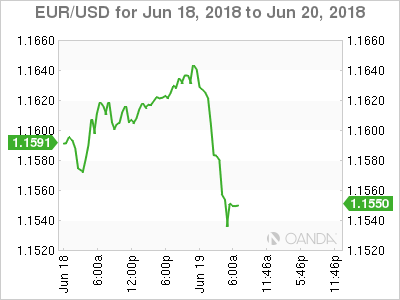 Data this morning from the ECB showed that the eurozone’s current-account surplus eased further in April, registering its third-consecutive monthly decline, but it remained elevated year-over-year.

The region’s current-account balance eased to +€28.4B from a revised surplus of +€32.8B in March.

Expect an elevated euro trade-surplus not to sit well with President Trump. Releases like this morning’s are very much susceptible to the odd drive by Trump Twitter rants just like his repeated ticking-off of Germanys bulging trade-surplus.

Digging deeper, in the 12-months through April, the eurozone recorded a current-account surplus of +€413.7B, which equals about +3.7% of its GDP. 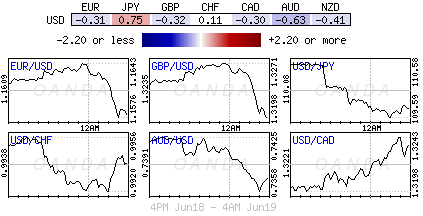