Global growth continues to slow. Global PMI for September showed another drop, pointing to further slowing of the global economy (Chart 1). The weakness was most pronounced in the euro area and China. The US is still a pillar of growth but it is also pretty much the only region with robust activity. This most likely reflects the big fiscal boost this year that has lifted both investment and consumer spending. We expect global growth to stabilise soon and continue at cruising speed. The euro area is set to bottom out and despite the US-China trade war, we believe both monetary and fiscal easing in China will serve as a cushion to growth. We expect US growth rates to slow down from the 4+% in Q2 but to remain above trend over the next year. 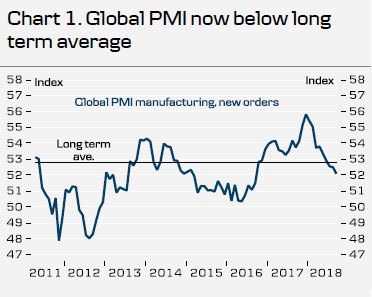 Inflation pressures rising. Despite slower growth, we have witnessed rising inflation pressure over the past months. The oil price is pushed higher as Iran oil exports are hit by US sanctions. In addition, the labour markets in the US, the euro area and Japan are getting tighter, thereby pushing up wage growth. As unemployment falls further, this trend is set to continue.

US bond yields at new cycle high, the Fed on autopilot. The robust US economy and rising inflation pressure led to a new high in US bond yields this week. The 10-year treasury yield rose sharply on Wednesday and increased to 3.23%, the highest level in seven years (Chart 3). Fed chair Jerome Power this week continued to signal that policy rates are more or less on autopilot in the coming quarters until the long-term neutral rate around 3% is reached in mid-2019. In an interview, he said, ‘interest rates are still accommodative, but we’re gradually moving to a place where they will be neutral’, see CNBC. The surge in bond yields put pressure on the stock markets on Thursday. 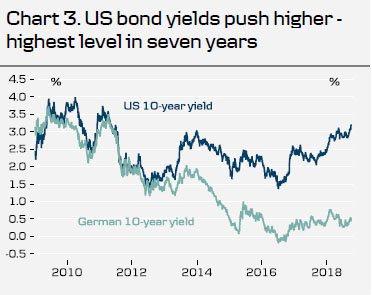 Italy reigniting fears in the bond markets. Italy put itself in the limelight again as the initial budget proposal pointed to a 2.4% budget deficit over the next three years – much higher than expectations. It led to a big sell-off in the Italian bond market, which took the bond yield spread to Germany to a five-year high at 3 percentage points (Chart 4). The EUR also took a hit. During the week, the Italian government signalled that the deficit for 2020 and 2021 would be 2.1% and 1.8%, respectively, which led to some relief in the market, see Bloomberg. However, bond yields are still at elevated levels signalling a fear that Italy could get on an unsustainable debt path and face downgrades. Part of the concern is that the government is much too optimistic in its growth assumptions (rumoured to be 1.6% versus a rate currently around 1.0%). A failure to realise the assumed growth rates could push the deficit above the EU’s 3% limit. On the positive side, there is so far limited contagion to other markets such as the Spanish bond market or the credit market. 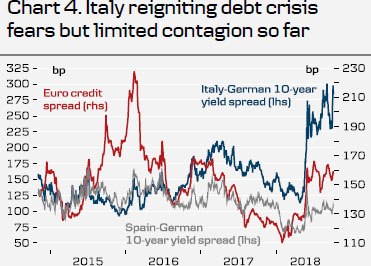 Trump closes trade deal with Canada and Mexico but likely to escalate versus China. US President Donald Trump finally closed the deal with Canada leading to the new USMCA agreement, which replaces the old NAFTA deal. Trump called it ‘the most important trade deal we’ve made so far’. While Trump is getting a win out of it in the short term, it may backfire in the end. President of the Canadian Chamber of Commerce, Perrin Beatty, thus said ‘Canada must remember the lesson this turbulent period has provided: we must never again allow ourselves to be overly dependent on one trading partner’. A similar lesson is learnt in China. Hence, countries may now start to diversify their trade away from the US. Similarly, many countries have signalled a wish to reduce the dependence on the USD, as it gives the US a powerful instrument to put pressure on other countries to follow its line. It is an instrument that no one expected would be used but now the fear about too much dependency on the US economically and financially has grown. China’s President has also stated clearly that China will need to be more selfsufficient and maybe that is not a bad thing, see SCMP. Speaking of China, the remaining big battle on the trade front is between US and China. It is a much bigger challenge, though, and we see a high risk of more escalation with US tariffs on all Chinese imports next year. Eventually it will hurt both countries, though, and a deal should be reached during 2019.

US holds off tariff hike on EU, to start new negotiations instead