Tuesday April 23: Five things the markets are talking about

Most equity markets have opened after the long holiday weekend with mixed results. European stocks have started under pressure, while U.S futures trade rangebound and Asian equities recorded a mixed showing in the overnight session as the U.S earnings season reporting begins to intensify.

In commodities, crude oil prices have extended their recent U.S ‘no waiver’ gains and continue to excite oil bulls. The ‘big’ dollar still has support amongst the majors in another tight range, while U.S treasury yields remain somewhat steady, while Euro yields back up a tad.

Investors continue to look for signs as to whether the ‘dovish’ policy swivel from G7 central banks in recent months is the correct move to solidify global growth just enough to outweigh any weakness in corporate earnings.

In Japan, the Nikkei average ended modestly higher overnight, with oil-related stocks leading the gains after the U.S announced the move to end all Iran sanctions waivers Monday. The benchmark Nikkei 225 index closed out a gain of +0.2%, a five-month high. The broader Topix added +0.3%.

Note: With Japanese companies releasing their annual results later this week and ahead of the 10-day Golden Week holiday, do not be surprised to see investors book some profits.

Down-under, Aussie shares ended atop of their eight-month high overnight, supported by gains in banking and energy stocks. The S&P/ASX 200 index closed up +1%. The benchmark had added about +0.1% last Thursday. In S. Korea, the Kospi stock index was largely unchanged (+0.17%) overnight as investors remained cautious ahead of the release of Korea’s Q1 GDP data, which is forecast to be weak (+0.3% – the weakest in nearly two-years).

In China, equities edged lower again overnight, extending this week’s sharp declines over how much additional support Beijing will provide to the economy after growth beat expectations. The Shanghai Composite index was down -0.5%, while China’s blue-chip CSI300 index was down -0.02%.

Note: The CSI300 and Shanghai Composite both recorded their biggest single-day drops since March 25 on Monday.

In Hong Kong, stocks ended little changed after the long holiday weekend. At the close of trade, the Hang Seng index was down -0.1%, the Hang Seng China Enterprises index fell -0.32%.

In Europe, regional bourses trade mostly lower with the exception of the FTSE 100 following the holiday weekend and after a mixed Asian session. 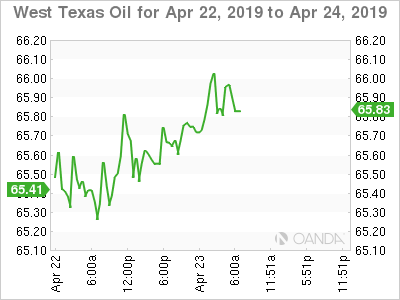 Crude oil prices remain better bid after the Trump administration announced yesterday that they will “not renew waivers” that permitted a number of countries to purchase Iranian crude without facing U.S sanctions after they expire on May 2.

This situation is forcing Iran to renew talks with its partners in the Middle East in a bid to alleviate some of the fallout from Trumps decision. Iran is even threatening to close the Strait of Hormuz, a key oil shipping passage.

Currently, the Saudis have indicated that they are willing to step up if Iranian oil exports crash.

Note: The U.S government has mentioned a number of times this year that they want to cut Iran’s oil exports below +1M bpd or even to zero, and that new action would be taken by May.

Crude oil bulls believe that this week’s surprise announcement by the U.S should have a significant impact in tightening the market even further.

Already having a price impact is Washington having placed sanctions on Venezuela’s oil exports, and also OPEC+ led supply cuts since the beginning of this year.

Ahead of the U.S open, gold prices have edged a tad lower overnight as strong equities provided a risk environment for investors, countering support from the Trump administration move to end waivers on Iranian oil sanctions. Spot gold fell -0.1% to +$1,273.18 per ounce, while U.S gold futures lose -0.2% to +$1,275 an ounce. 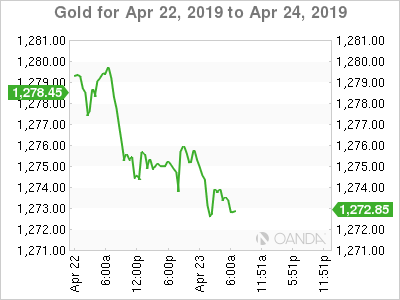 Italy’s 10-year government bond yield has backed up to its highest level in nearly eight weeks this morning, pressured up by unease over government infighting and an upcoming ratings review.

Italy’s 10-year bond yield has jumped +8 bps to +2.67%, its highest since early March. The Italian/German yield gap is now at its widest in a fortnight at around +261 bps.

Ratings agency S&P Global is due to review Italy’s credit rating this Friday. Currently, it rates Italy at BBB, two notches above junk, but has a negative outlook on the country. 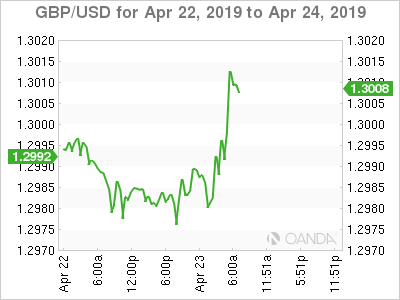 4. Dollar confined to a tight range

USD volatility remains at a lull against G10 currency pairs.

As the U.K parliament returns from the Easter recess, expect the pound (£1.3000) to brace itself for heightened volatility. PM May will again ramp up Brexit negotiations this week as the House of Commons sits again.

The Bank of Canada (BoC) will announce its latest policy decision tomorrow (10:00 am EDT). No action is expected, so all eyes will be on the accompanying statement, updated forecasts, and Governor Poloz’s tone. Markets seem to be expecting an overly ‘dovish; message, and while the Bank is indeed likely to appear cautious overall, it is unlikely to go as far as abandon its rate-hike plans completely. Currently, the loonie (C$1.3369) is getting very little love from eight-month high oil prices.

AUD (A$0.7113) is a tad weaker ahead of tomorrow’s Q1 CPI data. The market is currently speculating that the next Reserve Bank of Australia (RBA) move would be a rate cut.

Bitcoin (BTC) has rallied some +6% the past two-days, edging above +$5,500. Following the roughly +25% jump already this month, BTC has been slightly trending higher despite this post-Easter hop. 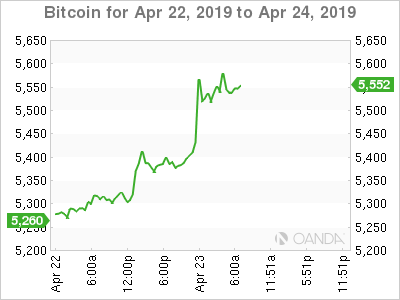 Data this morning showed that Hong Kong inflation remained steady last month as increases in food and housing prices were partially offset by declines in utilities and communication-services costs. 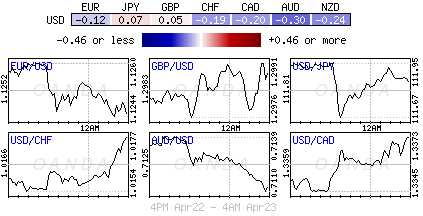 Loonie Reverses Its Losses In The Asian Session