While lacking in central bank meetings, the coming week is still a busy one. A poor showing by the UK Conservatives in the European Parliament elections could make it even more likely that Theresa May is replaced with someone that wants to deliver Brexit ‘no matter what’, keeping the pound on the back foot. Meanwhile, preliminary Eurozone PMIs are unlikely to change the euro’s fortunes, while the Fed minutes may strike a ‘neutral’ tone, leading to a slight unwinding of rate-cut bets.

The week kicks off with preliminary GDP data for Q1 from Japan early on Monday. Forecasts suggest the economy contracted by 0.2% in annualized quarterly terms, amid weakness in industrial production and exports. The US-China trade conflict and the broader global slowdown seem to have taken their toll on Japan, which is highly reliant on foreign demand for its products.

Inflation data for April are also due on Friday. The forward-looking Tokyo CPIs for the same month picked up speed, so the nationwide prints could follow suit. As for the yen, it’s unlikely to react much to data releases. Instead, the safe haven currency may take its cue mainly from changes in risk sentiment.

On that front, US-China tensions seem set to escalate further as Trump is already threatening more tariffs on all remaining Chinese imports. He’s probably bluffing, meaning he’s unlikely to actually impose more duties as that could really impact US consumers, and thus hurt his approval rating ahead of the 2020 elections. Still, he’ll certainly threaten playing that card, so risk aversion may remain high in the summer months, spelling upside risks for the yen.

Fed minutes could lead to some unwinding of rate-cut bets

The highlight in the US will be the minutes of the latest Fed meeting, due on Wednesday. Chairman Powell was less cautious than markets had anticipated back then, indicating that the recent softness in inflation is likely to be only transitory – overall downplaying the prospect of a rate cut in the foreseeable future.

His fairly confident tone caused market bets for a cut to be pared back, but that didn’t last long. Investors saw the latest escalation in the US-China trade conflict as raising the odds for the Fed to ease this year, with a quarter-point rate cut by December now being fully priced in. Crucially though, trade tensions escalated several days after the Fed meeting in question, so these minutes probably won’t reflect any major trade concerns. 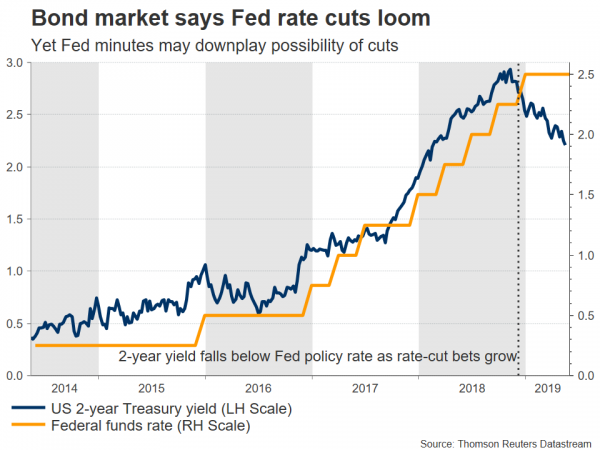 Rather, they may echo Powell’s sanguine tone, emphasizing that the Fed is neutral for now and that economic data would need to deteriorate sharply for a cut. Given how dovish market pricing currently is, a neutral bias could trigger a slight unwinding of rate-cut bets, benefiting the dollar a little.

The nation’s durable goods orders for April are also coming out on Friday.

Euro area PMIs may overshadow everything else

Perhaps the most crucial release of the week, will be the Eurozone’s preliminary PMIs for May – out on Thursday. Euro area growth has struggled in recent quarters, leading the European Central Bank (ECB) to put its rate-hike plans on ice and consequently hurting the euro. In fact, investors believe the normalization ship has sailed, with money markets now suggesting a small probability for an ECB rate cut this year, not a hike. 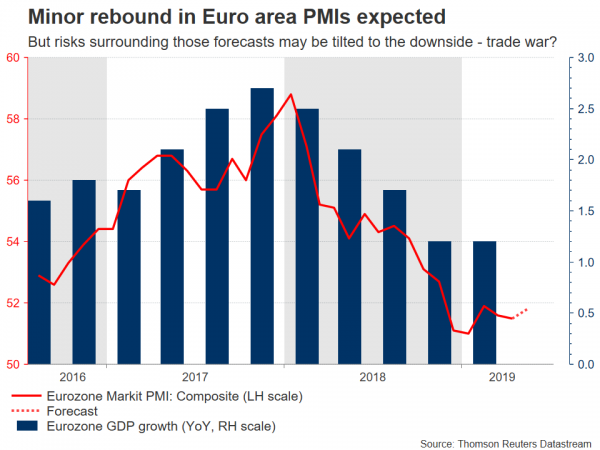 Forecasts point to a minor rebound in both the manufacturing and the services PMIs, though manufacturing is expected to remain in contractionary territory. Alas, the risks surrounding these forecasts may be tilted to the downside, considering that the recent escalation in the US-China trade tensions may have weighed on European business sentiment too. Another soft set of PMIs could spell more trouble for the already-battered euro, indirectly helping to keep the dollar buoyant, for a lack of better alternatives.

Germany’s Ifo survey for May and the minutes of the latest ECB meeting are also coming out on Thursday.

In the UK, inflation and retail sales figures for April will hit the markets on Wednesday and Friday respectively. As usual though, the pound is unlikely to react much to economics. Politics continue to drive sterling, which has taken a beating lately as the Brexit outlook worsened. Cross-party talks between Theresa May’s Conservatives and Labour are ready to collapse, dashing hopes for a bipartisan compromise to break the deadlock.

More importantly, May’s premiership won’t last much longer. She will bring her Brexit deal back to Parliament for yet another vote in the first week of June, and if she loses that one too, reports suggest she could resign immediately. Even if she wins the vote, she has still agreed to step aside for a new Conservative leader before long. Make no mistake, this is a disaster in the making for the pound. Most of her potential Tory replacements are ‘hardline’ Brexiters that may want to exit the EU in October no matter what, implying that a no-deal Brexit is slowly becoming a realistic scenario again. 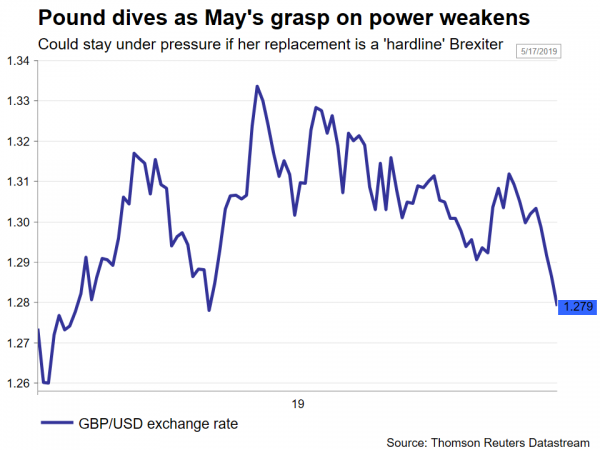 On a related note, the UK will hold EU Parliament elections on Thursday. Markets usually ignore such events, but this time may be different as opinion polls suggest May’s Conservatives will get crushed, with many voters defecting to Nigel Farage’s new Brexit Party. A poor showing could add even more pressure on the Tories to rebrand their image by replacing May with a much more ‘Leave friendly’ leader – like Boris Johnson.

Besides trade news, the commodity linked currencies – aussie, kiwi, and loonie – will also look to key releases from their respective economies. In Australia, minutes from the latest RBA meeting are due on Tuesday. These may attract some attention this time as investors try to gauge the likelihood for a rate cut at the next gathering on June 4, something currently seen as a coin flip according to market pricing.

Meanwhile, New Zealand’s retail sales for Q1 will be released during the early Asian session on Wednesday. Canada’s retail numbers for March will follow later the same day.

Loonie Trading A Tad Higher In The Morning Session