Tuesday May 21: Five things the markets are talking about

European equities along with U.S. futures are trading a tad higher following a mixed session in Asia overnight as the Sino-U.S trade-war rhetoric and actions continue. The ‘big’ dollar remains better bid in a contained trading range while U.S Treasury yields are steady.

In FX, the AUD has erased most of its surprise weekend election gains as the RBA minutes indicated the possibility of a rate cut at next month’s monetary policy meeting, while in Turkey, authorities again made another attempt to support the beleaguer TRY. In the U.K, sterling has fallen to a new five month low as PM May attempts to gain support for her Brexit Withdrawal Bill.

In commodities, crude oil remains better bid on signs that OPEC+ will extend production cuts beyond next month.

Note: Bank of England (BoE) Governor Mark Carney’s planned inflation hearing appearance before Parliament today has been postponed and has yet to be rescheduled.

In Japan, the Nikkei slipped overnight as the U.S blacklisting of Huawei took a heavy toll on suppliers to the Chinese telecoms’ equipment maker, but the downside was limited after the U.S temporarily postponed trade restrictions. The Nikkei ended -0.1% lower, while the broader Topix dropped a deeper -0.3%.

Down-under, Aussie shares advanced overnight, supported by financials after mortgage rules were eased in a bid to spur borrowing and the chance of an RBA June interest rate cut increased. The S&P/ASX 200 index closed out +0.4% higher. In S. Korea, the Kospi stock index ended firmer, snapping eight sessions of net selling, with gains in heavyweight Samsung supporting the benchmark. The index closed up +0.24%.

In China, stocks gained as investors “took heart” from the temporary easing of U.S trade restrictions on Chinese telecoms firm Huawei. At the close, the Shanghai Composite index was up +1.23%, while the blue-chip CSI300 index ended +1.35% higher.

In Hong Kong, investors had a different reaction. The Hang Seng index ended at its lowest close in nearly 16 weeks as investors worried about the risk of escalating Sino-U.S trade tensions and this despite a temporary easing of restrictions on China’s Huawei. At the close of trade, the Hang Seng index was down -0.47%, while the Hang Seng China Enterprises index closed +0.01% higher.

In Europe, regional bourses are trading mostly positive on news that Huawei has been granted a temporary 90-days license in the U.S. 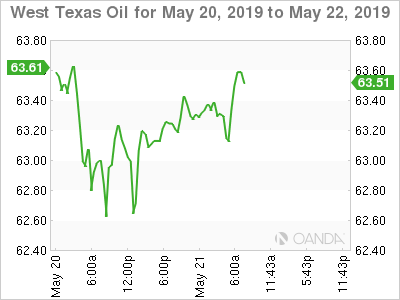 Oil remains better bid on escalating U.S-Iran tensions and amid market expectations that OPEC+ will continue to withhold supply this year. However, gains are been capped by investor concerns that a prolonged Sino-U.S trade war could lead to a global economic slowdown.

After a rocket attack in Iraq’s capital Baghdad yesterday, President Trump has threatened Iran with “great force” if it attacked U.S interests in the Middle East. Iran has said today “that it would resist U.S pressure,” declining further talks under current circumstances.

The crude market has already been tight, supported by OPEC+ withholding supply since the start of this year.

Note: An OPEC+ meeting has been scheduled for June 25-26 to discuss the policy, but the group is now considering moving the event to July 3-4, as the Studies signal a willingness to continue withholding output.

Prices have been capped by investor worries that the U.S and China are “digging in for a long, costly trade war” that could result in a broad global slowdown.

Ahead of the U.S open, gold prices have eased a tad after touching their two-week low yesterday, on increasing bets that the Fed will ‘not’ cut interest rates this year which is supporting the USD and hurting the ‘yellow metals’ safe-haven appeal. Spot gold edged -0.1% lower to +$1,275.81 per ounce, while U.S gold futures have also eased -0.1% to +$1,275.40 an ounce. 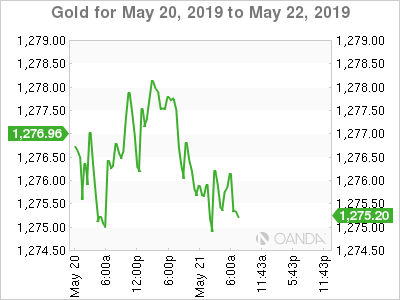 3. German Bund yields edge up but remain in negative territory

German 10-year Bund yields have backed up a tad, but remain comfortably in negative territory, as range-trading continues. Macroeconomic and political risks have been sovereign bonds key drivers, with supply emerging as another potential mover. The 10-year Bund yield trades at -0.08%, up +0.6 bps.

E.U bond issues have seen strong demand this year given a backdrop of weak economic growth and expectations that the ECB will maintain its “ultra-easy” monetary policy stance for the foreseeable future.

Global yields have fallen sharply on the back of renewed U.S./China trade tensions and Brexit uncertainty, however, a perception that central banks will have to take further action to support means that any rise in yields should be limited for now. 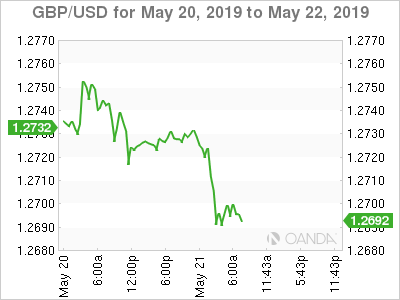 The ‘big’ dollar is holding atop of its three-week high as we head stateside, supported by higher U.S yields and as intensifying trade frictions between the U.S and China support investors’ appetite for the “safe-haven” greenback.

Sterling (£1.2693) has dropped to a new five-month low as PM May faces her cabinet ministers today in a last effort to convince them to support her Brexit deal. MP Rees-Mogg says he will not be backing her Withdrawal Agreement Bill, saying it is a “very bad deal.” The pound remains the worst-performing currency in the G10 this month. PM May is also expected to update her cabinet on the progress of cross-party talks with the Labour party which ended last week.

Note: May’s Conservatives are expected to experience a defeat of “historic proportions” at this week’s EU parliamentary elections on May 23.

Down-under, the Reserve Bank of Australia (RBA) minutes overnight revealed a softening in language with outlook “less favorable” with an easing policy in the next six-months. RBA Governor Lowe said the “board will consider the case for a rate cut in June.” AUD is -0.39% lower at A$0.6880.

TRY (-0.31% at $6.0455) is weaker after the CBoT lowered the swap market lira interest rate and opened a repo auction for the first time in a fortnight, reversing a policy tightening step it had taken to support the currency. 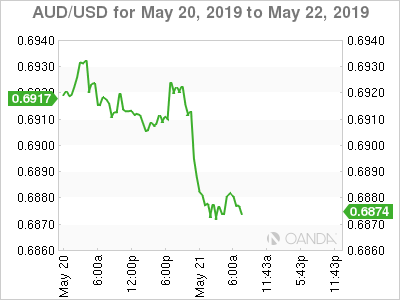 According to a report by the OECD this morning, economic growth in China and the U.S could be -0.2-0.3% lower on average by 2021 and 2022 if the “two countries do not row back on tit-for-tat tariffs” in their dispute that has dampened the global economic outlook.

In its biannual Economic Outlook, the OECD said that “the global economy would grow by only +3.2% this year as growth in trade flows is nearly halved this year to only +2.1%.”

That would be the slowest pace of global economic growth in three years and was down marginally from their last forecast in March for growth of +3.3%.

However, they expect the world economy “should fare slightly better next year with a growth rate of +3.4%, but only if the U.S and China pull back from tariff hikes announced this month.” 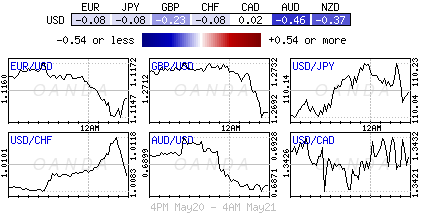