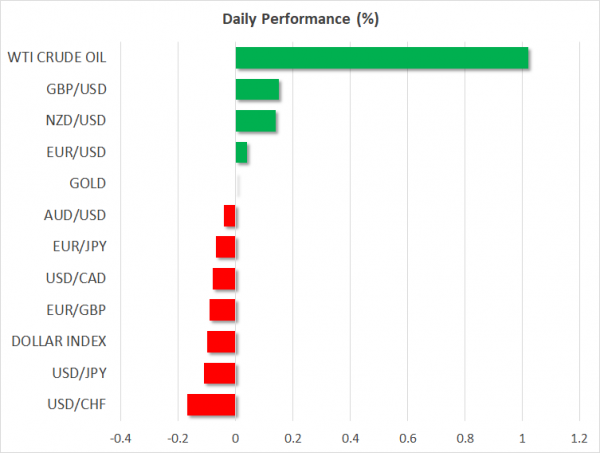 Risk aversion dominated markets on Thursday, as alarming PMI data from major economies coupled with deepening US-China trade tensions amplified concerns around the global growth outlook. Preliminary Markit PMIs from both the US and Europe disappointed, highlighting that trade worries are starting to impact business confidence and new orders.

The result was a classic risk-off reaction, with stock markets both in Europe and the US suffering losses of 1-2 percent as investors rotated out of riskier assets, while haven currencies such as the yen and Swiss franc outperformed in the FX universe. The dimmer outlook for global demand also weighed on oil, with WTI falling by more than 5%, dragging the Canadian dollar down alongside it.

Most of these sharp moves have retraced a little on Friday, with futures pointing to a modestly higher open on Wall Street for instance, after some soothing remarks by Trump that there’s still a ‘good possibility’ for a trade deal and that Huawei may be part of it. Alas, this looks more like a temporary reprieve before the next ‘storm’, not the beginning of a stable recovery in sentiment, as there are currently no signs to suggest that tensions will subside anytime soon.

The most striking move though, was the retreat in the dollar, which pulled back as worries that US growth may be faltering led investors to reassess the outlook for monetary policy. Specifically, markets priced in more Fed easing, with one quarter-point rate cut now being fully priced in by December and traders also assigning a ~25% probability for a second one. That sent long-term US rates lower, diminishing some of the greenback’s carry appeal as interest rate differentials narrowed.

Overall, while it does seem likely that Fed officials will soon adopt a more cautious tone, perhaps as early as at their June meeting, this may not be a game-changer for the dollar’s fortunes overall. A lot of easing is already priced in, implying that for the greenback to materially weaken, it may require either a prolonged string of discouraging US news or positive developments abroad that drive funds out of America – neither of which is there yet.

US durable goods orders are on tap today.

Pound catches its breath after sell-off

The British pound has stabilized somewhat on Friday, following more than two weeks of continued losses, as the political situation calmed down a little – and perhaps as some traders locked in profits on their prior short positions. The latest headlines suggest Theresa May could announce her resignation as early as today, providing a timetable for her departure so that a new Tory leader can be chosen in the summer.

Her most likely replacement is Boris Johnson, who effectively spearheaded the Leave campaign and has since advocated for less close relations with Europe than what May has been pursuing, for example. This implies a greater risk for a no-deal Brexit, and while some of that gloom has probably been priced into the battered sterling by now, the overall picture still looks negative. 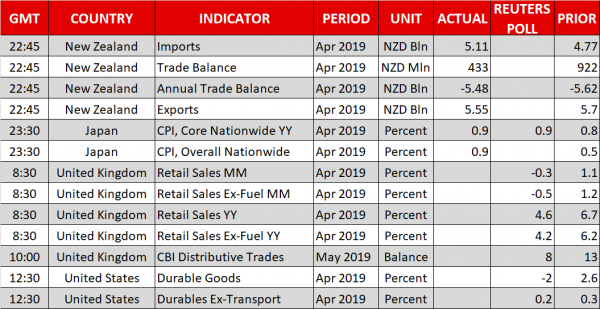