As trade tensions continue to simmer and there’s no end in sight to the Brexit turmoil, risk sentiment will probably remain the biggest driver for forex markets in the coming week. But there will still be several market-moving events for investors to keep a watch on. PCE inflation numbers from the United States, Canadian Q1 GDP estimates and a Bank of Canada meeting, as well as capital expenditure figures from Australia will be the main highlights.

Aussie to stay on the defensive

As the Reserve Bank of Australia’s next policy meeting nears on June 4, traders will be looking for further confirmation from upcoming releases that the central bank will cut rates at that meeting. Earlier this week, RBA Governor Philip Lowe gave his strongest indication yet, saying the Bank “will consider the case” for a rate cut at the meeting. Unusually though, the Australian dollar, although it remains on the back foot, has not made fresh lows as the surprise election win for the ruling Conservative coalition government has provided some support on the expectation that there will be large tax cuts to boost the economy. 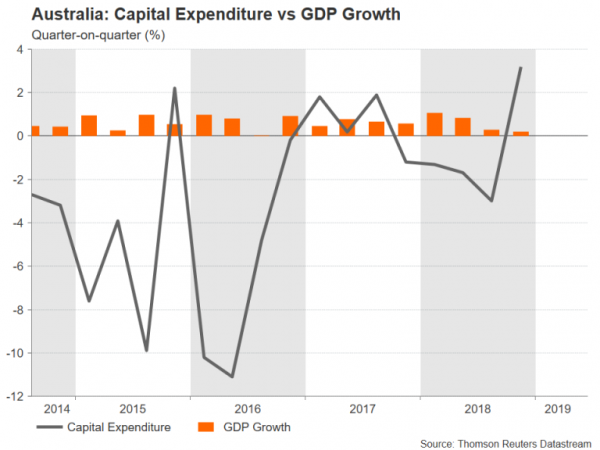 The agenda for the aussie next week is pretty busy: April building approvals are due on Thursday along with first quarter capital expenditure figures. Private sector lending data will follow on Friday. The capex report will be the most important as it’s seen as a good indicator of GDP growth, which will be published on June 5. PMI numbers from China will also be relevant for the risk-sensitive aussie as any weakness in the manufacturing PMIs on Friday would have a negative impact on the market mood at a time when the global outlook is already deteriorating from a worsening trade war.

With the US-China trade war entering unchartered territory, the threat of a no-deal Brexit rising, renewed jitters about global growth and not to mention flaring tensions in the Middle East, investors are likely to continue to seek safety in risk-free assets such as government bonds and of course, the yen and the Swiss franc. The Japanese currency has been a long-time favourite for investors at times of market panic given Japan’s status as the world’s number one creditor nation. 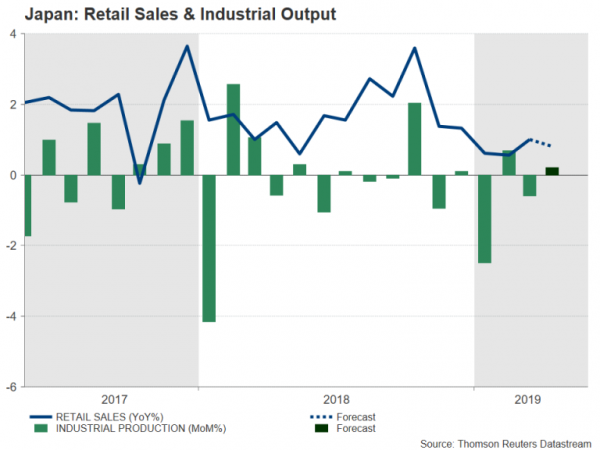 The yen is therefore expected to move in line with risk appetite, with next Friday’s releases out of Japan struggling for attention. Nevertheless, with the increasing possibility that the Bank of Japan will have to ramp up its stimulus at some point later this year, data on April industrial output and retail sales will be watched to gauge the health of the Japanese economy.

European elections to set tone for the euro

The only noteworthy release out of the Eurozone next week is the Economic Sentiment Indicator for May on Tuesday. Following the flash PMIs this week that were underwhelming, the ESI is not expected to paint a significantly different picture for the Eurozone economy. This means the focus in the coming days will be on politics as the results of the June 23-26 European Parliament elections will be known when trading starts on Monday. 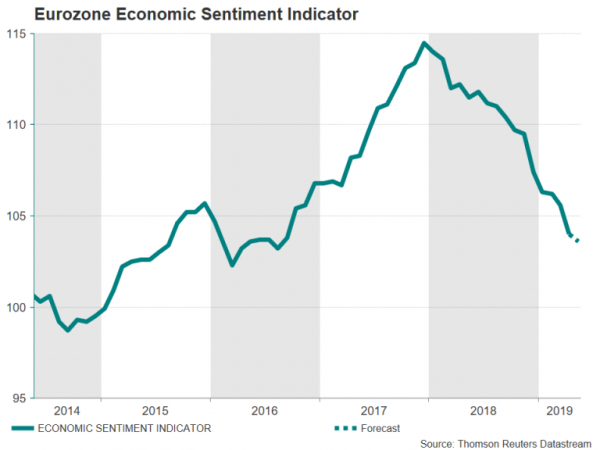 If there’s a sizeable shift away from centrist parties to populist movements, the euro is likely to face some downside pressure. However, unless there are any big shocks in favour of Eurosceptic and populist parties, any sell-off will probably be limited.

The UK calendar is also looking very light so politics will be the main driver for sterling too. As had been highly speculated and following intense pressure from all sides for her to step down, Prime Minister May has announced she will resign on June 7, paving the way for a new leader. All eyes have now swiftly turned to the leadership race, specifically, the confirmed and rumoured contenders to replace her, and what that could mean for the type of Brexit the next UK prime minister pursues.

The Bank of Canada joined the Fed in hitting the pause button earlier this year, but unlike the Fed, the BoC has maintained a tightening bias. Despite that, the Canadian dollar is up just 1% versus the greenback this year and has been bound between the C$1.3520 and 1.3350 levels for the past month. Next week’s GDP release and BoC policy meeting have the potential to break the loonie outside of this range if they substantially alter the outlook for interest rates. 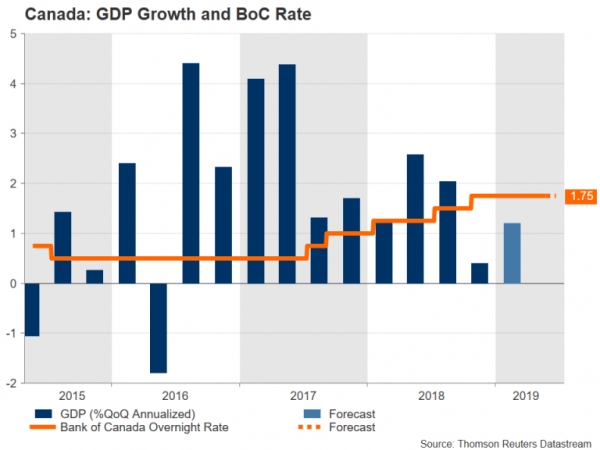 BoC Governor Stephen Poloz is expected to reaffirm his recent view that the “the natural tendency is for interest rates to still go up a bit” when the Bank announces its latest policy decision on Wednesday. On Friday, first quarter GDP estimates will be key in helping policymakers decide whether the economy is on the mend from the soft patch experienced at the end of 2018.

US GDP revision and PCE inflation main focus for the dollar

The US week will get off to a quiet start as American markets will be closed on Monday for Memorial Day. But the data will start pouring in on Tuesday with housing figures potentially attracting some interest if there’s any unexpected weakness in either the official or the S&P CoreLogic Case-Shiller home price index for March. The Conference Board’s consumer confidence index is also due on Tuesday and is forecast to edge up from 129.2 to 129.8 in May.

More housing indicators will follow on Thursday with pending home sales for April. But the spotlight will be on the second estimate of GDP growth in the first quarter. The preliminary estimate had shown the US economy expanded by an annualized rate of 3.2% in Q1. Analysts are predicting a small downward revision to 3.1% in the second print.

The main highlight for the US dollar, though, will likely come from the personal income and outlays report on Friday. Personal income growth is anticipated to have accelerated slightly to 0.2% month-on-month in April, while personal consumption is forecast to have moderated from 0.9% to 0.2% m/m. More importantly, the core personal consumption expenditures (PCE) price index, which the Fed tracks for its inflation target, is projected to have stayed unchanged at 1.6% year-on-year in April. 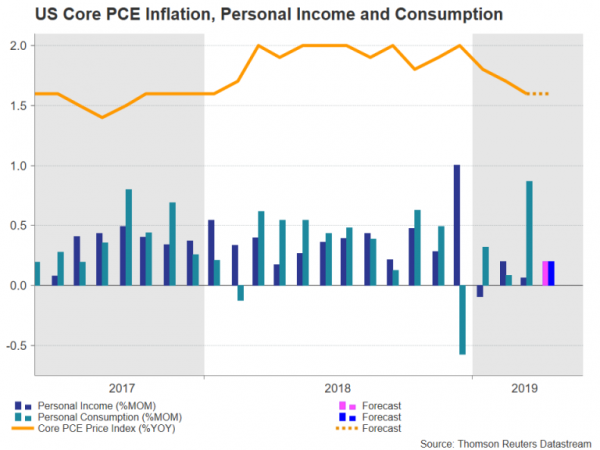 Should the core PCE price index fail to head higher over the next few months, or worse, drift further lower, pressure would grow on the Fed to cut rates. The US central bank has so far stuck to its neutral stance even as global risks to growth rise. But even if the Fed did start to signal a move towards a rate cut, the absence of bright spots elsewhere in the world is likely to keep dollar in demand.