Global markets returned to a pessimistic mood this week, focusing on negative headlines about U.S.-China trade relations. Oil prices fell sharply on the week, as rising inventories in the U.S. had markets worried that trade uncertainty is dampening demand. Measures of manufacturing confidence across various regions were also weak. Manufacturing activity in Europe and Japan continued to contract. In the U.S., the Markit gauge of manufacturing confidence also showed a further deterioration in May.

To top it all off the Brexit saga came back to the fore, as Prime Minister Theresa May announced her resignation. May had been unable to get her negotiated Brexit deal through parliament. The way forward on Brexit remains unclear, and the new Conservative leader, who should be selected by the end of July, will not have a lot of time to chart a new course before the Oct 31st deadline for Britain to leave the EU. In the meantime, the cloud of uncertainty continues to hang over the UK economy, and the increased probability of a no-deal Brexit has weighed heavily on the pound over the past week.

The sour news continued with the April durable goods orders report, which showed total orders fell 2.1% in April. Nondefense capital goods orders ex-aircraft – a closely watched gauge of business capital spending – was also down in April (-0.9%). Durable goods orders are quite volatile month-to-month, but on a trend basis (the six month moving average) orders have gone sideways at best since late 2018 (Chart 1). This is consistent with the theme discussed in last week’s Bottom Line, that cracks continue to appear in the US manufacturing sector: foreign demand has cooled, and uncertainty on the trade front weighs on business sentiment and willingness to spend on new equipment.

The President has recognized the impact trade conflicts are having on at least one sector of the economy. He formally announced a $16 billion aid package for farmers hurt by Chinese retaliatory tariffs on key agricultural exports from the U.S. This amount is slightly larger than last year’s aid package (around $12 billion). The combined cost of these packages more than outweighs the increase in customs duties the U.S. has collected since the Administration started ratcheting up import tariffs early in 2018 (Chart 2), erasing any fiscal benefits of the tariffs.

Amidst the headlines on ongoing trade tensions between the world’s largest economies, the minutes from the most recent FOMC meeting already seemed a bit stale. These deliberations occurred before the latest increase in the tariff rate on certain Chinese imports. The minutes showed the FOMC’s commitment to patient monetary policy, and a significant discussion on whether the recent softness in inflation is transitory, or a more persistent trend. The Committee is clearly divided on that topic, and a couple more months of data is likely to settle the debate. Inflation aside, given a building cloud of global economic uncertainty, a prolonged pause on rates seems a wise course of action. 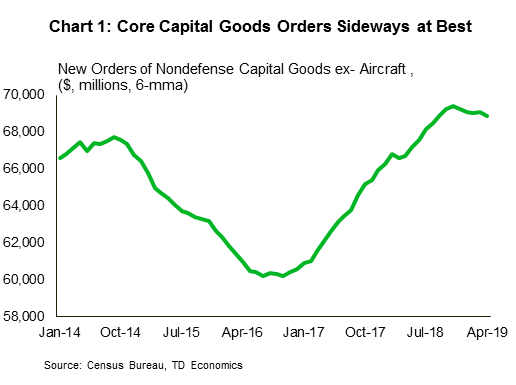 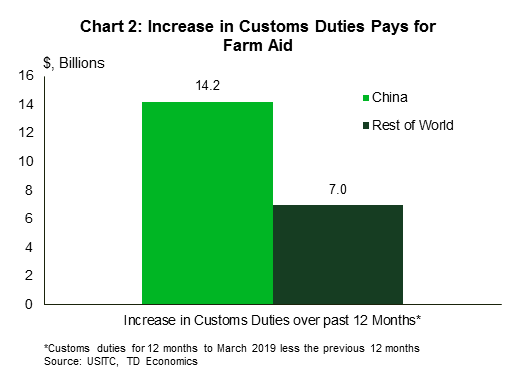 Trade-war related fears of a weaker global economic backdrop intensified as the week went on, sending government borrowing costs lower. Crude oil followed suit, shedding more than US$4 from the benchmark WTI contract. The S&P/TSX Composite index joined in, looking poised to end the week lower at the time of writing. Markets seemed to have ignored the relatively solid domestic data backdrop this week, focusing more on the external risks than the signs of improving domestic momentum.

Indeed, on the data front, we got more signs that the recent economic soft patch may be ending. Retail sales rose 1.1% month-on-month in March. The gain was largely down to rising prices at the pump, leaving sales volumes up a more modest 0.3% on the month. While not a robust outturn (volumes are down a tick on the quarter as a whole), this was the second month of gains, a welcome break from the otherwise lackluster performance over the past year or so (Chart 1). The wholesale report revealed a similar story of improvement following time in the doldrums. In both cases it is notable that, although auto sales have been soft, there is some tentative evidence of improved conditions in other interest rate sensitive sectors. In particular, furniture and home furnishings, as well as the building material/garden equipment categories have shown signs of improvement, albeit from soft starting points.

These data point to a Canadian consumer regaining some confidence and spending power. Solid job markets and some upward movement in wages bode well for consumer spending, particularly given a Bank of Canada policy interest rate unlikely to move any time soon. On that front, we expect a more positive assessment of the economy with Wednesday’s interest rate decision, pointing to strong labour markets and the removal of steel and aluminum tariffs. But, the intensified U.S.-China trade dispute is likely to also feature prominently, suggesting that ultimately, a holding pattern remains warranted.

The other item likely to give the Bank of Canada assurance that the current policy setting is the right one will be Friday’s first quarter GDP report, which should come in broadly in line with their forecast. We expect growth of just 0.4% q/q annualized, matching Q4’s soft report. The details should be much better though. We see signs of a return of business investment, and rising incomes should help keep consumer spending solid. Such a soft headline outturn may seem surprising in light of the generally solid monthly GDP numbers (i.e. GDP by industry, with a robust March report in the cards), but a very weak export performance, measurement differences, and a downgraded picture of construction activity from Statistics Canada all point to quarterly (expenditure based) GDP underperforming the monthly indicators (Chart 2; potential revisions to the monthly profile may reduce this gap). Regardless of the headline number, the generally solid expected composition of growth and good momentum heading into Q2 will be a welcome change from recent economic performances. 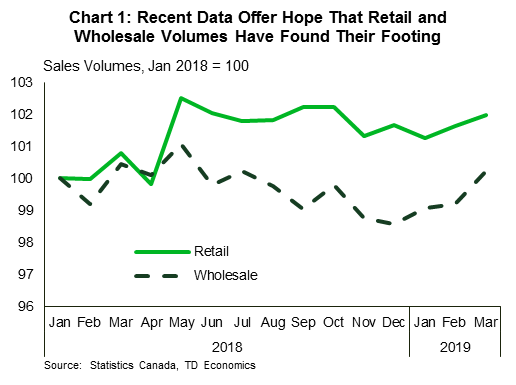 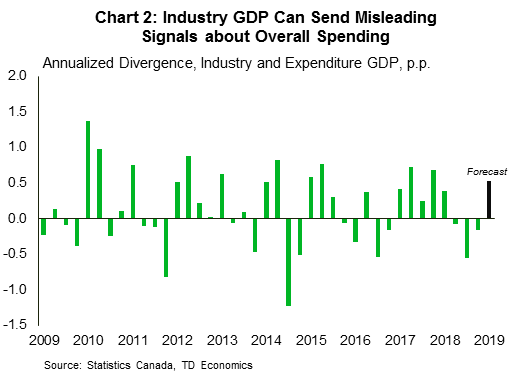 We expect a solid 0.2% m/m increase in core PCE prices for April which should translate into a steady 1.6% y/y inflation rate after rounding, with risks skewed towards a softer print in our view. Headline PCE should firm by 0.1pp to 1.6% with prices up 0.3% m/m. We look for muted consumer spending after an outsized 0.9% m/m jump in March, with nominal personal spending up just 0.1% on the month. However, the choppiness in the spending data should fade as tight financial conditions and delayed tax refunds recede from view. 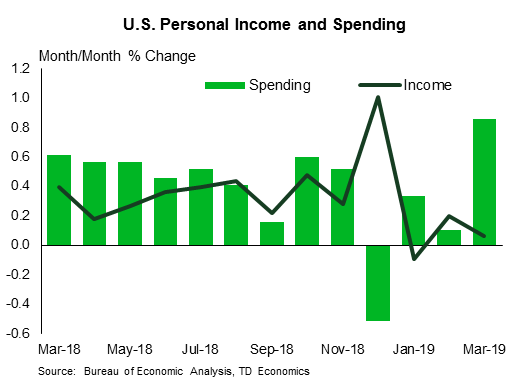 We look for the Bank of Canada to hold rates unchanged at 1.75% during next week’s meeting, where the policy statement should keep April’s messaging largely intact. The domestic economic outlook has stabilized since the April BoC announcement, so we expect the Bank to describe the economy as evolving in line with expectations. The forward looking language should be unchanged, with the Bank continuing to focus on household spending, oil markets, and global trade uncertainty. The apparent deterioration in the trading relationship between the US and China should feature prominently, but the Governor’s constructive comments on the labour market tilt the balance of risks towards a more optimistic statement. 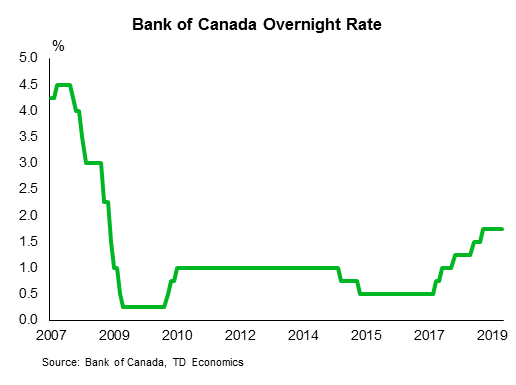 We look for another soft quarter for economic activity with growth of just 0.4% (q/q, annualized) in Q1. Beneath the repeat headline number should be better details. Imports and other data suggest a rebound of business investment at the start of the year (+7.7%). A healthy labour market likely underpinned a moderate pickup in household spending (+2.1%), notably on services. Conversely, recently revised construction data and soft resale activity point to little growth in residential investment (+1.5%). The key headwind to GDP growth in Q1 will be the sizeable drop in exports (-5.6%), where the quarterly performance was disappointing across most product categories. Offsetting this is an expected jump in business inventories (adding 1.5 p.p. to headline growth) as levels in the energy sector remained elevated post-curtailment and stockpiles elsewhere continued to build.

Industry-level GDP should rebound by 0.3% in March on broad strength across goods and services. Construction activity appears to be the one soft spot on a pullback in both the residential and nonresidential components, although strong April housing starts suggest a rebound in the coming months. Elsewhere in the goods-producing sector we look for a rebound in manufacturing on the heels of a sharp pickup in real manufacturing sales while energy will make a positive contribution on higher crude oil output. Looking to services, the stabilization in existing home sales should lead to a rebound in real estate after cold weather drove a pullback in February, while higher wholesale and retail sales will also provide a tailwind. Services will also benefit from a rebound in rail transport after a combination of weaker crude exports and the CP derailment weighed on GDP in February. The 0.3% print will provide a solid handoff to Q2 where the Bank of Canada has set the bar low with projections for 1.3% quarterly growth.

It bears noting that the quarterly expenditure data is expected to diverge from its monthly counterpart (i.e., GDP by industry), which suggests Q1 growth near 1%. This divergence stems from measurement differences (including price deflators), the notable weakness in exports, and the risk of downward revisions to the monthly data in light of weaker reported construction activity this week. Divergences between the two measures are common and can be large, but are difficult to forecast, presenting an important upside risk to our Q1 national accounts forecast. 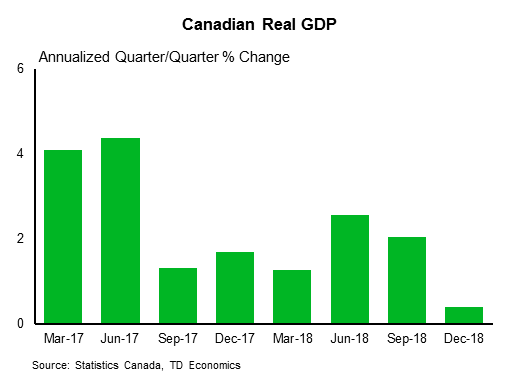