The European Central Bank’s policy meeting will be the focal point for traders next week as expectations are running high that a large stimulus package is on the way. But as the ECB takes action to boost flagging Eurozone growth, key indicators out of China, Japan, the United Kingdom and the United States will also be on the radar as investors seek clues about policy easing elsewhere. Chinese trade figures and US retail sales will be the main highlights from these releases. But over in the UK, the pound’s fate will once again be determined by Brexit happenings as Prime Minister Johnson fights to regain control of Parliament.

Trade numbers out of China are released on Sunday and will probably set the market tone on Monday. If expectations of a 2% year-on-year rise in exports in August are met, it’s unlikely to generate much alarm about the state of China’s economy. The imports number will also be watched as it’s considered to be a good guide to the strength of domestic demand. Imports are forecast to have fallen by 6% y/y in August, pointing to ongoing weakness. 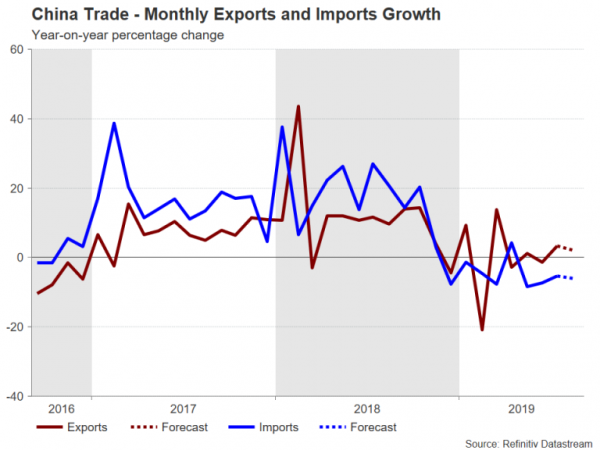 Another barometer for domestic demand, specifically, for factory goods, is the producer price index (PPI) due on Tuesday. PPI is forecast to have declined again on a yearly basis, while the consumer price index (CPI), which will be reported alongside it, is expected to have eased slightly to 2.6% y/y in August.

The China-sensitive Australian dollar will likely take its cue mainly from the Chinese data given the absence of any major releases out of Australia, though business and consumer surveys out on Tuesday and Wednesday, respectively, might attract some attention. Traders will also be on the lookout for any headlines on the trade front as preparatory talks get underway by US and Chinese negotiators ahead of high-level discussions in early October.

Revised GDP figures due out of Japan

Japan will have a data-heavy calendar next week, shedding some light on how well the economy is holding up amidst the global slowdown and ongoing trade tensions. Revised estimates of second quarter GDP growth are out on Monday, along with the current account figures for July. The next important numbers will come on Thursday in the form of machinery orders and corporate goods prices for July.

However, with the Bank of Japan being in a bind, the upcoming releases are not expected to change much in terms of policy direction as the BoJ will probably sit on the sidelines until things were to get much worse, given its very limited firepower. In the meantime, the yen could face a further retreat if risk appetite continues to improve in the coming days.

The European Central Bank communicated its intention to take decisive policy action in September well in advance of Thursday’s meeting, fuelling speculation that it is about to unleash another ‘bazooka’ of monetary stimulus. However, there’s a risk markets may have gotten ahead of themselves as remarks by ECB officials in recent days have cast doubt on the likelihood of a fresh round of asset purchases.

Should the bank deliver only a rate cut (a 10-basis points reduction in the deposit rate is almost certain), the decision could be met with disappointment, triggering a sell-off in European stocks while boosting the euro. However, if the ECB’s announcement falls short of expectations, its forward guidance will be just as important, and the market fallout could be minimized if policymakers leave the door open for quantitative easing in the future. 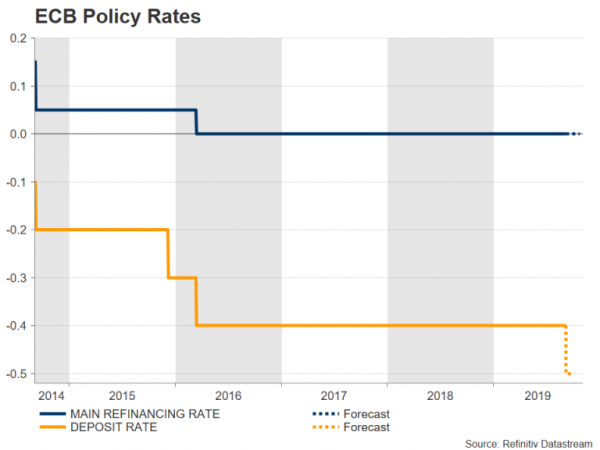 On the other hand, reaction to Eurozone data is anticipated to be much more muted as they will consist mainly of second-tier releases. German trade numbers for July are due on Monday, followed by Eurozone industrial production figures for the same month on Thursday.

A flurry of data is expected out of the UK on Monday, including the monthly GDP estimate, industrial and manufacturing output figures and trade numbers, all for July. Recent indicators out of the country have been poor and the latest PMI readings suggest the British economy is heading for a 0.1% contraction in the third quarter, which would mean the economy is technically in recession. 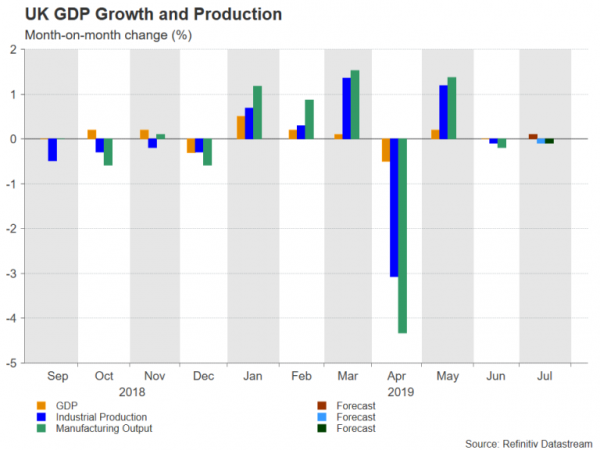 The labour market report on Tuesday is likely to be more positive as wage growth has been accelerating in recent months and employment also bounced back in June after a couple of months of slow growth. However, an overall expected downbeat set of data will not be able to stop the pound from bursting higher if Prime Minister Boris Johnson fails again in his bid to call a snap election.

Johnson is expected to make a second attempt on Monday to seek a general election, hoping that Labour will support the motion this time and give him the two-thirds majority he needs to pass it. Labour refused to back Johnson’s initial call for elections, wanting instead to wait for the Brexit delay bill to become law to safeguard against a no-deal Brexit on October 31.

Should Labour leader Jeremy Corbyn decide to vote in favour of a general election the second time, the pound could come under renewed selling pressure as the odds of winning and gaining a majority would be in Johnson’s favour. If, though, Labour refuse to back it again and a vote of no-confidence is triggered either by Labour or the government, the process would first require for the opposition to try and form a new government, in which case, Corbyn would stand a better chance of taking over with the possible help of smaller parties such as the Scottish Nationalist Party.

US inflation and retail sales numbers on tap

As the Federal Reserve enters its blackout period ahead of the September 17-18 policy meeting, investors will have to keep guessing the Fed’s next move with the help of inflation and retail sales data, amongst others.

First up on the US calendar is the JOLTS jobs openings on Tuesday before attention turns to inflation measures on Wednesday and Thursday. August producer prices are out on Wednesday and consumer prices will follow on Thursday. The annual rate of CPI is forecast to have stayed unchanged at 1.8% in August, but the core rate is projected to have inched up to 2.3%, potentially giving the Fed hawks less reason to support aggressive rate cuts. 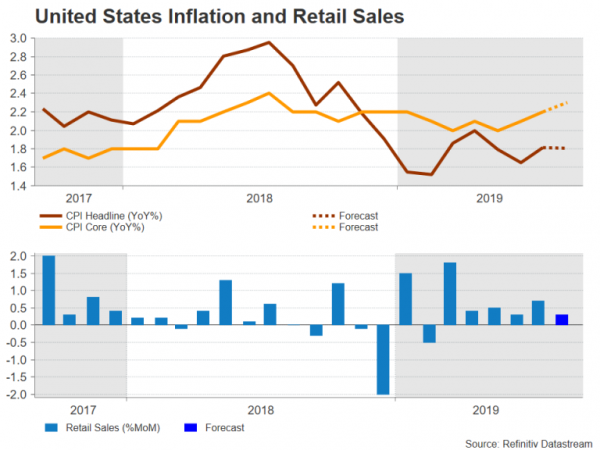 On Friday, retail sales and the University of Michigan’s preliminary reading of the consumer sentiment index will be closely watched too for proof that US consumers are still spending generously. In July, retail sales jumped by a stronger-than-expected 0.7% month-on-month. They’re forecast to have moderated somewhat to 0.3% in August.

EU Indices Up This Morning | TA Focus On Sanofi