It was a relatively quiet week for economic data. The September trade report had a bit of a dated feel since last week’s GDP report already confirmed that net exports were a drag on third quarter economic growth. Still, the report drove in the point of tariff-related volatility in trade activity. The trade deficit narrowed a bit in September as goods imports contracted more than goods exports. This reflected, in part, the impact of tariffs on a large tranche of consumer goods imports from China imposed on September 1st.

The ISM non-manufacturing report, on the other hand, ushered in a bit of optimism. The headline index followed its manufacturing counterpart higher in October, with the improvement broad-based across the subcomponents. While a bit better than expected, the October uptick was not large enough to offset the decline in the month prior. As such, instead of a major strengthening in the pace of expansion, the recent trend is more indicative of a stabilization in activity (Chart 1).

Other second-tier data reports did little to rock the boat. Of note, job openings continued to edge lower in September, reinforcing the notion that appetite among U.S. employers for labor, while elevated, has waned a bit recently. The September data also affirmed that the pullback in job openings so far has limited geographic breadth, with recent pressures concentrated in the Midwest.

With little else on the data front, trade negotiations had a free hand at driving headlines. On this front, there were signs of a de-escalation in trade tensions between the U.S. and other major trading partners, importantly the E.U. and China. Auto tariffs remain a major concern for the former, and President Trump is set to make a decision on the matter by next Wednesday. The U.S. Commerce Secretary recently stated that he expected negotiations with “individual companies about their investment plans” to bear fruit, making the imposition of auto tariffs potentially unnecessary. This suggests that the administration will avoid a major spike in tensions next week, either by taking a lighter approach on auto tariffs or by deferring action to a later date.

When it came to China, developments were more capricious. For starters, contrary to initial hopes, the Trump-Xi meeting to sign the ‘Phase One’ trade deal is unlikely to happen this month. On the other hand, it appears likely that the tariffs that were slated to go into effect in mid-December will still be scrapped (provided that the interim deal remains on track to be signed in the near-term). China’s Commerce Ministry spokesperson suggested that the two economic heavyweights had agreed to roll back existing tariffs in phases as trade talks advanced. But this morning, President Trump poured cold water on the notion of such an agreement, while also stating that he will not fully eliminate tariffs on China. This softened some of the optimism that had built from China’s earlier announcement, highlighting the delicate and volatile nature of trade negotiations.

All in all, there are indeed signs of a de-escalation in trade tensions, which help dilute some of the near-term risk as economic activity shows signs of stabilizing. But, as today’s events have shown, we caution against reading too much into the recent optimism, for as long as core issues remain unaddressed, a re-escalation in the trade war remains a distinct possibility. 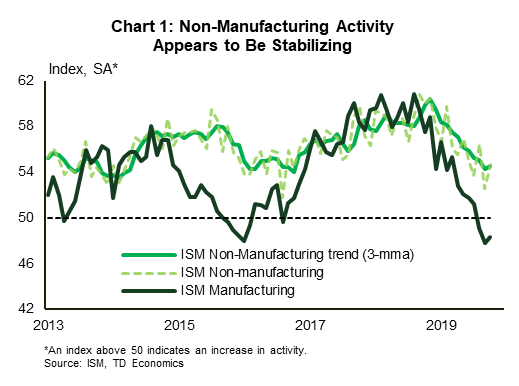 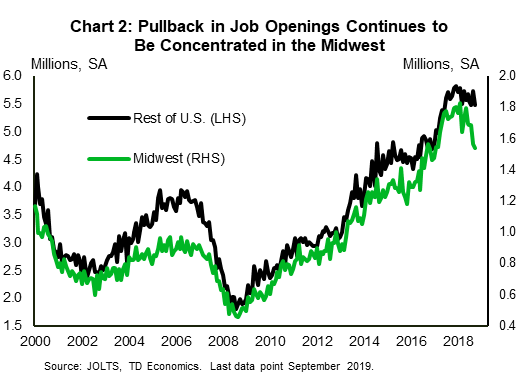 It was bound to happen eventually. After several months of surprisingly strong job growth, the Canadian labour market returned a little closer to earth, shedding 1.8k jobs in October. The modest pullback did little to slow the longer-term trend. Year-on-year (y/y) jobs are up 2.4% – the same reading as September, and the strongest rate since 2007. It is also well above the last reading of monthly economic growth (1.3% y/y as of August). At 5.5%, the Canadian unemployment rate is just a tenth off its historical low hit in May of this year.

Underneath the surface, the story is (only) slightly less ebullient. The discrepancy between soft economic growth and strong employment is reconciled in part by a softer trend in average hours among the employed. Even while most of the jobs created have been full-time (76% over the past year), they’re not quite as “full-time” as they used to be. That is to say, the average number of hours each employee is working has been falling. As a result, total labor hours are up by a softer, but still-decent 1.3% relative to a year ago, roughly in line with real GDP growth (Chart 1) and implying that labour productivity growth has been nil.

Still, there is little doubt that the Canadian labour market is tight. This is evidenced not only in near record-low unemployment, but also in vacancy rates that are at an all-time high. What is more, this finally appears to be coming through in wage growth. Average hourly wages were up 4.3% y/y in October. The strong pace of job growth is starting to show some staying power, it has printed above 3.7% every month since June. The acceleration is also evident in median hourly wages, up 6.9% year-on-year – the strongest growth rate on record (data back to 1998).

While the headline numbers may show some disagreement, the regional story shows more consistency between rates of economic growth and the strength of respective job markets. Provincial and territorial economic accounts for 2018 confirmed the disparity in growth between leaders and laggards. Economic growth was strongest in British Columbia (2.6%), PEI (2.6%) and Quebec (2.5%) and weakest in energy-producing provinces. On the other side, Newfoundland and Labrador contracted 3.5% in 2018 as major energy and infrastructure projects were completed. Meanwhile, Alberta’s growth rebound slowed dramatically, with real GDP growth moderating from 4.8% in 2017 to just 1.6% in 2018. Weakness in Saskatchewan continued, with growth of just 1.3% following a 1.7% outturn in 2017. The Saskatchewan economy didn’t fall nearly as much as Alberta’s during the 2015/2016 bust, but it has seen very little recovery to date.

This is a look in the rear-view mirror in terms of economic growth, but these differences have continued through 2019 and are mirrored in unemployment rates and job vacancy rates across the country. In Quebec, BC, and PEI, unemployment rates continue to hover near historical lows and job vacancy rates stand at historical peaks. Meanwhile, after an initial recovery period, Alberta’s and Saskatchewan’s unemployment rates remain elevated, over two percentage points above pre-2015 recession levels and have shown few signs of meaningful improvement. You can bet the political challenge this poses will continue to make headlines. 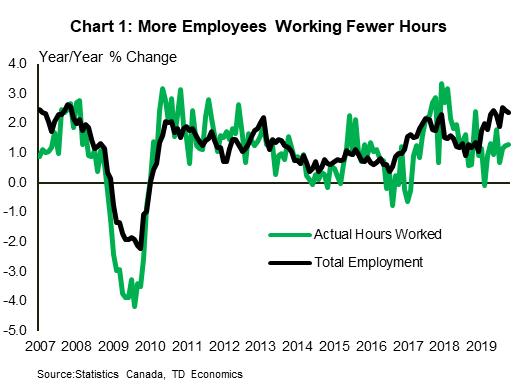 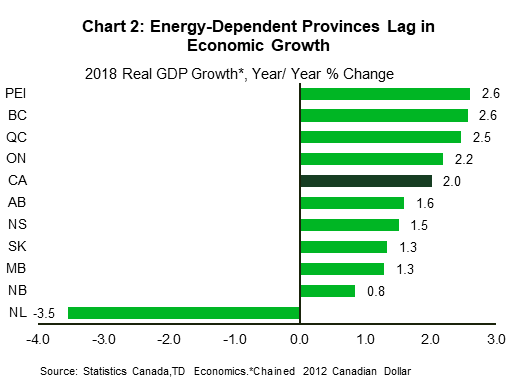 We look for headline inflation to remain unchanged at 1.7% y/y in October (0.3% m/m), partly aided by an increase in energy prices. Core inflation should decline a tenth to 2.3% y/y. We expect core goods inflation to recover m/m, but for core services inflation to slow to 0.2% m/m after four straight increases at 0.3%. We anticipate OER to advance at 0.2% m/m, following a 0.3% monthly gain, and also for the ex-shelter segment to slow modestly on a monthly basis. 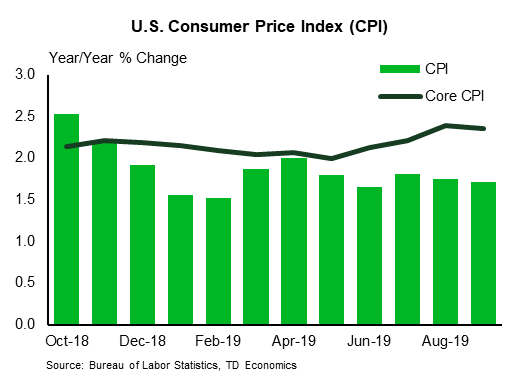 We look for retail sales to register a soft 0.1% gain for October as a decline in auto sales (-1% m/m) likely kept headline sales subdued. However, we expect a rebound in the control group (+0.3% m/m) to be the main driver of headline growth, reflecting still-solid consumer spending. Sales at gasoline stations should also boost growth on the back of a gain in gasoline prices in October. 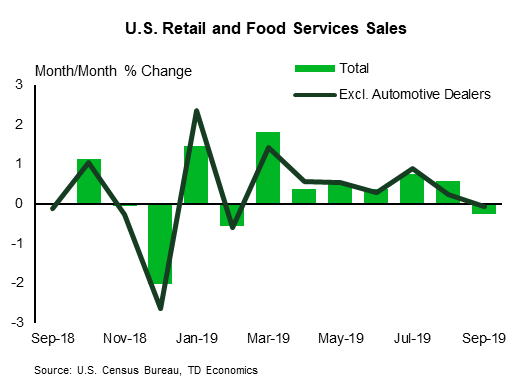