The pound strengthened against the USD, over Friday and during today’s Asian session, as news hit the markets that the Brexit Party could be standing down from more seats, which the Conservative did not win in the 2017 elections. Analysts also mentioned that cable’s reaction was a combination of USD weakness and a slightly more optimistic outlook for the pound. Boris Johnson repeated on Friday his intention “to get Brexit done”, while the Labour party announced its intentions to nationalize parts of British Telecoms, in order to provide full fiber internet connections for all. We expect debates to heat up the pre-election period, as Boris Johnson could try to pacify UK businesses, probably even tempting them with a possible corporation tax cut offer, while the Labor party could be issuing their manifesto. In the absence of substantial financial releases, the pound may be more sensitive to UK politics, which could sway its direction, depending on the headlines. Cable rose breaking the 1.2885 (S1) resistance line, now turned to support. Should the pair maintain its buying momentum, we could see an upward trendline being formed to support the pair’s direction. It should be noted that the RSI indicator in the 4-hour chart touched the reading of 70, signalling a possible bull dominance for the pair, while at the same time may be implying that the pair’s long position may be getting overcrowded. Should the bulls maintain control over the pair’s direction, we could see the pair aiming if not breaking the 1.3015 (R1) resistance line, which was the upper boundary of the pair’s sideways movement since the 21st of October. Should the bears take over, we could see cable breaking the 1.2885 (S1) support line and aim for the 1.2760 (S2) support level, which is the support of the pair’s sideways movement.

…while trade caution seems to characterise the USD…

Risk appetite seemed to be on the cautious side in the markets as despite some positive news, the reaction seems limited. Chinese media reported that there were some constructive ideas over a phone call on Saturday, yet reports may not have convinced the markets. On the contrary China’s central bank cut a key interbank lending rate on Monday, which some analysts characterized as the first easing step of its liquidity tools since 2015. The move followed a sharp acceleration of China’s CPI rate for October, which worried investors about the bank’s ability to provide stimulus in the near future. In a report the PBOC announced that it will maintain a prudent policy in order to keep inflation from spreading. We expect more headlines to characterize the coming week and if on the positive side could provide a lift for the USD and the Aussie. USD/JPY continued to rise after bouncing on the 108.35 (S1) support line on Thursday, aiming for the 109.00 (R1) resistance line. Should the pair’s upward momentum be sustained we could see it breaking the 109.00 (R1) resistance line and aim for the 109.70 (R2) resistance level. Should the pair come under the market’s selling interest in a possible risk off environment of the market, we could see it aiming if not breaking the 108.35 (S1) support line and aim for lower grounds.

In a rather slow Monday, we get New Zealand’s PPI rate for Q3. Also during the Asian session, the minutes of RBA’s last meeting are due out. As for speakers, ECB’s Lane, Cleveland Fed’s Mester and RBA’s Kent speak.

As for the week ahead

On Tuesday, we get UK’s CBI trends for orders for November, from the US the number of building permits and housing starts, both for October, while from Canada we get the manufacturing sales growth rate for September. On Wednesday, we get Japan’s trade data for October, Canada’s inflation rates also for October and the Fed’s minutes are due out. On Thursday, from the US we get the Philly Fed business index for November and the US existing home sales for October. On Friday, the Australian, European and US PMIs for November are due out, while from Japan we get October’s inflation rates and from Canada the retail sales growth rates for September. 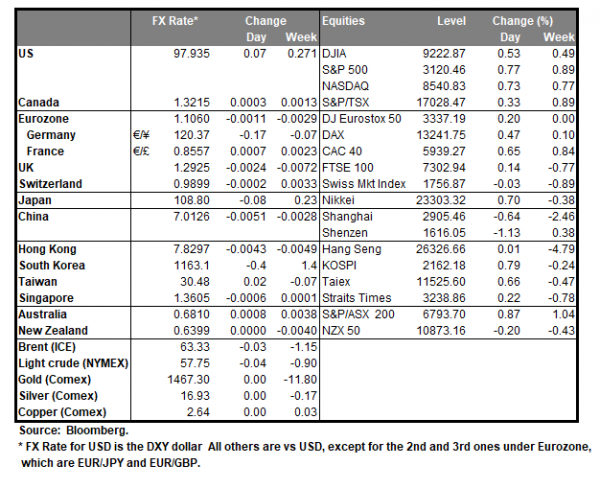