The main event will be the UK general election on Thursday, which could decide what form Brexit takes and shape the pound’s fortunes for months. Central bank meetings will serve as a prelude. The Fed is set to keep rates unchanged, and may reinforce the message that it will remain on hold for a while. The ECB will hold its first gathering under the leadership of Christine Lagarde, but is unlikely to provide any fireworks. Instead, trade news could dominate, with the White House expected to decide whether it will fire another volley of tariffs on December 15.

UK election: Get ready for explosive moves in the pound

In Brexit land, all eyes will be on the general election. The results will start to roll in early on Friday, at around 02:00 GMT. Opinion polls suggest the Tories are going to run away with it, as they are leading Labour by ten percentage points on average. However, things are not so straightforward. Remember, a very similar situation played out back in 2017. Every pollster had the Conservatives securing a clear majority in Parliament, but Labour ultimately smashed expectations and denied the Tories that majority.

Polls are inherently unreliable in predicting UK elections, due to the nation’s first-past-the-post system. It means that the seats won by each party in Parliament don’t depend on the percentage of the total vote they received nationwide, but rather on how those votes are distributed regionally. The bottom line is, take UK polls with a pinch of salt. They are useful for gauging sentiment, but don’t accurately translate into seats in Parliament, which is what determines who governs. 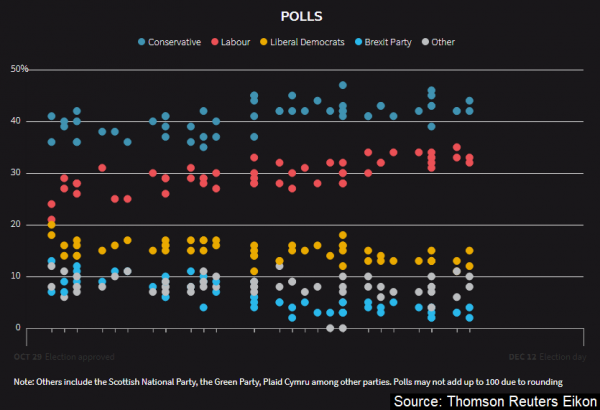 As for the market reaction, a clear Tory majority would be the most bullish outcome for the pound. It could end Britain’s political paralysis and allow the Brexit process to move forward, alleviating some of the uncertainty that has haunted the economy. The most catastrophic outcome would be a hung Parliament, where no party gains a majority. It would imply even more deadlock and uncertainty, much like this year.

Now in terms of how the risks are distributed, the pound has moved higher lately on growing expectations for a strong Tory victory, which implies that this is now the market’s baseline scenario. Therefore, sterling could still soar in that case, but any gains may be smaller in magnitude compared to the losses the currency may record on a hung Parliament, as that would catch investors by surprise. For example, Cable could approach the $1.35 region if the Tories win big, but perhaps drop towards the $1.25 territory on an inconclusive outcome, from $1.31 currently.

In the States, the spotlight will fall on the Fed meeting on Wednesday. Markets are confident rates will be kept unchanged, pricing in no chance of a rate cut, as policymakers have been clear that they will stay on hold for some time – unless of course economic data deteriorate. Hence, the market reaction will depend on the updated economic forecasts, the so-called ‘dot plot’ where policymakers submit their interest rate projections for the coming years, and Chairman Powell’s remarks.

Overall, there’s no real argument for the Fed to deviate from its neutral stance. The economy has lost momentum amid weakness in manufacturing and investment, but the overall picture is still solid. Consumption – the backbone of US growth – is healthy, supported by growing real wages and a tight labor market. Meanwhile, the truce in the trade war is holding, and there’s a real prospect for more de-escalation if the much-touted phase one deal is reached soon. 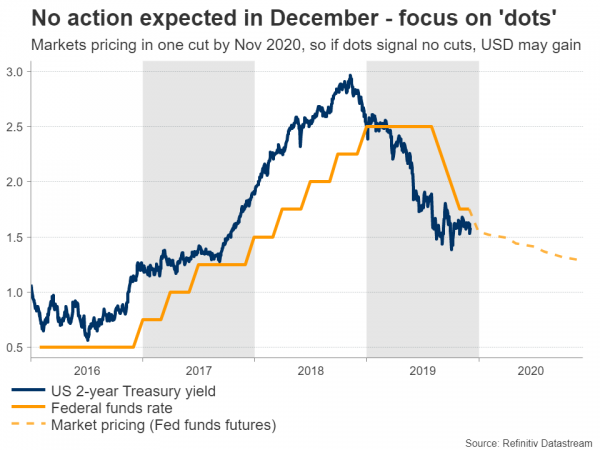 All told, Powell is likely to ‘hold the line’ and reaffirm that the Fed will only act again if the situation demands it, something that currently doesn’t look likely. Assuming the dot plot paints a similar picture, with the Committee signaling no rate cuts next year, that could give the dollar a shot in the arm as easing expectations are priced out. At the time of writing, markets are fully pricing in one more quarter-point cut by November 2020.

As for the data, CPI inflation figures for November will see the light on Wednesday before the Fed decision. Retail sales numbers for the same month will follow on Friday.

The European Central Bank (ECB) announces its own decision on Thursday, and not much is expected either. After delivering a stimulus package back in September that several policymakers opposed, investors have concluded the Governing Council is so fragmented that there’s almost no prospect of further action in the coming months, even if the struggling euro area economy could use some more ‘juice’.

Chances are that Christine Lagarde will pick up where Mario Draghi left off, and spend most of her time calling on national governments to launch a fiscal stimulus package that kickstarts growth. Judging by recent comments from Chancellor Merkel, that remains unlikely, so Lagarde’s calls will probably fall on deaf ears. 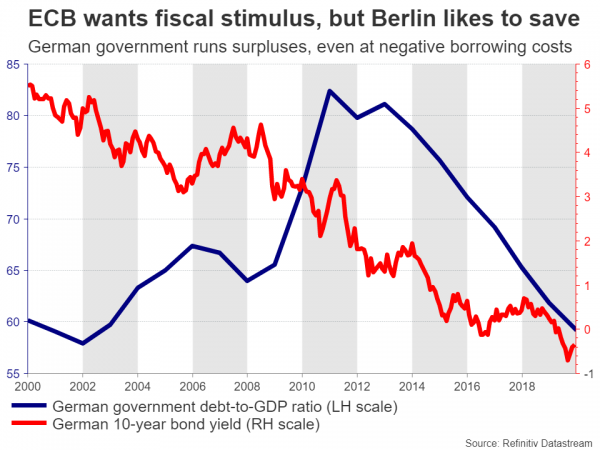 The joker in all this, is Germany’s SPD party. It is currently in a coalition government with Merkel’s CDU, but has recently changed its leadership, with the new leaders demanding much higher spending – on education, infrastructure, and green energy – for the alliance to continue. Hence, Merkel now faces a choice: increase spending or go to new elections. Make no mistake, this is the biggest variable for the euro. Any signs that substantial fiscal stimulus is coming could see the currency stage a spectacular rally. Until then though, the outlook remains grim.

On the data front, Germany’s ZEW survey for December is due on Tuesday.

In the world’s second-largest economy, trade data for November will be released over the weekend, and inflation figures for that month will follow on Tuesday. Markets typically pay most attention to exports and producer prices – the former seen as a gauge of global demand and the latter of factory activity in China.

While these could be important for global risk appetite, the main factor will be what happens in the trade saga. This week is crucial because unless a ‘phase one’ deal is reached – or at least appears imminent – then the Trump administration will slap tariffs on almost all remaining imports from China on December 15. 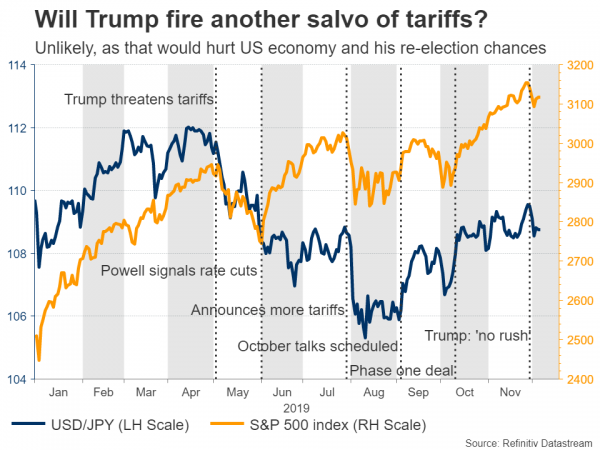 How likely is that? Markets appear confident it won’t happen. Both sides want this ‘skinny’ deal – Trump to score a victory before he hits the campaign trail and China to alleviate some economic pressure. Also, markets are calculating that the last thing Trump wants is to really hit the US consumer and risk hurting the economy. A weak economy certainly doesn’t help Presidents get re-elected.

The most likely outcome may be Trump postponing the tariffs, not cancelling them, which could prove somewhat neutral for risk sentiment. However, the risk is clearly that he pulls the trigger, something that would generate another wave of risk aversion.

In Switzerland, the local central bank will announce its decision on Thursday. Not much is expected, with markets pricing in a negligible chance for a rate cut, even though Switzerland has fallen back into deflation. Since the SNB already has the lowest rates globally, it doesn’t have many ‘bullets left in the chamber’. Maybe it can cut rates once more, but that’s it, and investors don’t think this is the time. 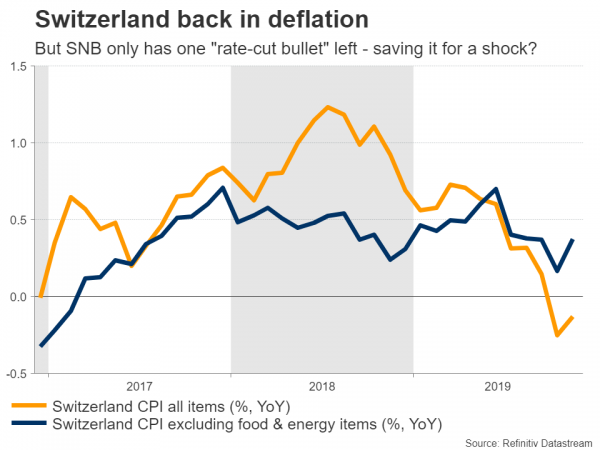 Most probably, the SNB will reiterate that it’s prepared to cut rates if needed, but that it will continue to use FX intervention as its primary tool to keep the franc from appreciating. A reinforcement of the easing bias may hurt the franc, but only slightly, as this is what investors expect already.

Finally in Japan, the second reading of GDP for Q3 will be released early on Monday, while the BoJ’s Tankan survey for Q4 is due on Friday. However, the yen is usually oblivious to economic data – what matters most for the haven currency is global risk appetite and therefore how the trade war plays out.

The Losing Momentum Of World Markets And Economic Recovery